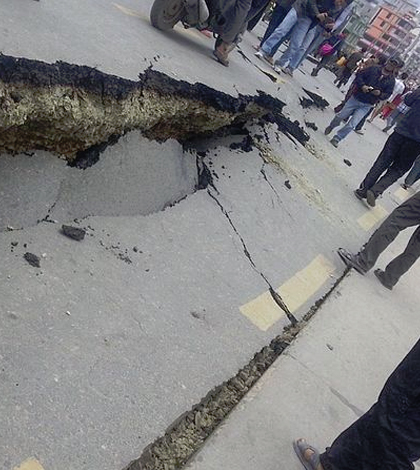 Damage done during the Nepal earthquake of 2015. (Credit: Krish Dulal/CC BY 4.0)

The mobile devices that vibrate incessantly in millions of pockets around the world could help predict tremors on a much larger scale. The GPS receivers in smartphones and similar devices, while not as sensitive as scientific-grade instruments, could combine to act as an early warning system against large earthquakes in regions where they are widely used, according to a U.S. Geological Survey release.

Studying data from Japan’s 2011 Tohoku-oki quake and a simulated event on California’s Hayward fault, USGS researchers proved that a smartphone-based warning system is a viable alternative to other early warning systems. Their findings were published online in Science Advances.

Earthquake early warning systems can save lives and protect property from quakes and tsunamis, but are often expensive to implement. In fact, only a handful of countries maintain these systems, including the U.S., Japan and Mexico. Developing countries top the list of the world’s most earthquake-prone regions, creating a particular need for early warning solutions that exists independently of infrastructure.

Such a system would utilize the GPS receivers and accelerometers in smartphones, issuing warnings before strong quakes begin. The study found that only a small percentage of smartphone users in an area need to participate for a system to work — on the order of a few thousand people in a large city — but only earthquakes around magnitude 7 or larger are strong enough for the devices to detect.

In countries such as the U.S., where comprehensive early warning systems already exist, smartphones could provide crowdsourced augmentation and offer alerts in regions with less coverage.

“Thirty years ago it took months to assemble a crude picture of the deformations from an earthquake,” Heaton said in the release. “This new technology promises to provide a near-instantaneous picture with much greater resolution.”

Featured Image: Damage done during the Nepal earthquake of 2015. (Credit: Krish Dulal/CC BY 4.0)