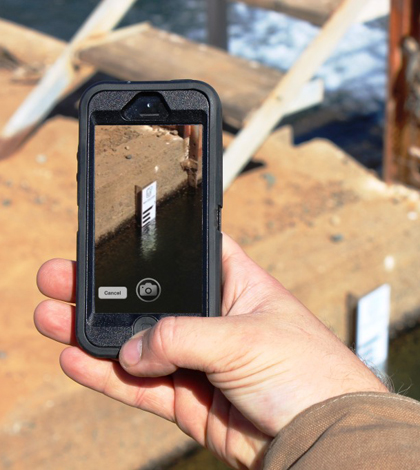 In the developing world, where people often turn to low-tech solutions for the challenges of rural life, mobile phones are an outlier. In some low-income countries, cellular networks are more available than electricity or paved roads.

“They’ve kind of jumped several stages of development to get there,” said Jeff Davids, California-based water resources engineer. “I’ve seen people plowing the field with oxen, talking on a cellphone.”

Davids is the founder of SmartPhones4Water, an initiative he hopes can take advantage of widespread cell phone use in developing countries to address what he sees as something of a paradox in water management in those areas.

Unlike in the United States, where Davids said people tend to think food comes from the store and water from the tap, the connection between water and every little facet of life remains palpable in the rural nations he’s visited. Yet the places where that connection is most obvious is also where water resources are the most poorly managed.

Part of that is a lack of data, he said. When he’s hired as an engineer for a project in the U.S., the first thing he does is just start mining data.

“Often times, we complain that there’s not enough, but there’s still this wonderful treasure trove of at least some information,” he said. “We can kind of piece the story together about the hydrology of different watersheds and water quality.”

But it’s much harder to find that information in developing nations, Davids said. And that can lead to conflicts both within and between nations. For example, it’s difficult to develop fair international treaties for sharing water in border-crossing rivers without data on annual flows.

That’s where Davids hopes SmartPhones4Water can make a difference. The program is based on server-side software that can generate stream discharge measurements from photos of staff gauges captured and sent from camera- and GPS-enabled phones. Where the staff gauges are installed, statistical relationships between water levels and discharge are calculated and loaded onto the server. When a photo comes in, image processing software reads the measurement on the staff gauge. The GPS tag indicates which site and rating curve the software should use with that level measurement. The server sends a message back to the user with a flow measurement for verification. “One of the wonderful things about the technology is it lowers the bar as far as who can collect accurate, verifiable data,” Davids said. “Really, anybody can. If you can take a picture of your nephew, then you can take a measurement of the water.”

The program is in the very early stages and still faces some questions, which Davids and the SmartPhones4Water team plan to address in pilot projects in the U.S. and Nepal over the next few years. Some of those questions are scientific, like assessing how manually acquired data collected periodically from many sites across a watershed compares to data from robust, continuous monitoring stations from just a few sites in a watershed.

Once the program is up and running, the Smartphones4Water website will serve as an information hub and help collect smartphone donations to help get the tools into the hands of farmers, students and anyone else interested in doing the monitoring. Eventually, the monitoring work could be a means of employment in regions where people survive on a dollar or two per day, Davids said.

That would be a fine benefit to a program that could also bring flood alerts and water management to the places that need it most.

“There are unbelievable water resources all over the world. We just lack the information that’s really necessary to manage it well,” Davids said. “It would be like going to the doctor and not having the vital signs.”