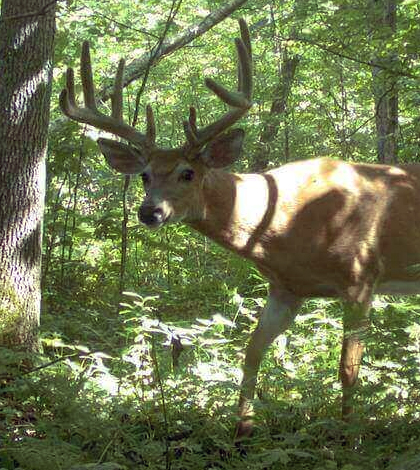 A buck treads cautiously in the woods. (Credit: Snapshot Wisconsin)

Many projects have used cameras to document the presence of wildlife in certain areas, but few compare to the scale of Snapshot Wisconsin, a citizen science project using trail cameras to study wild animals living throughout the state. Instead of a few cameras, the project is relying on more than 4,000 of them planned for launch in coming months.

Those leading the project say that the sheer scale of the operation along with the number of cameras involved makes it unique. As of mid May, some 500 cameras had been deployed, mostly in Iowa and Sawyer counties, the first two counties in the state to take part. Several hundred more cameras will be deployed in the near future as the camera network scales up.

Each camera has been strategically placed near trails in Wisconsin, along with GPS devices, where different forms of wildlife pass by. These are complemented by remote-sensing satellites and a database of knowledge provided by volunteers who help to identify the types of animals recorded by the trail cameras.

Researchers say that Snapshot Wisconsin will add a consistent way to monitor all of the state’s species. And that consistency will allow for comparisons among wildlife populations and make it possible to better track population changes on larger scales.

In particular, the Wisconsin Department of Natural Resources (DNR) plans to use Snapshot Wisconsin data to help inform county deer advisory councils on deer and their predators. It will supplement existing programs that currently monitor and estimate population sizes for different species. A bobcat strolls through the shade. (Credit: Snapshot Wisconsin)

If successful, the project may reduce the need for other more expensive types of wildlife monitoring. For example, the DNR now measures wildlife species like coyotes and deer using airplanes over parts of the state.

But from a scientific view, the project will help researchers model Wisconsin’s wildlife populations in ways that have previously been unimaginable. There will be more dynamics to consider and an improved perspective covering seasonal changes.

Images captured by the thousands of trail cams will be compared with images and data from NASA’s Terra, Aqua and Landsat satellites. The GPS locations from the trail cams will let researchers sync data from any one trail cam with satellite images of the landscape. The satellite perspective gives researchers the ability to fuse camera data with remote data on ecosystems, habitat and land-use types.

Satellite data may also be used to match changing snow cover, spring “green up,” or the fall colors with shifts in patterns of wildlife presence and density. For example, bears tend to head into hibernation as the landscape browns in fall. Seasonal changes on the landscape can also provide insights into deer births.

Animals track the seasons, researchers say, meaning that the greening of the landscape in spring often coincides with an uptick in animal activity. By using satellites, they may be able to see what that pattern looks like across the whole of Wisconsin.

Another goal of the research project is to uncover weather or climate trends from all of the Snapshot Wisconsin data. For example, the images may be able to document changes in extent and duration of snow cover and how wildlife respond.

The trail cams will produce millions of photos a year and the Snapshot Wisconsin team is depending on citizen scientists to help crowd source analysis of pictures by making them available through a portal online. Managers are also recruiting volunteers to be trained by the University of Wisconsin Extension to operate and maintain the camera installations.