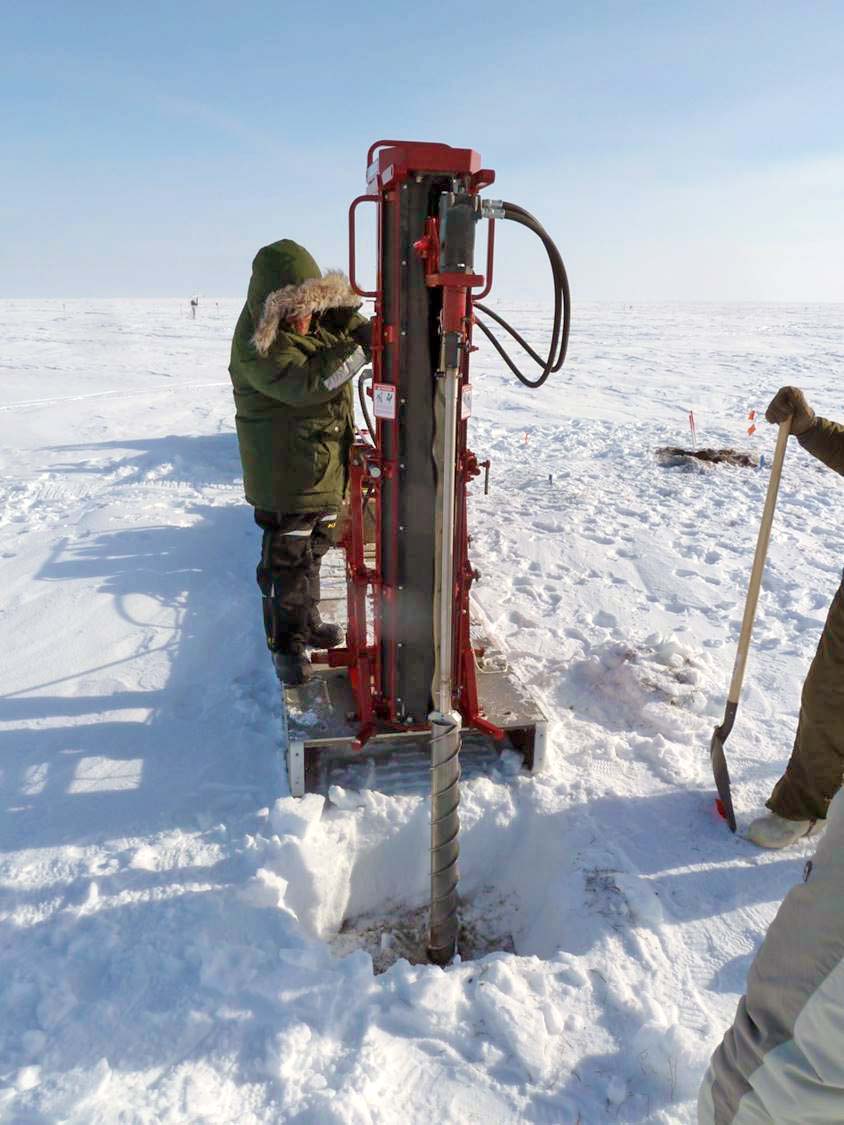 The tundra continues to warm up in the Arctic as climate change continues. While researchers agree that the increase in temperature will lead to carbon being released that was previously stored in the frozen tundra, a factor many researchers underemphasize is the role of soil moisture in the carbon release process, and how it can mean a huge difference in the severity of global warming in the future.

“Wetter soils often prevent oxygen from reaching the microorganisms that degrade soil carbon and produce carbon dioxide. Instead, the soil microorganisms produce smaller quantities of methane, a more potent greenhouse gas. That means more carbon will be released from drier tundra than from wet tundra.” explains David Graham, Group Leader in Microbiology and Ecology at Oak Ridge National Laboratory (ORNL). “So whether the soil is wet or dry turns out to be an important consideration when we try to model future climate change behavior in the Arctic.”

A team of researchers from 21 institutions described the effects of oxygen on greenhouse gas production from Arctic soils. Its impact on carbon release was published in the journal Nature Climate Change. The international team led by Northern Arizona University researchers included results that Graham and his collaborators previously collected using samples taken in the harsh climate of Alaska’s North Slope.

Frozen cores were taken about 1 yard down from the surface. The cores were divided into three or four sections representing soil horizons, distinct layers of soil based on mineral and organic matter content.

Graham and his team also kept the soil cores away from oxygen in the air by using a giant plastic bubble around the core samples, which allowed them to keep the samples in an anaerobic environment like the soil underground where they had originated.  The vinyl chamber protecting the samples was made by Coy Laboratory Products in Grass Lake, Michigan. 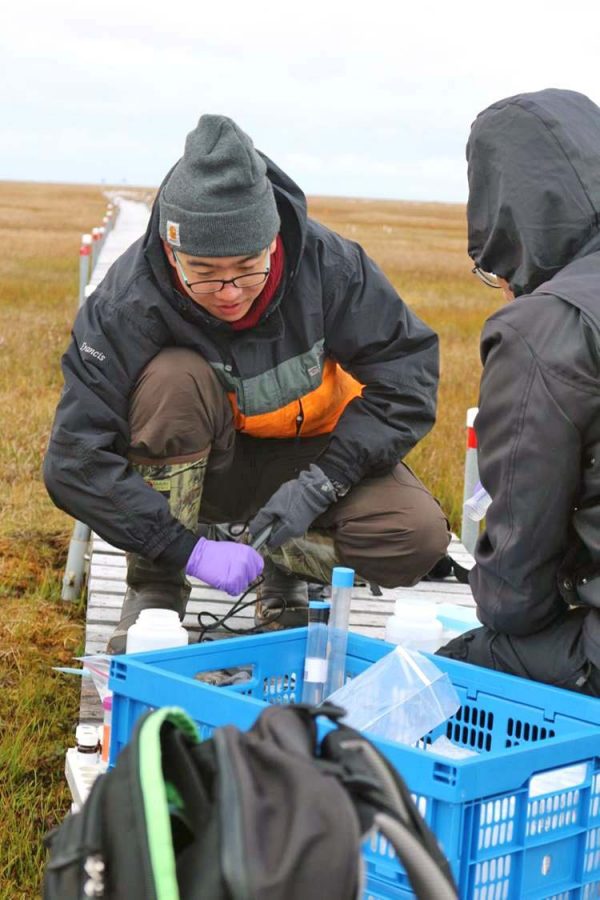 Total carbon and total nitrogen were obtained using LECO TruSpec combustion-based measurements. The soil pH was measured using a pH meter, and dissolved iron was measured using Hach iron reagents. “We were very interested in the iron measurements because the iron levels are an indicator of how much oxygen is in the soil and how the microbes are using it. The soluble Fe2+ and insoluble Fe3+ ion concentrations give us that information,” Graham explains.

Graham and his team began their investigation of Arctic soil moisture and the link to carbon release because of an interest they perceived in the ecological and climate change community. “Researchers found that they got very different carbon release behavior depending on whether the Arctic soil was wet or dry. Clearly that could lead to big differences in climate change model predictions. It was obviously something that needed more investigation.”

The contribution of methane versus carbon dioxide to greenhouse gas concentration also needed to be accounted for. “Methane has a much higher warming potential,” Graham explains. “We needed to understand how methane and carbon dioxide were contributing separately and how soil wetness or dryness influenced their contributions.”

Although Graham took many soil samples in Alaska’s North Slope, many other areas were represented as well. “Altogether, there were hundreds and hundreds of samples in the study,” Graham mentions. “Samples came from Alaska, Canada, Siberia and other areas across the Arctic.”

A factor Graham considers in his soil wetting and drying research which isn’t always included by other researchers is the phenomenon of thermokarst, which is when soil collapse occurs due to permafrost ice melting. “Thermokarsts happens when there is soil with underlying permafrost, and the ground ice starts to melt. When melting happens, the soil is destabilized and it collapses, making a wetter, more anoxic environment than before,” Graham mentions. 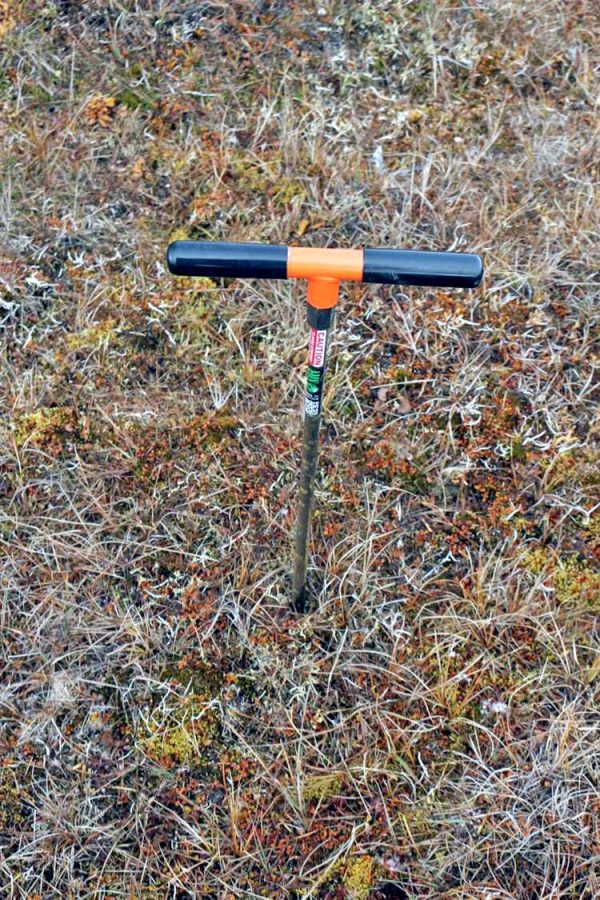 In the soil wetting and drying field of study done by ORNL, some new technical approaches may hold some promise. Graham and his colleagues might go to field deployable gas analyzers and mid-IR laser systems. “Currently a fair amount of analytical work is done at ORNL,” says Graham. “It would be great to do more directly in the field.”

Some of the soil sample analytical work is already done in the field, such as the pH, temperature, Hach soluble and insoluble iron measurements, and Decagon soil water content measurements. “They can all fit in a backpack,” says Graham.

Not all of the techniques used in the soil wetting and drying study are likely to go mobile, however. Soil incubations typically last 2 or 3 months and involve incubating soil in closed vials to examine carbon dioxide and methane release due to microbial metabolism and temperature changes. Gathering incubation experimental data would not currently be feasible in a mobile setting. In addition to the long incubation times, gathering good soil incubation data also requires tight temperature controls of -2, 4 or 8 degrees Celsius.

While Graham and his colleagues have not explored the identities of individual microbial strains that are responsible for carbon dioxide and methane production in Arctic soil, there are a few types of microbes that have been implicated in other studies, namely methanogens and clostridia. “We’re focused on the microbial community, not individual microbes,” says Graham. “We want to know how they are acting as a group, and how they are influencing the carbon cycle.”

Studying soil moisture in the Arctic was not without surprises. “We did not expect that the rate of response for the gases would be so different. We found that the microbial consortia produced carbon dioxide right away, but produced methane significantly later. That made us suspect methanogens were more sensitive to freeze and thaw cycles than other types of microbes. We also realized we needed to consider the timing of ground thaws because that seemed to be important to soil microbe behavior.” 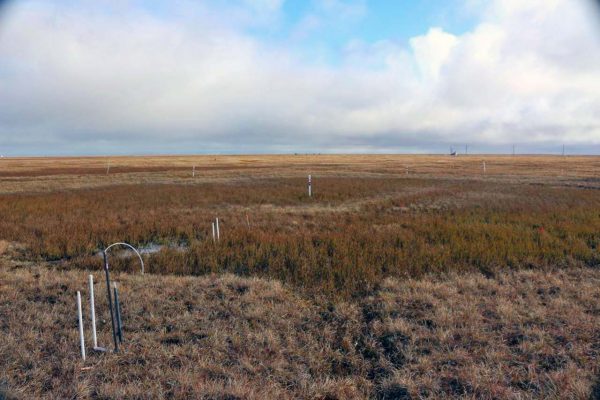 Graham and colleagues Colleen Iverson, Baohua Gu and Rich Norby are part of a large Next Generation Ecosystem Experiments in the Arctic project, headed by ORNL principal investigator Stan Wullschleger. This multi-institution project is devoted to improving how Arctic systems are represented in climate models. It is supported by the U.S. Department of Energy’s (DOE) Office of Biological and Environmental Research and involves more than 100 people at different locations. Graham also wants to specifically thank former ORNL post-doctoral researchers Taniya Roy Chowdhury, Victoria Sloan, Elizabeth Herndon, and Ziming Yang for their efforts on the project.

Community outreach is also an important part of Graham and his colleagues’ work. Project members regularly talk with Utqiaġvik and Nome Alaska communities about climate change, soil research and other topics pertinent to the Arctic. They have discussed the project with all ages, giving talks to third graders all the way up to village elders. “We do our best to engage the communities where we do research,” says Graham. “It has been a very rewarding experience. The Arctic is an exciting place to work!”