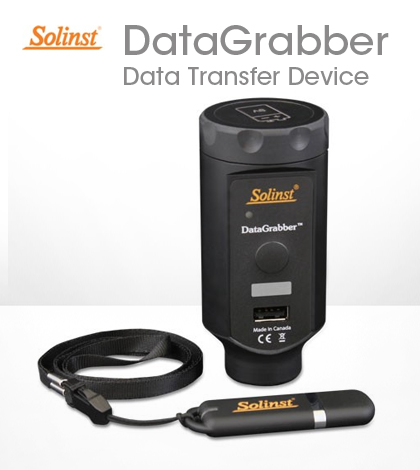 Solinst has debuted a new device for environmental pros who need a simple and easy way to transfer data from Solinst Leveloggers. Called the DataGrabber Data Transfer Device, it is a robust and straightforward piece of tech that does what it’s supposed to do without hassle.

Like the name suggests, the DataGrabber takes data off Solinst Leveloggers and transfers them via USB to memory sticks of any make. It is an alternative to the company’s App Interface device that can gather data and send them to mobile devices via Bluetooth. What sets the DataGrabber apart is that it utilizes a direct connection to make transfers and is well suited for long-term projects involving stationary Leveloggers and routine site visits.

The DataGrabber’s design and function are the result of careful and tedious development by the crew at Solinst. To put it all together, they considered what would help customers the most.

“We always develop things based on customer feedback,” said Tricia Lane, marketing coordinator at Solinst. Both the App Interface and DataGrabber will eventually replace the Solinst Leveloader, she says, which is an older data transfer device that’s being phased out.

The DataGrabber is a great accessory for deployments involving monthly or quarterly site visits, Lane points out. Users can “take the DataGrabber to the field, download the data and take it back to the office.” The new DataGrabber makes it even easier to transfer data. (Courtesy of Solinst)

There are two ways to connect to the device. One is by using a direct-read cable that hooks up to Levelogger sensors without forcing users to remove them from wells. The cables are available in many standard lengths and have a high-density polyethylene outer jacket for durability. For wells with 1-inch openings, they also feature an upper-end connector that acts as a well cap, built in and ready to go.

The second connection option involves using direct read to optical adapters, which are perfect for when long cables aren’t needed. They act as the go-between connecting DataGrabber to logger and are compatible with Solinst’s full line of 3001- and 3002-series Leveloggers. “These are convenient for people who have deployed loggers on a wireline,” said Lane.

After connecting to a logger, using the DataGrabber can’t get much easier. “Just enter the USB (stick) into the DataGrabber, then press the button and data will begin to transfer,” said Lane. “It’s as simple as that.”

The process is also aided by an LED light that tells users what the DataGrabber is doing throughout the transfer. It flashes when the device is ready to download, when it’s sending data and when transfers are complete to the USB, delivered in .xle file format to be compatible with Solinst software. “It’s convenient because it (the LED) shows exactly what the DataGrabber is doing,” said Lane.

The device’s straightforward operation goes hand in hand with its design. It is so streamlined that users can actually slip the DataGrabber into a pocket for easy transport to and from field sites. The accessories that go with it, like an included 512-megabyte memory stick, are also as portable in that way.

Upping the convenience further is the minimal maintenance needs of the device. It runs on an easy-to-swap 9-volt battery, as well as lithium rechargeables. But there’s not much more to fret over than that. A fully charged battery will support 60 full data downloads, says Lane, which can last quite a long time for projects that need data once a month or at another long-term interval.

Putting all those things together, “the overall convenience of the DataGrabber is probably its best feature,” said Lane. “Just the fact that it’s so compact that it actually does fit in your pocket.”