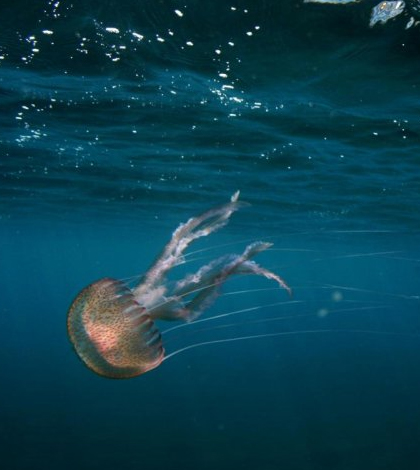 A jellyfish living in high CO2 waters near volcanic seeps in the Mediterranean. (Credit: Jason Hall-Spencer)

Climate change, including higher carbon dioxide levels and ocean acidification that comes with it, creates winners and losers in the global marine ecosystem, according to a University of Plymouth release.

Japanese kelp, stinging jellyfish and “killer” algae are some of the species that are tolerant of higher carbon dioxide levels and thrive as the levels increase. The soft species are able to tolerate higher levels of carbon dioxide because they are not dependent on hard structures for survival like coral. Coral reefs can also begin to dissolve when carbon dioxide levels become too high.

Other species seemed to be both helped and hurt by the more acidic conditions, such as the American slipper limpet and the Red King Crab, which have become more invasive as acidity increases but also have experienced reduced larval viability.

Observations for the study were based on high-temperature and more-acidic environments around volcanic vents in the Mediterranean Sea, which showed increases in invasive species.