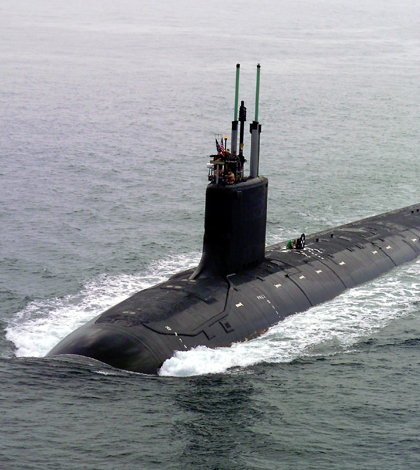 Light isn’t known for its abilities to travel well under the water. But sound has no problem achieving that task, which is why researchers, disaster responders and world navies rely on sonar to see what sits deep below. In the future, the reliability of this tool may be tested, however, as the effectiveness of sonar in warming oceans is put to the test.

That doesn’t only depend on water temperatures — the speed of underwater sounds can be impacted by salinity and pressure also — but changes in temperature still constitute the biggest factor affecting sonar. And so understanding those changes will prove important in assessing impacts on underwater sound speeds.

For navy operations, understanding sound speeds is crucial for transmitting messages, detecting enemy submarines and avoiding marine animals. The big question is how will climate change’s effects on ocean temperatures alter how quickly sounds can move through the ocean.

It is a relatively new issue to face, as climate change has become more and more impactful to the oceans in just the last 15 years. But experts at Woods Hole Oceanographic Institution, who are working to stay ahead of it, say that the temperature changes have still been significant enough that the movements of sounds underwater have already changed.

Scientists at the institution, with funding from the Office of Naval Research, are using a torpedo-shaped autonomous underwater vehicle to study temperature’s influence on sound speed. Much of their work is taking place off the continental shelf south of New England, which is a complex ocean environment for study complete with changing stratification and shifting shelfbreak fronts.

The underwater vehicle emits sounds that are picked up by receivers deployed nearby. Since sound travels faster or slower depending on water temperature (faster in warmer and slower in cooler), scientists are measuring the exact speeds of different temperatures. The hope is to turn those measurements into better sonar communication and detection tools in the future.

This is important for the U.S. Navy because submarines have become more challenging to detect. As technology has improved over the past few decades, it’s become even more difficult to discover underwater craft and warmer waters could make that detection more challenging. That is also more complicated because the ocean is getting noisier with commercial ships. And there is another issue of filtering out noises from oil platforms, fish or other creatures.

The work is ongoing, but researchers note that a few trends have become apparent. Longer-term warming, on the decadal scale, is affecting shelf water temperatures and sound-speed profiles. They’ve also found some effects coming from farther away, as the Gulf Stream brought warm core rings to the continental shelf between April 2014 and December 2015. These diverted the shelfbreak front at times.

Results of the work may one day be useful in locating missing planes underwater as black boxes on airplanes send out bursts of sound. Underwater sound speeds are also important for preserving the health of wildlife as major shipping routes and oil platform construction take wildlife into consideration. By mapping the speed of sound, scientists may be able to prevent harmful noises from traveling far enough to mess up migratory patterns or disturb mating grounds.