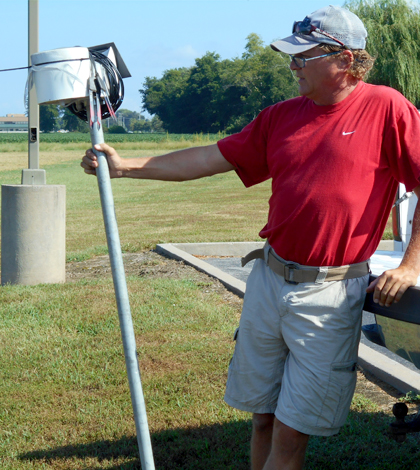 Michael Aide is the chairman of Southeast Missouri State University’s Department of Agriculture, and he is experimenting with a piece of equipment that could conserve precious groundwater resources, save growers money and teach students about various aspects of on-the-farm water management.

That piece of equipment is a soil electronic sensor system made by Pessl Instruments. It was installed at Southeast Missouri State University’s David M. Barton Agriculture Research Center in July of 2015 and then at the university’s Sikeston campus in September.

The Missouri Bootheel, where this research is taking place, is the southeastern-most part of the state. The Bootheel is situated in an alluvial basin, which is where soil is created by rivers depositing all kinds of sediment including sand, silt and clay. This means that farmers in the region “have all soil types imaginable,” according to Aide, and so must tailor their irrigation plans to the type of soil they have to work with.

Of course there are many ways that a farmer can irrigate a field, but two tend to work best in the Bootheel according to Aide: “…furrow irrigation where we use poly-pipe to trickle water on a graded land down between the rows and the other is center-pivot irrigation.” The soil electronic sensor system is used in concert with a center-pivot irrigation system, but it is still important to understand when a grower would choose to use this type of system over furrow irrigation in the first place.

The machine in question has five components. The first is a solar panel that provides the energy needed to keep the sensors working. Next, a transmitter sends the data to a satellite so they can be retransmitted to a computer or smartphone. The actual data-collecting parts of the instrument include soil temperature and moisture probes at 6, 12, 18 and 24 inches, a rain gauge and an air temperature probe.

The data are collected every hour and monitored daily. Once they are sent to a computer or smartphone, the accompanying software can estimate soil water evaporation, disease and insect growth potentials and net photosynthesis. Aide noted that having all of that information, along with the ability to turn the water on and off, at his fingertips is convenient, “But there’s no substitute for visiting your field and monitoring your field.”

Given that “60 percent of the acreage of the Bootheel is irrigated,” as Aide said, it is easy to assume that producers in the area routinely experience depleted aquifers. This, however is not necessarily the case, says Aide.

“In Southeast Missouri we are one of the few areas where we actually have an abundance of aquifer water to the point that we actually, for the most part, have too much water,” said Aide, which isn’t true everywhere. “But immediately south of us in the state of Arkansas, they have substantial overdraft issues and therefore these kinds of technologies will mitigate using water uneconomically.”

Regardless of how close a particular grower’s water table is to the soil surface, irrigating a field always requires energy and money. Aide addressed this issue by stating that, “What we desire is to be able to irrigate efficiently so that we don’t water too frequently, which is a problem and we don’t over-irrigate at any one time, which can also be a problem.”

Aide says the sensors and software system also have applications in the classroom. “One might be water management where we simply teach them (students) how to use the irrigation. But the other might be in crop physiology where we’re trying to show them how water influences photosynthesis that then drives yield,” he said.

But the real benefits come through temperature and moisture data that can be fed into plant disease and pest models to predict outbreaks. “What it really gives the grower is they start understanding the water dynamics in their own soils without them having to become soil physicists,” said Aide.