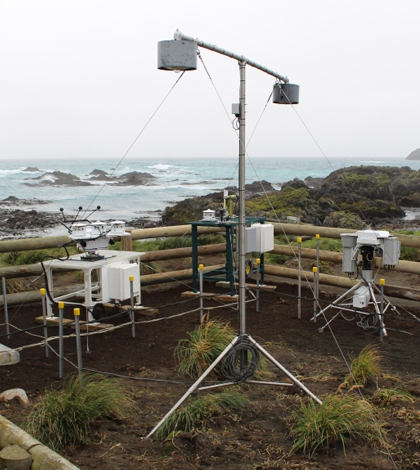 Instruments, installed in late March, will record just how cloudy it is in the Southern Ocean, how much sunlight reaches the surface, and how much water is in the clouds. (Credit: Jeff Aquilina / University of Washington)

Sure, there are clouds pretty much everywhere that scientists can observe. But the ones hovering over the Southern Ocean are different — they are carrying somewhat more supercooled water than clouds in the northern hemisphere.

Clearly, this difference deserves some scientific attention, and researchers at the University of Washington are diving into the question through a project based out of Macquarie Island, a piece of land that lies about halfway between New Zealand and Antarctica.

Already known is that the vast Southern Ocean circling Antarctica soaks up a large portion of the carbon emissions taken up by the oceans and stores some of the extra heat trapped by the carbon emissions that remain in the air. Clouds play a key role, influencing the transfer of heat and light to the surface, but knowledge of these clouds’ properties and their impacts on the surface is hazy.

So the scientists are most interested in learning how cloud droplets, small bits of dust, sea spray, and other materials on which cloud droplets form, and the ocean and sun interact. By dissecting those dynamics, the hope is to improve the reliability of climate models in the long term.

They have started on a two-year project called the Macquarie Island Cloud and Radiation Experiment, or MICRE, to collect new data on clouds and precipitation in the southernmost seas. The instruments were installed on the island in late March, and are just now beginning to collect data.

Australia has operated a research station on Macquarie Island, located about halfway between New Zealand and Antarctica, since the early 1900s. The local population consists mainly of research staff and penguins. (Credit: Jeff Aquilina / University of Washington)

Researchers say there are very few land sites where they can take continuous measurements for two years, which is one of the features that makes the island an ideal place to use as a study site. Macquarie’s location also provides a benefit because it sits right where the scientists want to study, the remote Southern Ocean.

Instruments being used in the effort will measure variables such as surface precipitation, solar energy reaching the surface, heat radiated by the sky and surface, water vapor, cloud water and cloud base height. They will help to reveal properties of low-altitude clouds that appear in the region, including the amounts of supercooled liquid water that they hold.

The field experiment may reveal why low-cloud properties are different in the region. It will also provide new measurements of daily and seasonal changes that take place in cloud cover and help ground-truth measurements coming from satellites. That is something that has not been done much for the stormy, inhospitable Southern Ocean.

U. of Washington researchers hope that the project will become part of the larger Southern Ocean Cloud Rainfall and Aerosol Transport experiment, or SOCRATES, which could lead to more studies into the region’s clouds if it gets funded.

MICRE is an international collaboration between the U.S. Department of Energy, the Australian Bureau of Meteorology and the Australian Antarctic Division, which operates a research station on Macquarie Island.

Top image: Instruments, installed in late March, will record just how cloudy it is in the Southern Ocean, how much sunlight reaches the surface, and how much water is in the clouds. (Credit: Jeff Aquilina / University of Washington)