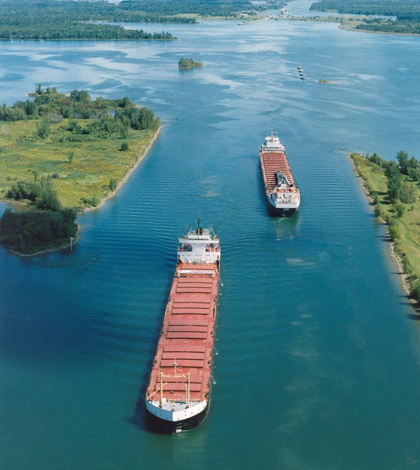 The St. Lawrence Seaway has been called the gateway to North America, and rightly so. It extends more than 2,300 miles from the Atlantic Ocean to the top of the Great Lakes. The seaway serves as a shipping route for commodities like iron, coal, grain and more as well as a recreational destination for boaters and fishermen.

But the St. Lawrence Seaway is more than just a highway for freighters. Because of its location, it is also an important ecosystem for studying changes that occur in the ocean as a result of climate change.

Recently, scientists at the University of Delaware have used the St. Lawrence Seaway as a location to study the issue of low-oxygen zones in the world’s oceans. These dead zones can’t support marine life like fish or crabs.

The researchers are very interested in a circulation shift that has taken place there, affecting how rich in oxygen the seaway is. For many years, oxygen-rich water coming down from Iceland fed the waterway. But now most of the water coming in is from the Atlantic Ocean and adds lower levels of oxygen to the seaway, creating bottom waters that are nearly hypoxic or less than 20 percent saturated.

To approach better understanding the problem, scientists are relying on the presence of soluble manganese-3. Manganese helps facilitate digestion in humans and is the key metal involved in forming oxygen during photosynthesis. It is also crucial to the growth and survival of marine organisms in aquatic environments. The trace nutrient is far more prevalent in the ocean than once thought, researchers say, noting that other works have found that manganese-3 can be the dominant form of the element in low-oxygen waters. Understanding how it reacts with organic molecules in the presence or absence of oxygen may help understand manganese availability to marine organisms.

In particular, scientists want to understand whether organisms present in the water are helping manganese transition between different states and what it means if they are. To get there, University of Delaware scientists spent two weeks in May 2016 taking water and sediment samples throughout the Lower St. Lawrence Estuary.

It is the largest estuary in the world and considered a model system for understanding how low-oxygen zones develop. Because its bottom waters are situated between hypoxic zones and others that are rich in oxygen, it’s also an ideal place to study manganese biogeochemistry and cycling.

During the trip, investigators measured manganese and iron throughout the water column and used sensors to measure oxygen, salinity, depth, pressure, temperature, turbidity and chlorophyll concentrations — which tell the researchers about plankton growth prior to the measurement. At the same time, microbiologists with the team cultivated for micro-organisms performing oxidation, hoping to reveal a connection between the manganese oxidation state and the biological content in the water.

Results of the work are not yet fully available. In the future, investigators plan to take similar measurements in the seasonally anoxic Chesapeake Bay and in Delaware’s Broadkill River, which is characterized by high surface-oxygen levels, high nutrient loads and high bacteria counts.

The amount of oxygen in any body of water varies seasonally and over time based on the amount of oxygen coming in from the atmosphere or mixing, scientists say. The chemical and biological processes going on are also important because they can consume oxygen held by the water. A goal moving forward for the work is to figure out which processes are more important in one location than another and why.