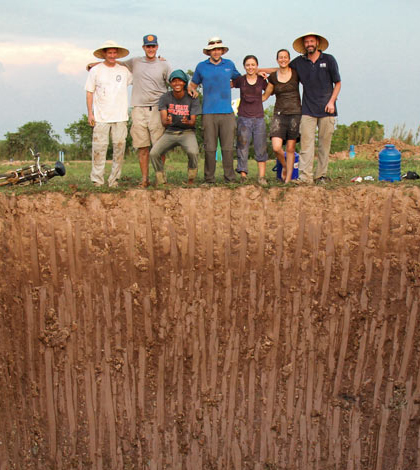 Earth system scientist Scott Fendorf (white shirt) poses with his team above a seasonal wetland that was dug out and flooded to simulate a permanent wetland environment. (Credit: Scott Fendorf / Stanford University)

Stanford University scientists have solved an important mystery about where the microbes responsible for releasing the dangerous arsenic levels into groundwater there get their food. The findings, published in the journal Nature Geosciences, could guide future land management and development in the region.

Arsenic is bound to iron oxide compounds in rocks from the Himalayas, and gets washed down the major rivers and deposited in the lowland basins and deltas. Scientists know that in the absence of oxygen, some bacteria living in those deposited sediments can use arsenic and iron oxide particles as an alternative means of respiration. But when they do this, the microbes separate the arsenic and iron oxides and transfer the toxins into underlying groundwater.

The mystery in this system is the source of energy that the microbes tap to fuel the separation process. The question that really limits researchers’ ability to come up with predictive models of groundwater arsenic concentrations is how and why the food that microbes use can vary across the landscape and with sediment depth, Stanford scientists say.

In the study, researchers at the university wanted to determine if the arsenic-releasing microbes were feeding on recent deposits of plant material located near the surface or whether they were tapping into older biomaterial buried deeper in the subsurface. A second question they wanted to answer related to the variation of arsenic release across the Asian landscape.

To address those questions, the scientists performed a series of field experiments. They collected sediment cores from two types of environments in the Mekong Delta in Cambodia: seasonal wetlands, where soil is saturated by rainwater for only part of the year, and permanent wetlands that are continually flooded.

Researchers say that they focused on wetlands because that is the dominant type of landscape found in Cambodia, Vietnam and other countries affected by arsenic contamination. One of the artificial pits made to simulate the permanent wetlands within the variable wetland site. (Credit: Scott Fendorf / Stanford University)

Mixing sediments collected from different depths in vials with artificial groundwater revealed that the oxygen-deprived bacteria living in the upper few feet of permanent wetlands were releasing arsenic. This differed from when water was mixed with sediments gathered from the same shallow layers of seasonal wetlands, which was found to be arsenic free.

The Stanford scientists hypothesized that bacteria residing in the shallow layers of seasonal wetlands were eating all of the digestible plant material during dry periods, when sediments are exposed to air and the microbes have access to oxygen. As a result, no food is left for the microbes when the floods returned, rendering them unable to take arsenic particles from iron oxides.

This suspicion was confirmed when the scientists added glucose – a carbon-rich and easily digestible sugar – to the seasonal wetland vial and the microbes began releasing arsenic. The arsenic-releasing bacteria living in the shallow regions of seasonal wetlands are reactive carbon limited, researchers say. That means that they don’t release arsenic into the water because there isn’t enough carbon available in a form they can use.

The same experiment was repeated with samples taken from about 100 feet underground, the depth of most drinking wells in Asia. It showed that bacteria living deep beneath permanent and seasonal wetlands are similarly limited and and do not release arsenic into groundwater under normal conditions. The careful search has identified the bacteria in permanent wetlands as the primary culprit of arsenic release.

The findings suggest that microbes in seasonal wetlands might not pose a significant threat for adding arsenic to groundwater. But researchers wanted to see what would happen if the conditions changed, such as when the land gets developed for other uses.

To answer that question, the team conducted a second type of experiment. In this one, they simulated the conversion of a small, remote seasonal wetland into a permanent one by digging out a seasonal wetland plot and keeping it permanently filled with water. As predicted, this resulted in the release of a small amount of arsenic.

The Stanford researchers say that their findings have large implications for projecting changes in arsenic concentrations with land development, as well as for the terrestrial carbon cycle, in Southeast Asia.