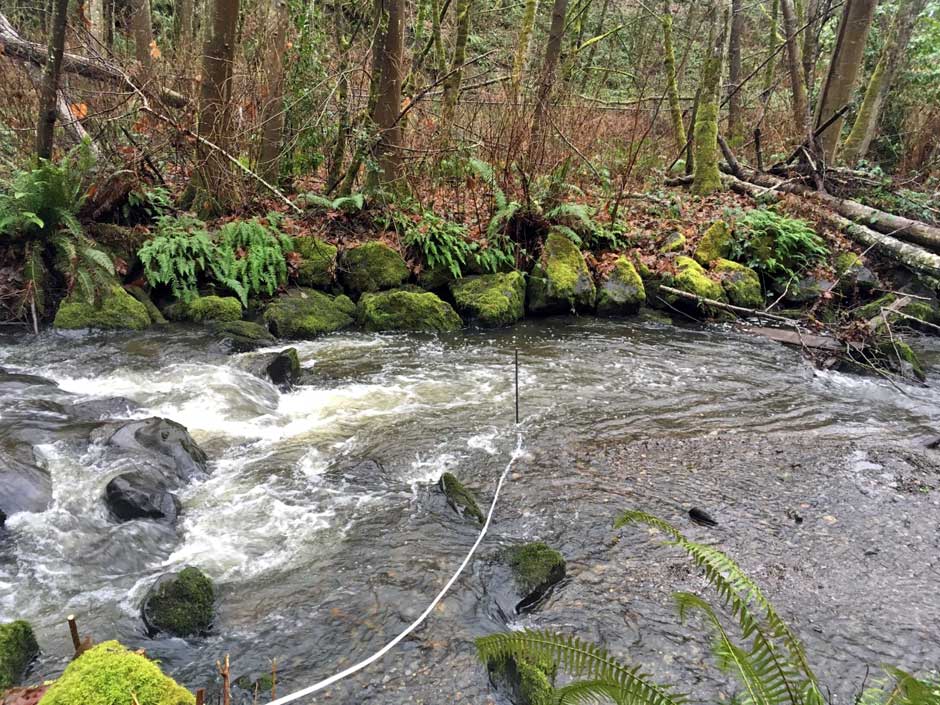 Each fall in Puget Sound, coho salmon leave the salt water and swim up freshwater streams. They head upstream to spawn: lay their eggs and die.

Death is always the end of this journey for coho salmon, but in streams now running through urban areas, stormwater runoff kills them before they can spawn.

This phenomenon, called Urban Runoff Mortality Syndrome, can kill up to 70-90% of coho salmon in an affected area.

“‘Woah’ is a pretty common response,” said Kathy Peter, a research scientist formerly at University of Washington Tacoma and the Center for Urban Waters.

This phenomenon adds pressure to the Puget Sound population, already considered a species of concern by the United States Fish and Wildlife Service under the Endangered Species Act.

In new research published in Environmental Science and Technology, Peter and a team of researchers show that the issue of runoff can be more complicated than previously thought.

A new pattern of pollution

In urban runoff studies, the general assumption is that the first flush carries the most pollution.

For many contaminants, like sediments and metals, most pollutants are carried off roads and other impermeable urban surfaces by the first rainfall from a storm. But, for emerging organic contaminants, like pharmaceuticals, pesticides and chemicals from tire tread wear particles, that’s not the case.

Concentrations of sediments and metals in runoff rise sharply at the beginning of a storm, and then taper off as the storm continues. With emerging organic contaminants, however, the high concentrations persist in streams beyond the first flush.

As streams fill up and stormwater moves contaminants from the surrounding watershed into the stream, concentrations of contaminants can fall below harmful levels if they are diluted by additional incoming stormwater. If emerging organic contaminants remain at elevated levels for longer, the period of exposure and potential risk to plants and animals lengthens.

But the study found new reasons to pay attention to the beginning of the storm, too. Even the earliest rain in a storm system moved large amounts of emerging organic contaminants.

“At the very beginning of the storm when it was just starting to drizzle, we were already seeing really high concentrations in the creek,” Peter said.

The rainstorms that cause urban runoff are also a signal to coho to begin their journey upstream to spawn. But, the rainstorms that swell streams to make them easier to travel also raise runoff contaminant concentrations to lethal levels.

“Urban stormwater is acutely toxic to coho salmon,” Peter said. “How it kills them is the million dollar question.” Click To Tweet

But kill them it does.

Coho affected by urban runoff mortality syndrome swim in circles, gape for air at the water’s surface and splay their fins out before dying, the Puget Sound Stormwater Science Team reports.

The Puget Sound Stormwater Science Team made up of researchers from Washington State University, the United States Fish and Wildlife Service and the National Oceanic and Atmospheric Administration predicts annual mean mortality of 10-40% for coho for much of Puget Sound and over 40% in some watersheds in and around Seattle and Tacoma.

Urban runoff mortality syndrome has been documented in coho along the Pacific coast from California to British Columbia, Canada.

Tires, an important source of microplastics and contaminants

As people travel by cars, tires wear down and leave behind little bits of themselves called tire tread wear particles.

Tire tread wear particles are already of interest as a source of microplastics, but they also release a chemical cocktail in streams.

The chemicals released by these particles are of particular importance because they could be central to understanding urban runoff mortality syndrome in coho.

Peter tested runoff-swollen streams for chemicals that come out of tire tread particles and found a period of high concentration in streams during storms that extended beyond first flush.

Because cars are ubiquitous in urban settings, tire wear particles might be a “semi-infinite” source of contamination to urban runoff, the study says.

Beyond the fact that researchers aren’t entirely sure how urban runoff kills coho, there is some uncertainty about where all the contaminants in runoff come from.

Some researchers put forward a mud puddle hypothesis, which suggests there are reservoirs of certain contaminants throughout the environment: in lawns and urban sediments, or even in stormwater conveyance systems. Runoff from these sources adds to what already comes from roads, elevating overall levels and offering new opportunities for mitigating contamination before it enters streams.

Until effective mitigation measures are in place, storms that draw salmon into streams from Puget Sound will continue to flush deadly contaminants at persistent, elevated levels toward those incoming coho.