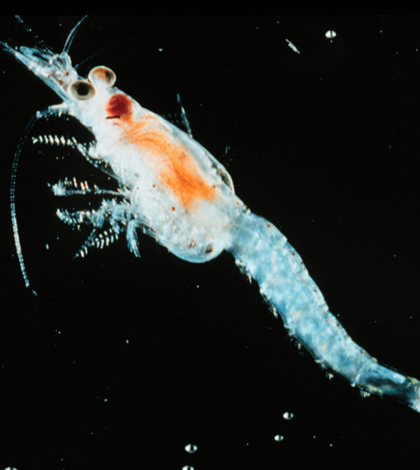 An inch-long crustacean spends its days near the bottom of Lake Superior, then swims up hundreds of meters under the cover of darkness to feast on plankton growing near the surface.

That daily migration of the shrimp-like Mysis diluviana is an important interaction between two nutritional pathways in Lake Superior — one based on lake-bottom sediments and another on plankton growing in the water column.

It’s one strand in the system-wide food web that links the seemingly separate worlds of the nearshore and offshore habitats in the largest freshwater lake by area on the planet.

A recently published study describing these food web links in Lake Superior is one of the first to show cross-habitat interactions in a such a large lake.

“This is actually pretty significant step forward,” said Michael Sierszen, a research ecologist with the U.S. Environmental Protection Agency and lead author of the study. Interactions between offshore and nearshore habitats have been recognized in smaller lakes where there isn’t much distance between the two. “Our understanding of the ways that habitats in large lakes interact is just developing now.”

Scientists have known about what Sierszen called “structural differences” in large lakes, where some species of fish and invertebrates make their home in shallow, nearshore habitats and others live in the deep, offshore regions.

But what has been less clear is whether the ecosystems in the two depth-based habitats function differently. For example, does the deep system rely on different sources of energy than nearshore systems? And to what extent do the two habitats operate independently or interact?

To answer those questions, the researchers collected samples of plankton, invertebrates and 11 fish species from across Lake Superior. They identified chemical signatures associated with the lake’s various habitats and performed stable isotope analyses to detect those signatures in the tissues of the lake organisms.

The study did reveal differences in how energy flows through deep and shallow habitats: Nearshore food webs are built on the benthos, where detritus in the sediment fuels the growth of small invertebrates that are in turn preyed upon by fish. In offshore habitats, where the benthos are more barren, the base of the food web is plankton growing higher up in the water column.

Despite those differences, the analysis also showed connections between the shallow and deepwater worlds. Most of the species carried chemical signatures of both offshore and nearshore benthic habitats, regardless of the depth of their preferred habitat.

That means even some individuals of the fish species that generally prefer very deep water sometimes venture into nearshore habitats to eat, just as the nearshore species sometimes eat in deepwater. The USGS research vessel Kiyi, named after a fish in the study, collected many of the fish samples used in the analysis. (Credit: USACE)

The link between benthic and planktonic food webs is mostly formed by the vertical migrations of offshore species such as the mysis and kiyi, a native, foot-long fish that follows the shrimp to the surface and feeds on them. That follows a pattern seen in other large lakes around planet, Sierszen said.

“It turns out that in great lakes all around the world, there are invertebrate and fish species that have evolved independently to migrate and link the benthic and  planktonic habitats,” he said. For example, in Russia’s Lake Baikal, the largest freshwater lake by volume, the amphipod Macrohectopus branickii performs a similar migratory role as the mysis.

The research began as an effort to define different ecological habitats in large systems like the great lakes to help improve effectiveness of monitoring designs, Sierszen said. Given the importance of the species that link habitats through vertical migration, he said that it makes sense to track the populations that perform that function.

From a management perspective, it also bolsters the case for protecting and restoration native species, as those are often the groups that have evolved the behaviors to move between habitats and nutritional pathways.

The study is published online ahead of print in the journal Freshwater Science.