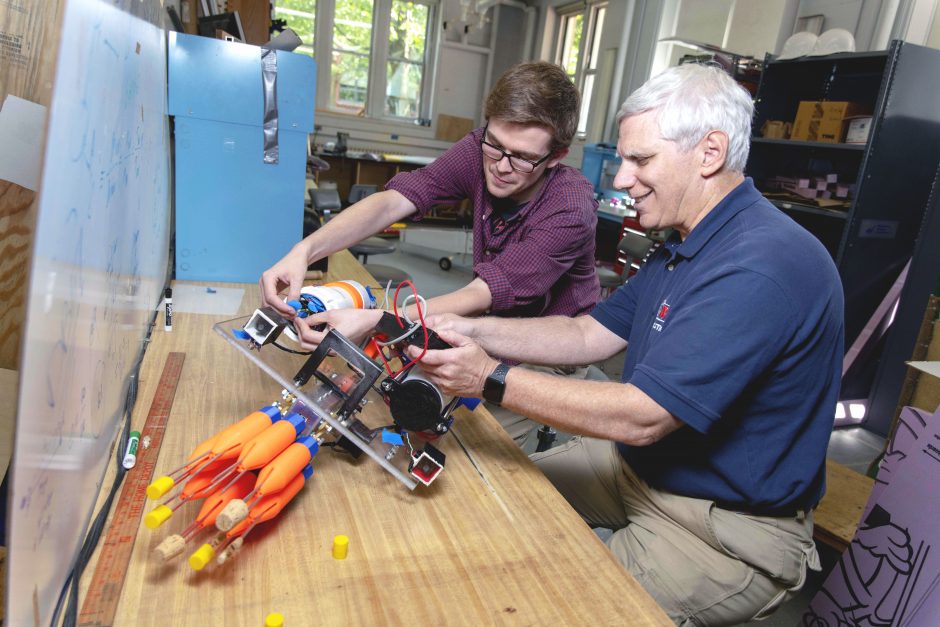 In Caribbean waters and into the coastal areas off Florida and Georgia in the United States, an exotic-looking invader is threatening local ecosystems: the lionfish. Unfortunately, lacking natural predators and being dangerous to fish thanks to its painful poisonous spines, lionfish aren’t easy to manage. Now, undergraduate students at Worcester Polytechnic Institute (WPI) have designed and prototyped an underwater robot that might be able to tackle this invasive species and help local fishermen make a profit, too, as much as $20 per pound.

“This project was conceived a few years ago when Professor Craig Putnam, an avid diver, started to see the increasing population of lionfish and the decline of many other fish species,” explains Ms. Conroy. “After talking with locals and others concerned about the situation, Professor Putnam saw this as the perfect opportunity to make a difference with robotics.”

As part of an ongoing effort, teams of WPI students have been hoping to reduce the lionfish threat which endangers the health of both coral reefs and various species of fish that are recreationally and commercially important.

Teach a robot to fish 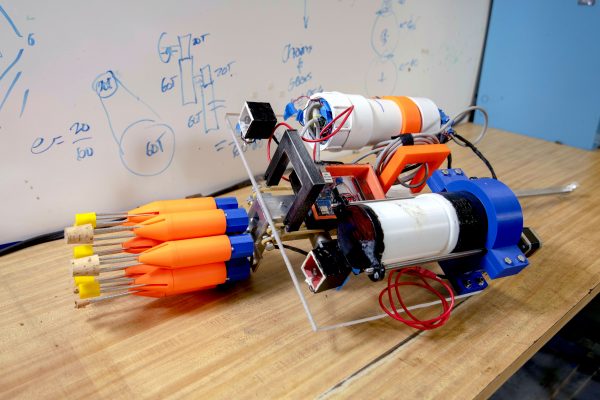 This view of the robot shows the eight orange spear tips mounted on the blue carousel, two small boxes just behind the carousel containing cameras, the electronics chamber behind the right camera, and the buoyancy chamber behind the left camera. (Credit: Worcester Polytechnic Institute)

“The particular software used for the classification system is called TensorFlow™,” Mr. Antaya describes. “The system was ‘trained’ by showing the cameras hundreds of images of lionfish. These were of various subspecies of the fish (a couple of different species are found in the Caribbean), in various sizes, from different angles, et cetera.”

The TensorFlow™ software was originally running on a Raspberry Pi computer, and although that worked, it was too slow to be useful.

“It was taking 4 to 5 seconds to correctly identify a lionfish,” remarks Mr. Antaya. “The team found a product from Intel called a Movidius™ Neural Compute Stick that acts as a hardware accelerator for this kind of application.”

With the new accelerator, the robot was able to make decisions more quickly.

“The system was ‘trained’ by showing the cameras hundreds of images of various subspecies of the fish as a couple different species are found in the Caribbean, in various sizes, from different angles, et cetera,” comments Mr. Antaya. “This works exceptionally due in part because of the unique ‘look’ of the lionfish. With all of the venomous spines protruding from its body, the lionfish is particularly easy to distinguish from other fish in the Caribbean.”

A species like this that is a predator—and which has no predators itself outside its natural habitat—is particularly harmful to the local ecosystem.

“And to add to this problem, lionfish are eating many of the fish that clean and maintain the reef, which puts extra stress on it,” states Ms. Conroy. “NOAA has determined that without intervention the lionfish population will continue to expand and have detrimental effects on the reef.”

Ultimately the robot is designed to be deployed by people while fishing.

“The goal of the project is to see this system be used by fishermen so that the fish can be harvested and sold to local restaurants,” adds Mr. Antaya. “The conceptual operation would have a fisher navigate to an area where lionfish are known to be; from here they would be able to just throw the system overboard. At this point, the system would take over and autonomously navigate to the seafloor and start looking for lionfish.” 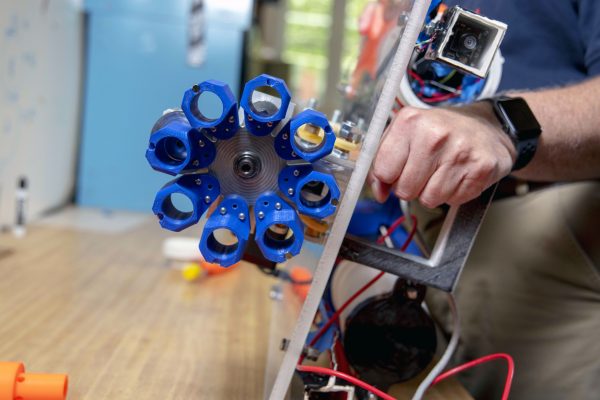 A close-up of the carousel that moves the spear tips into position to be thrust into lionfish by a metal shaft. One of the robot’s cameras can be seen in the small watertight box at left. (Credit: Worcester Polytechnic Institute)

The preliminary design of the robot’s autonomous navigation system and its abilities to plot its course once it is thrown into the water or set up a search pattern and avoid the reef are not yet in process. Although commercial robots that might hunt lionfish exist, they all require an operator to be tethered to the robot, a demand which can damage the delicate structure of coral reefs. The team’s robot, being autonomous, eliminates these issues.

“The Lionfish harvester mechanism includes an innovative Geneva mechanism that allows it to actuate each spear tip into place,” clarifies Ms. Conroy. After dispensing each positively buoyant spear tip, the mechanism turns until a driven wheel catches. From there, the driven wheel moves into the correct position to shoot another spear tip.

After placing the buoyant spears in its prey and retracting the shafts, the robot compensates for any lost buoyancy from its spent spear tips by enlarging its built-in, watertight chamber, using air to balance out lost buoyancy.

For now, the team is busy ensuring that the robot doesn’t make classification mistakes. With the help of its training on many images, it can now identify its prey much more quickly—and users can feel secure about its judgment.

The classification was now possible in something like 100 milliseconds—a speed sufficient to generate steering commands for an ROV platform. “Note that the classification system was also trained on what the robot is not to aim at—specifically divers!” adds Mr. Antaya.