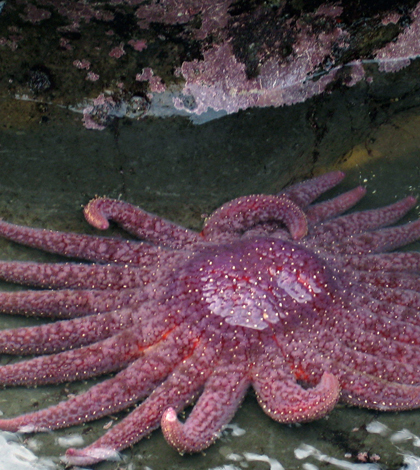 After a devastating die-off of sea stars three years ago that stretched from the coasts of Alaska all the way down to waters off Baja, California, marine biologists began searching for the cause. Most agreed that sea star wasting disease was to blame, but there is still little knowledge of the virus behind the disease and which of its quirks led to such quick deaths for so many sea stars.

In response to the mass die-off, an investigation completed in part by a group of students at the University of Washington in the summer of 2014 may answer some questions. The results of their work, recently published in the open-access scientific journal PLOS ONE, detail findings that they say can serve as the basis for a larger discovery on sea star wasting disease.

Over a course of 5 weeks, the researchers sampled sea stars from four different locations throughout the coastline of Washington State. From there, they looked at how different genes expressed themselves in healthy sea stars, as well as diseased ones when exposed to the pathogen that causes sea star wasting disease.

“Doing this study isn’t going to save the sea stars, but from an ecological perspective, it provides new information,” said Steven Roberts, an associate professor of aquatic and fishery sciences at the University of Washington and one of the instructors of the course, in a statement. “This could be a building block for future studies on the evolution of immune repertoires.” Some of the questions that the data could one day help answer include how the sea stars attempt to fight the virus, why they develop lesions when they’re infected and why they appear to “melt” when they die from it.

To gather the findings, researchers took the sea stars they collected back to the lab. These were gathered as closely in size as possible so that individual sea star mass didn’t affect results. The stars were first inspected for disease or trauma and then put into individual aquariums where they were allowed to acclimate, over a period of a couple days to months depending on where they’d been scooped up.

After acclimating to their new surroundings, the students ground up tube feet, dermal tissue and body fluids from sea stars already infected by sea star wasting disease. In one set of solutions, they left some of the virus’ cells viable. In another, they made sure the cells were all killed with heat using a boiling treatment. The solutions were injected into two groups of sea stars and then researchers watched to see how they responded. “Animals were checked twice daily and any physical or behavioral changes recorded,” authors write in the study. “All animals were sacrificed 9 days post-injection once all three treatment animals showed small lesions, the first visible signs of SSWD.” As for the control group, which received the sterilized injection, they showed no symptoms of the disease.

In addition to those efforts, researchers also analyzed the inner fluids of dying sea stars and sequenced some 30,000 genes of both healthy and sick sea stars.

They found that sick sea stars expressed genes differently than healthy ones and there was strong evidence of immune response at the genetic level among infected sea stars. Researchers also found that some genes involved in the nervous system and tissue-building express themselves differently in sick and healthy sea stars. That knowledge could help scientists better understand how the disease wreaks havoc on the animals’ bodies.

“This gives us a bit of insight into what’s going on,” said Roberts in the statement. “One could argue that, in the long term, this information could be used to build upon.”

Eight students share lead authorship of the paper and hail from institutions including University of California – Santa Cruz, Penn State University and the University of Texas, among others. The study was funded by the National Science Foundation’s Ecology of Infectious Marine Diseases Research Coordination Network Workshop.

Top image: A healthy sunflower star, Pycnopodia helianthoides. This species was used in the recent study. (Credit: Eric Chan/CC BY 2.0)