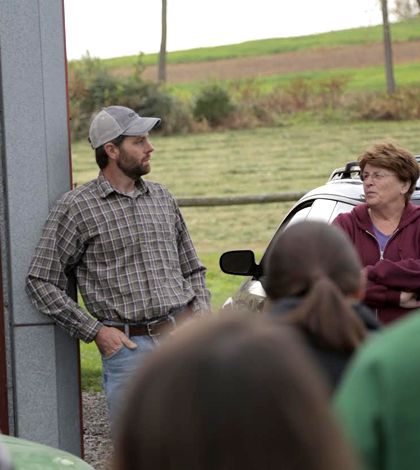 For some time, the Chesapeake Bay has been troubled by a dead zone each year, typically coming about in the summer months. This low-oxygen region of the bay makes for poor, if not impossible, living conditions for aquatic life.

A large reason for the dead zone, as in other prominent ones like the annual Gulf of Mexico dead zone, is runoff that gets washed off surrounding farms and transported down tributaries to concentrate in the bay. But concerned environmental groups, like the Chesapeake Bay Conservancy, are aware of the problem and have begun working on some efforts that can help alleviate it.

In one example, officials at the conservancy have recently partnered with experts at Bucknell University to train students there how to use remotely-sensed data within a GIS (geographic information system) to identify important runoff flow paths on farms along Buffalo Creek, a tributary of the Susquehanna River that links to the bay downstream.

The idea was pretty simple: Train the students to use the data and then let them go out and talk to farmers in the region to see which of their ideas might actually work in the real world. From there, the students would put together suggestions on treatments that could reduce runoff and present some of their thoughts to the farmers. Actually implementing the proposals would be left up to those who owned the land.

The approach is an example of precision conservation, a methodology gaining popularity these days that aims to reduce nutrient pollution by pinpointing the farms with the most runoff and then finding, and addressing, the source on each one.

To do that for the farms that they were looking at, Bucknell students were trained to use the methodology developed by staff at the Chesapeake Conservancy to look for the flow paths of runoff. These are influenced by the combination of elevation and land cover. “I’m not a hydrologist, but my understanding of it is that mapping the unweighted flow paths gives us a profile of where higher volume runoff is occurring,” said Janine Glathar, GIS specialist at Bucknell. “Mapping weighted flow paths adds in information on how land cover types differ in the type of pollutants they introduce into runoff.”

For the Mennonite farms along Buffalo Creek, the pollutants were mostly linked with the application of fertilizers used to support growing crops. It was the students’ task to figure out where they were coming from and then come up with ideas for treatment.

The area along Buffalo Creek was chosen because of its close proximity to Bucknell’s campus, as well as its history in research projects carried out by the university’s faculty.

“It’s large enough that there’d be enough sites to look at but small enough that calculations wouldn’t take forever,” said Richard Crago, professor of civil and environmental engineering at the university. He designed the class project that used the GIS dataset. “We really didn’t use any equipment. We had already produced maps of the flow paths and the normalized difference flow index (NDFI, a measure coined by the Chesapeake Conservancy). Our students had identified spots for restoration projects, and our intention was to visit as many sites as possible.”

The class, which ran through the fall of 2015, was able to go to quite a few sites, with students commonly finding that the flow paths they had predicted were right where they thought they’d be.

“We did find on our field trip with students that the flow paths identified by students correlated very clearly with the farmers’ accounts of what was happening on their land,” said Glathar. “Professor Crago is planning a summer 2016 student research project that will focus on ground truthing – including evaluating how well the weighting scheme for land cover types does at predicting the actual water quality in different areas.” The accuracy was useful in assigning possible treatments that could help to mitigate the runoff. Some of those that students recommended included stormwater wetlands, stormwater ponds or grass swales, all of which are well known in stormwater treatment.

“One student paper said, ‘We thought about suggesting a larger pond, but thought that the farmer wouldn’t implement it,’” said Crago. “So the students had to take into account social and cultural implications.”

Crago says he has forwarded a few of the students’ ideas to folks at the Buffalo Creek Watershed Alliance, a group looking at activities in the watershed, such as land development, that could affect water quality.

But the actual implementation of those treatments is up to the farmers. The bulk of the work for students was to simply come up with a treatment design and then present it to farmers for consideration.

“They (farmers) really wanted to talk to the students and they were very eloquent about how deeply they care about the health of their farms and streams,” said Crago.

The two groups were pretty different as they came together, Crago says. But both farmers and students benefited — farmers from receiving the treatment suggestions and students because they had to consider the needs the farmers had.

“I think there were several strands that pulled together very nicely. We got the students using GIS on a very compelling project. The precision conservation idea made routine GIS much more relatable and exciting,” said Crago. “And students were able to come up with engineering designs for farmers who were very different from Bucknell students. They had to step into the feet of the farmers who may not want to turn their whole field into a wetland (for example).”