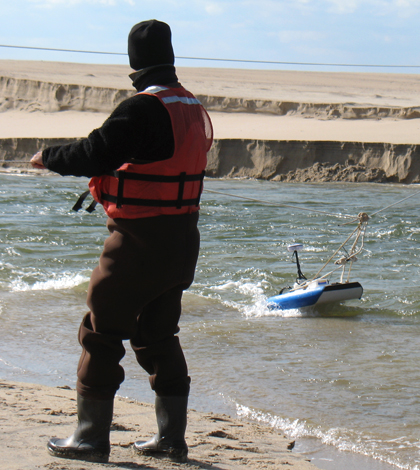 Martha’s Vineyard has for years been a quiet New England escape for the rich and famous. However, paradise was lost for a few years during World War II when the Navy leased some areas of the island for practice bombing sites. These sites included the Tisbury Great Pond, a 500-acre coastal pond fronted by a barrier beach. Since the bombs quieted and the Navy lease expired, residents enjoy the area for its beauty and for the salty pond’s shellfish harvests.

Since the early 1900s, Tisbury Great Pond residents have periodically drained the pond for flood prevention and to replenish salinity that rainfall dilutes. Excavating a channel across the barrier beach to allow ocean tides to flush the pond. The freshly-dug inlet is usually active for one week before naturally closing, but before that the pond’s surface falls 3 to 4 feet and salinity rises above ambient conditions.

Though the inlet channel itself is relatively harmless, the chance that its dynamic currents could pick up the historical unexploded ordnance left behind from the practice bombing presented a potential risk to the public. The Army Corps of Engineers and their subcontractors surveyed the site to identify the locations of any remaining ordnance and an evaluation of the potential for littoral processes to move the ordnance around.

The high current velocities and resulting beach scour that occurs immediately following a channel excavation event (typically lasting two tidal cycles) introduces a potential pathway for exposure of transport of the unexploded ordnance. Woods Hole Group, Inc., one of the subcontractors, was asked to model the hydrodynamics of the artificial inlet in an effort to understand how the opening, closing and migration of the man-made excavation might influence munitions transport.

Woods Hole Group designed the model to simulate water levels and current velocities as a result of drainage from the pond and subsequent tidal currents. To support the model development, Woods Hole Group completed a review of all historical water level information available for Tisbury Great Pond, assessed additional data collection needs, and mobilized a field team to collect any missing data. The RiverSurveyor was used to collect cross-sectional profiles of the inlet as well as velocity data. (Credit: David Walsh)

“We used the RiverSurveyor M9 because of its unique capability to profile currents in very shallow water over a moving bottom,” said Woods Hole Group coastal scientist David Walsh.

As it was measuring currents, the RiverSurveyor collected cross-sectional profiles of the evolving inlet so the research team could track the changes in the shape of the channel as water flowed. Using a large, 200-foot clothesline tether system, they pulled the RiverSurveyor back and forth across the channel. Because the bottom was changing and the water was flowing so swiftly (Walsh estimated it at nearly 10 feet per second at times), they could not use the bottom of the channel as a reference point for water velocity and movement.

With the use of the RiverSurveyor’s real-time kinematic GPS, satellite navigation provided approximately 3-centimeter accuracy for positioning, which served as the water velocity reference.

“That was key,” Walsh said. “Otherwise we would not be able to get accurate data.”

The velocity data from the RiverSurveyor, as well as concurrently collected water level data in the pond and offshore, was used to create a model of the inlet evolution and the areas susceptible to transport by the flowing water. The model results will assist with the ongoing remediation of remaining unexploded ordnance, ultimately making Tisbury Great Pond a little safer for residents.