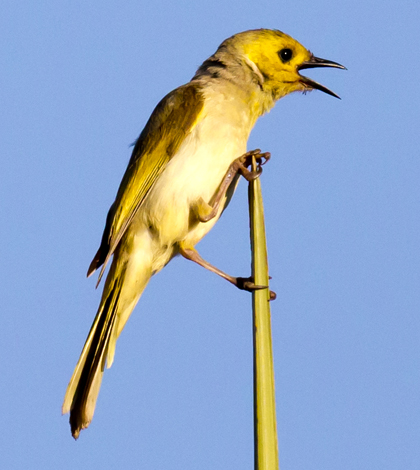 When a walk in the woods or along the water scares a bird into flight, the distance the bird covers after being spooked is used by conservation biologists to help define setbacks and buffers around refuges and preserves. A new study of Australian wetland birds wetlands suggests people gliding up in canoes aren’t as threatening as folks on foot.

The researchers approached birds on river in Northwest Queensland in canoes and while walking. Birds flushed by walkers flew around 50 feet farther than those spooked by canoes.

Most research into so-called “flight initiation distances” has focused on how birds respond to a human approaching on foot, according to the study. The studies that have looked at the effects of watercraft have found approaching boats to cause certain species to abandon habitats, become more vulnerable to predation and otherwise alter the way they spend their time.

For this study, published in the journal Wetlands Ecology and Management, the researchers approached a variety of duck, grebe, egret, ibis and other bird species in wetlands along the the Darr and Thompson rivers until the birds fled. Using a laser rangefinder, they recorded how far away they were from the birds when they took off, known as the starting distance, and how far the birds flew. The Australian darters in the study flew farther from canoes than walkers, breaking from the trend. (Credit: bert knottenbeld/CC BY-SA 2.0)

Those two species aside, the trend makes sense. The distance of escape flights cane influenced by the speed, noise and shape of the intruder, according to the study. “Most (unmotorised) canoes are slow, quiet, used by non-consumptive recreationists (some are used by hunters), and presumably represent little risk to birds,” the authors write.

If wildlife managers were to use data gathered in this study as a guideline to restrict access and protect the birds, the study would recommend a set-back distance of around 300 feet. But that is “wider than most waterbodies in the study area,” according to the study area, suggesting that some disturbance from boats may be inevitable.