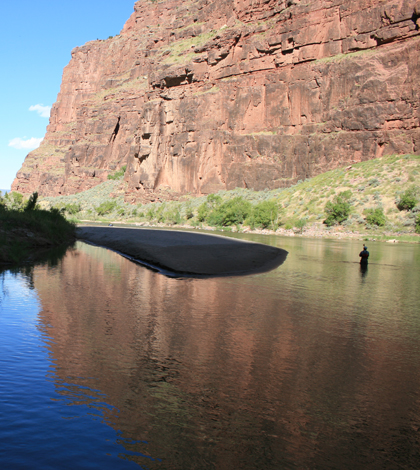 The Green River where it flows through the Canyon of Lodore in Dinosaur National Monument (Credit: Ted Melis/USGS)

In spring of 2011, operators of the Flaming Gorge Dam on the Green River in Utah had to free up space in their reservoir to make room for runoff from the record snowpack that had built up in the surrounding mountains over the winter.

The result was the third-largest flow from the dam since it was built in the early 1960s. For around a month, the river roared downstream through Dinosaur National Monument at a level nearly twice that of its average peak flow under normal conditions.

The Flaming Gorge Dam has altered flows and sediment movement on the Green River, corralling floods, narrowing the channel and trapping sand in the reservoir. Resource managers at Dinosaur National Monument were curious about the effects of higher flows on riparian habitat and channel width. A collaboration scientists from the U.S. Geological Survey, Utah State University and Northern Arizona University surveyed the river after the 2011 flood and documented the changes. The results were recently published by the USGS.

The study also offers a comparison to what researchers have learned in the Grand Canyon, where there Glen Canyon Dam has tamed the Colorado River’s historical floods and blocked its upstream sediment supply. Wildlife and water agencies there have experimented with higher flows that mimic the timing of natural floods.

“Some of the motivation to do this study was based on what we’ve learned in Grand Canyon,” said Erich Mueller, lead author of the Green River study and research hydrologist with the USGS Grand Canyon Monitoring and Research Center. “And so we used this semi-natural flood as a sort of experiment to see what happened in a different but similar type of river system.”

In September 2011, crews conducted surveys of the river, where it flows through the Canyon of Lodore in Dinosaur National Monument. With raft-mounted sonar and other land survey methods, They collected around 10,000 ground survey points and 20,000 bathymetric survey points over the course of five days. Analysis of digital elevation models created with that data shows that sediment was scoured from the bed in some places and deposited in others. In some locations, as much as 5 meters of sand were eroded from the river bottom. Sandbars were also created throughout the stretch of river.

One effect that managers were particularly interested in is whether the flood would widen the channel, which has narrowed by 20 percent within the Canyon of Lodore since Flaming Gorge was built. The dam reduced peak flows, which allowed vegetation like non-native tamarisk to encroach on banks and sandbars that were no longer inundated by occasional floods.

But the surveys showed that the channel width was relatively unchanged and the tamarisk relatively undamaged despite more than a month of flows in the neighborhood of 9,000 cubic feet per second–around twice the dam’s standard peak flow of 4,600 cubic feet per second. The main effect of the flood was not to expand the channel to something closer to the pre-dam system, but mostly to rework the material in the current active portion of the channel.

One reason the flood’s effects on channel width weren’t more dramatic is that while these flows were the third highest in the river since the dam was built, they wouldn’t amount to much on a longer time scale.

“This was a big flow, but it was still less than the typical pre-dam, two-year flood,” Mueller said. “It would have been a small flood in the pre-dam system.”

Top image: Topographic surveying work in the Green River where it flows through the Canyon of Lodore in Dinosaur National Monument (Credit: Ted Melis/USGS)