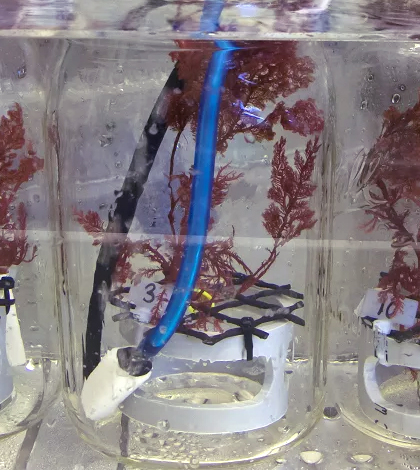 As atmospheric carbon levels increase, more and more carbon is absorbed into the world’s oceans, making waters increasingly warm and acidic. Apart from a handful of region- and species-specific studies, relatively little literature exists on the potential impacts of ocean acidification, but the scientific community seems to agree on one thing: Ocean acidification is going to change marine ecosystems in ways that could have far-reaching consequences. A new study from researchers at the University of California, San Diego, furthers this body of knowledge by examining the effects of acidifying waters on six different seaweeds local to San Diego.

“Temperate macroalgae are ecosystem engineers, providing habitat, refugia and energy as a food source to countless organisms in coastal habitats,” said Susan Kram, staff research associate at UC San Diego’s Scripps Institution of Oceanography and lead author of the paper. “Understanding how they will be affected by ocean acidification will help inform what our coastal habitats will look like in the future.”

Macroalgae is the scientific term for the large-celled plants that the layperson knows as “seaweeds.” The new study looked at both calcified and noncalcified — skeletal and fleshy — species of macroalgae to learn how each type responds to acidification.

Going into the study, Kram said that she expected calcified macroalgae to be negatively impacted by ocean acidification, as acidic conditions make it more difficult for their carbonate skeletons to develop. She noted that this effect isn’t limited to seaweeds — any hard-shelled organism, from corals to clams to abalone, would be hindered. On the other hand, fleshy seaweeds could actually benefit from acidifying oceans, due to the way they uptake carbon dioxide during photosynthesis, but Kram pointed out that the mechanisms behind this process aren’t fully understood.

To conduct the study, Kram and her team collected specimens representing each species from intertidal and shallow subtidal zones.

“Each experiment took an enormous amount of dedication and time, and usually included a team of eight to10 researchers and volunteers,” Kram said.

After collection, the specimens were taken back to Scripps’ Smith Lab, where they were placed in glass beakers with access to the lab’s continuous flow-through seawater, and heated to mimic projected marine conditions in 2100. The beakers were also supplied with specially mixed air simulating current or futuristic carbon dioxide concentrations.

Maintaining the precise air and water treatments proved somewhat of a challenge, Kram admitted, but not one that was insurmountable.

“Luckily, we have many resources, wonderful collaborators and a strong network of devoted researchers to make otherwise overwhelming tasks possible,” she said.

The researchers’ observations coaligned with the expectations set by existing literature: Calcified organisms respond more negatively to ocean acidification than fleshy ones, though the new research showed that the degree to which they respond is species-specific.

“Based on our findings, we expect calcified algae to grow more slowly in the future, while fleshy algae will sustain current or increased growth rates,” Kram said. “This may mean that fleshy algae are more competitively dominant over calcified algae while competing for common resources, such as space.”

Kram and her team plan to continue this research by looking at the impact of rising carbon dioxide levels on abalone larvae and the calcified algae that they settle on. They’ll also examine how carbon dioxide alters marine community structure and “interactions between fleshy seaweeds and economically important bivalves, such as oysters.”

“All living things are connected, so we know the effects we see on seaweeds will in turn affect other organisms, but those relationships aren’t yet clear,” Kram said. “More information is still needed on the responses of species to more gradual carbon dioxide increases to allow for acclimatization or adaptation, as well as species-interaction and community level experiments.”