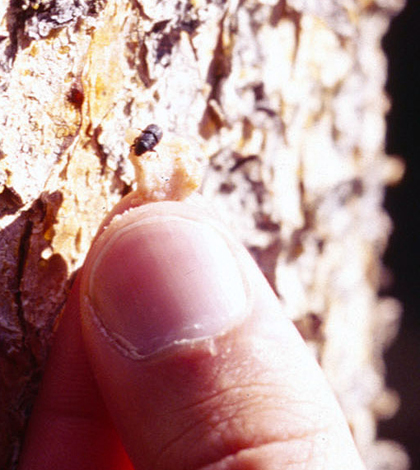 Naturally occurring pine beetle outbreaks have ravaged forests in Colorado for decades, rapidly clearing tall trees and canopy vegetation for miles. The tiny insects pose a challenge to forest ecosystems there and in other parts of the West.

Scientists have long hypothesized that the loss of those taller trees would lead to higher nitrate levels in streams, as trees take up the agricultural compound as food. But new research indicates the beetle outbreaks are actually good for streams’ fight against nitrate pollution.

“We found the beetles don’t disturb watersheds in the same way as logging and severe storms,” said William Lewis, study co-author and interim director of the University of Colorado’s Cooperative Institute for Research in Environmental Sciences. “They leave behind smaller trees and other understory vegetation that compensate for the loss of larger pine trees by taking up more nitrate from the system.”

Lewis and 10 other researchers compared the effects of pine beetle outbreaks with those sustained by streams after logging. They found that nitrate levels in streams near pine beetle outbreaks didn’t go up following the fall of large trees, while nitrate levels in streams near logging sites went up by about 400 percent and retained those levels for years.

“We see that logging removes the canopy trees, but it also damages the small vegetation,” said Lewis. “That blunts the effect little trees have on nitrate uptake.” Using modeling software, the researchers analyzed stream samples from multiple locations collected over many years for comparison. Each sample was filtered and put through an ion chromatograph, a machine that removes nitrate from water.

“We looked at one stream in the Fraser Experimental Forest and more than 100 streams elsewhere,” said Lewis. “A lot of the studies took place in higher elevations. We took a before-and-after look at beetle kills and compared that to logging.”

They found that the small trees provide potent water quality protection against the adverse effects of nitrates.

The study was a group effort, with contributors from Colorado State University, the U.S. Forest Service, the U.S. Geological Survey and the Cary Institute of Ecosystem Studies.

“This was a series of related studies that came together. They started out separately, but we decided to collaborate,” said Lewis. “We knew that forestry and water managers were expecting big changes in water quality as a result of the pine beetle outbreak, so we decided to pool our resources to come up with an answer.”

When looking at nitrate levels after beetle outbreaks, the answer was a surprising one.

“We didn’t see any effect. There was a near zero increase. The fact that it didn’t increase was quite shocking,” said Lewis. “It shows that a forest ecosystem has a certain kind of resilience. When it’s changed in a large way, the forest compensates.”

Top image: A pine beetle that had been expelled from a tree by the pitch (Credit: James H. McCutchan, Jr)