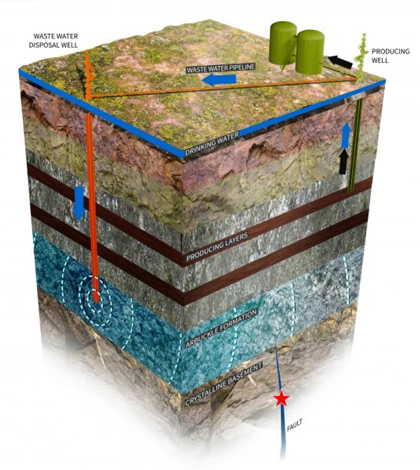 More earthquakes than usual have been hitting Oklahoma lately. While researchers say those quakes would have happened anyway, oil production practices are making them happen much sooner than usual, according to a release from Stanford University’s School of Earth, Energy & Environmental Sciences.

Wastewater from oil production injected into the Arbuckle Formation has been causing pore pressure increases in its rocks, resulting in more frequent earthquake disturbances. The Arbuckle Formation lies 7,000 feet underneath Oklahoma and essentially acts as a sedimentary disposal system for oil producers, who inject it with saline wastewater.

Scientists used studies of three Oklahoma sites where earthquakes were on the rise and compared them to sites where the number of earthquakes had not increased significantly. They found a correlation between the injection of oil production wastewater into the Arbuckle Formation with an increase in quakes, whereas the sites without wastewater injection did not see earthquake increases.

Researchers were pleased to have found the reason behind the increase in quakes. However, oil producers have already injected so much wastewater that even if no more wastewater is forced into the Arbuckle, it would take time before earthquakes became less frequent.