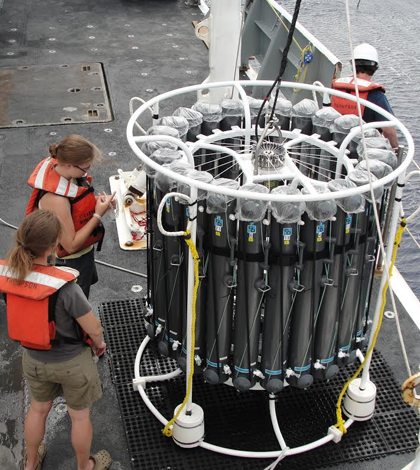 Considering iron’s chemical properties, scientists had long surmised that it transformed into particles, attached to other things and sunk to the bottom of the ocean after getting flung out of seafloor vents along the Pacific Ocean’s East Pacific Rise. But a new study finds that this is not the case, uncovering implications for models of ocean cycles and the global climate.

Researchers at the University of Washington made the find after deploying a specially designed CTD (conductivity, temperature, depth) rosette off the stern of the research vessel Thomas G. Thompson. Working with scientists from Old Dominion University, Woods Hole Oceanographic Institution, University of Southern California and the University of Liverpool, they collected water samples of water that rose up from the ocean floor at the East Pacific Rise. Using the tracer Helium-3 as a comparison element, they pinpointed the behavior of iron as it moved away from the rise in a way that has not been done before.

The rosette had 24 sampling bottles on it, each capable of collecting 10 liters of seawater. It was also equipped with a Seabird CTD instrument package. The whole thing was lowered repeatedly into the ocean over a period of 57 days in fall 2013 that saw the scientists tracking water venting across the East Pacific Rise.

To look at iron specifically, researchers had to deal with the fact that its levels can be easily contaminated. That is something that has been an issue in studies past.

“The wires we put down for ships were metal, but now we use plastic-coated kevlar cables,” said Joseph Resing, senior research scientist at the University of Washington and the National Oceanic and Atmospheric Administration’s Pacific Marine Environmental Laboratory. “We do everything we can to avoid contamination and introduce as little iron as possible.”

After the CTD made its trips to the bottom of the ocean, scientists processed the samples it collected using a technique called flow-injection analysis. It involves injecting samples into a moving stream. From there, they measured the concentrations of different elements in the samples using spectrophotometers and fluorometers.

Aluminum mixed with a reagent to make a fluorescent compound that the scientists could track, while iron and manganese reacted to make colored compounds. But the tracer Helium-3 had to be analyzed by mass spectrometry after the ship had returned to shore. As an inert isotope of helium, its levels in the samples didn’t change except by dilution.

“Going back 30 years, we have measurements of Helium-3. We can see it escapes to the surface in the Southern Ocean and gets out of the ocean through mixing,” said Resing. “The Helium-3 and iron are related. In the same water sample, iron is proportional to Helium-3, which makes us realize that the iron is not reacting; it is just getting diluted as the ocean mixes.”

It had been long held that iron in the waters of the region had just sunk to the seafloor. But the finding means that some of it isn’t lost to the deeps. Instead, levels of the metal can be found traveling away from the East Pacific Rise and other mid-ocean ridges and on into interiors of the world oceans.

“The oceans are so remote from land and a lot of times they will have a perfect soup but nothing grows. Why is that? It’s because there’s no iron,” said Resing. “One of the things regulating production in the Southern Ocean is iron. Our study is important because it shows that the mid-ocean ridges that run throughout all the ocean basins represent an important source of iron to the Southern Ocean.”

The scientists plugged their findings into an ocean model to look at the impacts that this iron might have on carbon uptake in the Southern Ocean. The model showed that the iron influenced phytoplankton growth there. The tiny plants are important because they absorb carbon dioxide and play a role in global climate cycles.

“Our model indicates that hydrothermal and volcanic activity on the seafloor are things that need to be considered when looking at carbon uptake in the oceans,” said Resing.

Full results of the study are published in the journal Nature. It was funded by the National Science Foundation as part of the GEOTRACES program.