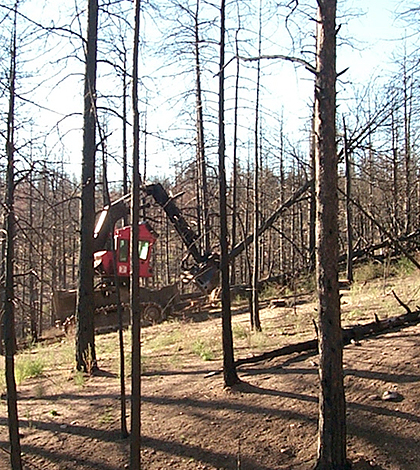 Sorry, Smokey. Forest fires do happen, and in some cases they bring marked long-term benefits to an ecosystem, such as increased biodiversity and soil nutrients. To a logging company, however, a burnt forest means burnt product. Many logging companies will attempt to mitigate their losses by salvage logging after a fire, collecting whatever useable timber remains in an area. The practice is economically beneficial, but its impact on the ecosystem hadn’t been quantified until recently.

Joe Wagenbrenner, assistant professor at Michigan Technical University’s School of Forest Resources and Environmental Science, studied salvage logging for nearly a decade at sites in Montana, Colorado and Washington. His and his colleagues’ findings were published in a recent edition of Forest Ecology and Management.

“Salvage logging continues to be sort of controversial,” Wagenbrenner said. “We just wanted to understand what the impacts of the soil and erosion rates were so we can help managers use that information.”

It’s not so much the act of removing useable timber that might affect an ecosystem, but the tools that are necessary to get the job done. Salvage logging requires the use of heavy machines, such as feller-bunchers, which cut and pile trees, and skidders, which move the piles out of the work zone. These machines can leave trails of compacted soil as they move about, particularly the skidders, as they make multiple trips up and down a plot.

“Some of the skidder tracks look more like roads than trails,” Wagenbrenner said.

Soil compaction is an issue in any ecosystem, as it reduces water infiltration and promotes runoff. In theory, salvage logging would greatly increase soil compaction in a forest after a fire. The researchers also compared ground cover, vegetation growth and runoff sediment in a recently salvaged forest with that of an unsalvaged control plot. Forestry regulations often require logging companies to take certain precautionary measures against the erosion that logging produces. In many cases, loggers will plant seeds to bolster local vegetation and ground cover, but it can take years for the plants to grow tall and deep enough to reduce erosion. Some logging companies treat salvaged areas with “slash,” small branches and treetops that provide no useful timber, but can temporarily improve ground cover. Wagenbrenner and his colleagues included a slash-treated plot in their study to see just how well it protected a salvaged forest.

The study required plenty of patience, Wagenbrenner said, and maybe just a bit of grit. Working in the aftermath of forest fires meant working in dry, dusty settings with no shade to assuage the heat. Sensor installation and initial measurements took long enough, but then there was the waiting — for rain to fall and runoff to occur, for the logging companies to actually get around to the salvaging — and plenty of it.

“Over a nine year study, most of that time was pretty inactive,” Wagenbrenner said. “The latter years especially, there were some years with no [fire] events to clean out, some with just one or two.”

As expected, the sites where skidders operated showed the highest erosion and compaction rates. Skidder sites featuring slash treatment showed no signs of reduced compaction, but the erosion there matched that of untreated feller-buncher sites.

Wagenbrenner said he and his colleagues are now working in California to study additional measures that logging companies could take to mitigate runoff and soil compaction. One such measure is “ripping,” in which skidder trails are plowed to improve water infiltration into the ground. The researchers are also examining if water bars — mounds of earth designed to break-up runoff as it flows downhill — are beneficial or harmful following salvage logging operations.

“I think now we have some data that we can actually use to help managers make decisions about if [salvage logging] is a good idea or not, or what the impact is going to be,” Wagenbrenner said.

Top image: The feller-buncher is used to cut down and bundle useable timber. (Credit: Joe Wagenbrenner)