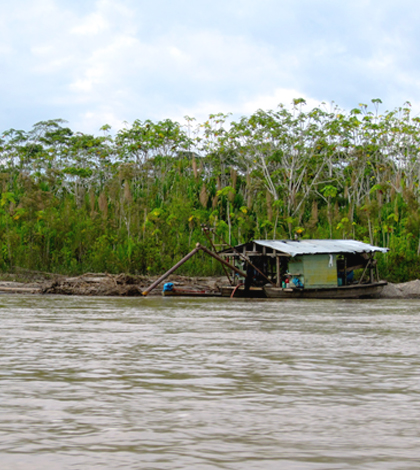 The process is almost alchemical. Take a bucket of soil, sediment and scattered flecks of gold, add mercury and wait. After the mercury binds the disparate bits, the resulting amalgam is easily removed from the remaining slurry. A blowtorch burns the mercury off, leaving nothing but pure gold.

To the Peruvian miners that employ it, the method might as well be magical, as it turns loose scraps of metal into an income that could be otherwise hard to produce in the remote Amazon rainforest. But all that excess mercury, whether burned off or dumped on the ground, has lasting health effects that can be felt hundreds of kilometers away from a mining operation, according to a new Duke University study.

“Mercury is used pretty much just for gold mining these days,” said Heileen Hsu-Kim, professor of civil and environmental engineering at Duke. “It’s really good at extracting gold out of soil and sediment particles.”

Many countries have banned the use of the chemical for mining in lieu of more health-friendly alternatives, she said. But in developing countries such as Peru, the method has grown in popularity as gold prices have rocketed upward over the past decade.

Mercury poses serious risks to miners and their families, capable of hindering cognitive performance, neurological and cardiovascular development in children especially. The new study, published in the journal Environmental Science: Processes and Impacts, shows that mercury can accumulate to unsafe levels in fish at least 500 kilometers downstream from a mining site. Fish are a dietary staple in many rural Peruvian communities, making the issue one of human and environmental health.

The researchers took two trips to Peru — one during the rainy season and another during the dry season — to collect samples in the Madre de Dios, a river that runs through the southern portion of the Amazon. Starting at the river’s headwaters, they boated downstream and sampled sediment, water and fish at 62 sites. “The conditions of sampling were quite unusual,” Hsu-Kim said. “The team often didn’t have direct access to power. There were a lot of logistical issues with how to preserve the samples as they were traipsing through the Amazon.” Hsu-Kim, who wasn’t present during field sampling, said the biggest challenge was shipping samples back to her lab in North Carolina.

Analysis revealed that mercury contamination has a long reach. Surprisingly, Hsu-Kim said, background environmental levels of mercury were fairly low — only 50 parts per billion. Similar gold mining operations often show mercury at concentrations around 1,000 ppb. The kicker is that, even with low background levels, mercury accumulation in river biota is very high.

When mercury enters the water supply, whether directly through dumping and drainage, or indirectly via burned mercury in the atmosphere, microorganisms in the sediment process it into the highly neurotoxic methylmercury. That compound climbs the food chain, eventually winding up in fish that humans target for food.

There are ways to prevent or limit the spread of mercury into the environment, Hsu-Kim said. Excess mercury from soil and sediment extraction is safer when properly disposed of, and burning the amalgam in a special hooded structure can even permit some recapture of the chemical, but the process is “very inefficient,” Hsu-Kim said.

“There could be ways to slightly re-engineer these [structures] and add various filters to the outlets to improve recapture,” she said.

Hsu-Kim and her colleagues are now looking at the community health side of the mercury contamination issue, surveying household heads as well as mothers and their children. They’re also studying regions where gold mining and natural gas exploration coincide to see how one operation impacts the other.

Despite the study’s findings, Hsu-Kim says total avoidance of fish is not the solution for affected Peruvian communities.

“I didn’t want to send a message that the communities here need to avoid eating fish,” she said, noting that reduced consumption of particular kinds of fish might be more effective. But any short-term solution will require cooperation with local officials.

“We have to work with the local health ministry to work on a message for the people here,” Hsu-Kim said.