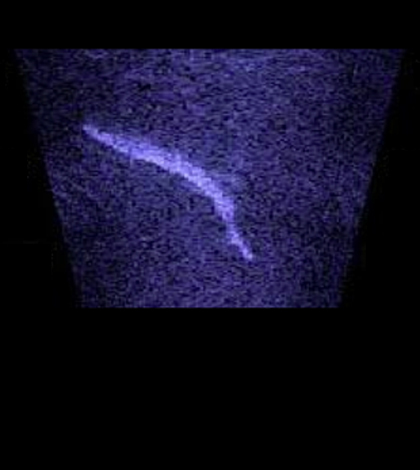 When it comes to determining the length of a fish, a recent study suggests that advanced sonar technology may be about as reliable as fishermen themselves.

“The size information you get is good, but it’s not without error,” said Joseph Hightower, fisheries biologist with the U.S. Geological Survey’s North Carolina Cooperative Fish and Wildlife Research Unit.

That sums up the results of a study recently published online in the Journal of Fish and Wildlife Management, of which Hightower is the lead author.

In the study, experimental ponds stocked with fish of a known size and species were scanned with a high-end sonar imagery system. The researchers compared the fishes’ actual sizes with estimates of fish length derived from the sonar images. The results weren’t perfect, but they were often close. More importantly, it was a step forward in honing in on how fisheries managers can effectively use this emerging technology.

“That’s where we tried to make a contribution—not only understanding what it can do but also what it can’t do,” Hightower said. “If you have a realistic expectation for what you can get from the sonar, then I think you can use the data appropriately.”

The results depended on the size and species of fish. Like an exaggerating angler, the sonar estimates tacked on a little extra length to white perch, the smallest species tested. On the other hand, estimates of larger Atlantic sturgeon were consistently short. Striped bass and channel catfish length estimates were fairly accurate.

Though sonar has long played a role in the fisheries world—think fish finders—the multibeam sonar instruments like the one Hightower tested are still just catching on. Standard fish finders use the reflection of a single beam of sound to gather information on submerged surfaces. More advanced might use a few more. The DIDSON 300 model used in the study, developed by Sound Metrics, Corp., uses 96 beams.

“This multibeam sonar that we were using has not been been around too long,” he said. “I think people are still in the process of figuring out how to use it.”

Fisheries scientists are increasingly interested in using sonar for fish surveys because the technology could help overcome the limitations of traditional methods. Trapping fish can be difficult because the best fish habitat—a deep hole clogged with trees, for example—is often a tricky place to install a net. Biologists can implant locating transmitters into net-caught fish, but that data is limited to where a fish goes. It doesn’t say much about what the fish does once it gets there.

Sonar could help change that.

“For the most part, I think people work on these fish without ever seeing what they do,” Hightower said. “I think the ability to observe fish and see swimming behavior and see how fish are positioned relative to different kinds of habitat is something that, in most rivers, we haven’t had the ability to do.”