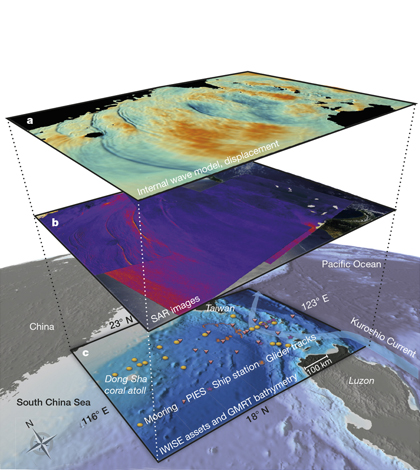 As you sit on the beach in California and watch the waves roll in, you probably don’t wonder where they began. But those waves could have started in New Zealand or even Antarctica and travelled under the ocean’s surface for thousands of miles before arriving along the coastline. According to Matthew Alford, those waves, known as internal waves, can be taller than skyscrapers.

The waves are extremely difficult to measure and are challenging to predict, but they seal the fate for all kinds of underwater operations, such as submarine missions, scuba diving, fishing and offshore drilling.

A research project looking into the waves was funded by the Office of Naval Research and the Taiwan National Science Council, who gathered a huge international team of scientists to study internal waves in the Luzon Strait of the South China Sea. The program is known as the Internal Waves in Straits Experiment (IWISE), which was a five-year effort to do critical research for tracking the waves, with the goal to create a data set that can be used for predicting them.

The study’s findings, published in the journal Nature, look at when and where the waves start. The team used moorings, underwater vehicles that crawl up and down a moored wire as well as autonomous gliders that sailed through the water to take measurements every time an internal wave rolled through the Luzon. The above image shows the two underwater ridges — indicated in green, orange and red — between Taiwan (top) and island of Luzon (bottom). The color scale indicates elevation from lowest (blue) to highest (red). (Credit: Maarten Buijsman / University of Southern Mississippi)

According to Alford, an affiliate principal oceanographer at the University of Washington and lead author of the study, the Luzon is one of the most challenging places to do research in the world because of the strong current, but it gave them very surprising results. They measured waves that reached 700 meters high, almost the height of two Empire State Buildings stacked on top of each other. To put it into perspective, “if you’re a scuba diver at 100 feet and one of these waves comes along… three minutes later you’re at 600 feet,” explained Alford.

So, understanding how they work is crucial on many different fronts. Naturally, cold, dense water sits on the ocean floor, while warm water rises to the top. But when an internal wave comes in, it brings the densest water to the top. Alford said the waves were over 200 meters high, making for an extremely unstable environment and causing major turbulence.

This level of turbulence can shift climate models dramatically. Alford said if he runs a climate simulation with the same amount of turbulence everywhere, then he will get one answer for sea level rise in 50 to 100 years. But if he includes the locations of internal waves, he gets an entirely different, albeit more accurate, answer.

“The uncertainty between models that include internal waves and turbulence and the ones that don’t is about 35 centimeters, and that is a lot of sea level rise,” said Alford. “Internal waves are one of the big things that stop us from being able to predict climate change.”

In addition to climate change, the team made some interesting observations of marine life in relation to the waves. Alford said the waves are like clockwork when they roll in. With the dense water they are pulling up comes a slew of nutrients from the sea floor. They noticed after each wave, a pod of pilot whales would seem to almost be chasing it, recognizing that the nutrient-rich water made for a great place to forage.

Now that the scientists are one step closer to understanding these monstrous waves and their effects on all facets of the ocean’s ecosystem, they plan to expand further on the research by travelling to the Arctic. They are predicting that the waves might be contributing to ice melt and are eager to take measurements there, as well.