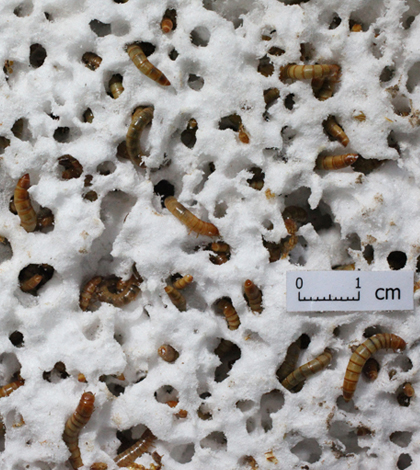 Mealworms eating through plastic. (Courtesy of the Department of Civil and Environmental Engineering)

Only 10 percent of the 33 million tons of plastic waste produced by the U.S. each year is ever recycled, meaning most of it remains to clutter up the planet. Some of it is also considered to be non-biodegradable, meaning the tons generated today will still be lying around tomorrow. However, according to a release from Phys.org, there is some good news on the biodegradability front: plastic-eating worms.

Stanford researchers have discovered that mealworms, larvae of the darkling beetle, have the ability to digest Styrofoam and live off it just as they would any natural food source. The key to their ability to use plastic as food stems from the presence of bacteria in their guts that can break it down. The bacteria transform the Styrofoam into carbon dioxide and tiny pellets that can be used as soil for crops.

Waxworms, Indian mealmoth larvae, have also been found to break down polyethylene. In future research, scientists plan to find out if mealworms, waxworms and others can also break down polypropylene, microbeads and bioplastics.

Top image: Mealworms eating through plastic. (Courtesy of the Department of Civil and Environmental Engineering)