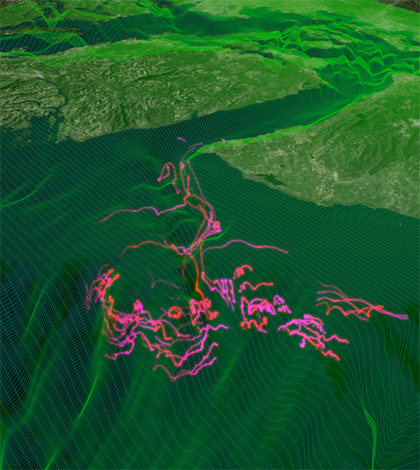 An image from a numerical simulation of the region, including Juan de Fuca Canyon. (Credit: Parker MacCready)

In the middle of the night during an April 2013 cruise of the coast of Washington, the research vessel Thomas G. Thompson went black. The waters were so thick with krill that the ship’s cooling intake ducts had clogged with crustaceans, shutting down the 274-foot vessel.

“Which will scare the hell out of you, because it really is dark when that happens,” said Parker MacCready, a University of Washington professor of oceanography who was onboard.

The shutdown was especially tense because a towed sensor package was overboard at the time, at the end of its tow cable near the bottom of a submarine canyon that the researchers had headed out sea to survey.

In the end, the pipes were cleared and the ship was on its way, eventually bringing back the most detailed measurements yet of flows through the Juan de Fuca Canyon, a 100-kilometer gouge that cuts across the continental shelf. The results of the study describe an underwater river that funnels nutrient-rich, deep-ocean water into the Salish Sea estuary system, which includes the Strait Juan de Fuca, Puget Sound and the Strait of Georgia.

“The amount of water flowing into this thing is the same as if it were the Amazon River, except it’s flowing underwater and it’s flowing towards the land instead of away from it,” MacCready said.

The study, co-authored by MacCready and led by Matthew Alford, oceanographer with the UW’s Applied Physics Laboratory, was published recently in the journal Geophysical Research Letters.

The measurements are the best evidence yet for the role of the canyon flow in a pattern of circulation that sends a dense lower layer of ocean water into the inland system while the upper layer flows persistently out to sea. Scientists and fishermen have long known about the canyon, which runs 6 kilometers wide and 500 meters below the ocean’s surface at its deepest. Scientists have also suspected that upwelling ocean water flows through the canyon and into the Strait of Juan de Fuca, but there have been so few measurements in the canyon that it has been impossible to say for sure, MacCready said.

Nailing down the source of the ocean water that flows into the inland system is important because the upwelling water has a significant influence on nutrient, oxygen and acidity levels in the straits and sound. That chemistry contributes to both the region’s rich productivity and problems like ocean acidification. By understanding the physical processes of how and where water moves from the ocean to the estuary, scientists can better construct numerical models that will help predict how the system might shift with climate change.

“That’s why I go out to sea, even though I’m primarily a modeler,” MacCready said. “I still need to go to the real ocean to see what’s actually happening with my own eyes, with our own instruments.”

To help clear up the action in the canyon, the researchers in 2013 boarded the Thompson, owned by the Office of Naval Research and operated as part of the University National Oceanographic Laboratories System fleet. From April 25-26, the ship and crew repeatedly towed a flow-sensing instrument package called SWIMS, or Shallow Water Integrated Mapping System, across and along the canyon. SWIMS is a 300-kilogram, torpedo-like structure equipped with two acoustic Doppler current profilers, each mounted on a gimbal to ensure one always faces straight up and the other straight down, regardless of the package’s orientation in the water. Temperature and conductivity sensors were also mounted in the instrument’s nose.

On each pass over the canyon, the ship winched SWIMS up and down through the water column to capture a full slice of velocity, temperature and salinity (by way of conductivity) data.

The results, MacCready said, were unambiguous: a strong and persistent landward flow in the canyon that was distinct from the tide-driven flows in the water above it. The amount of water they observed was easily enough to feed the estuarine circulation in the Salish Sea system. They also detected large, turbulent underwater waves in the canyon that trigger intense mixing with the surface waters.

The ship just happened to be at sea during a period of winds that were favorable to upwelling, which pushes water up the canyon, MacCready said. That was lucky, because another set of wind conditions would have water flowing out of the canyon instead, which was less interesting to the scientists at the time.

“Although the water going out is part of the story, and it’s something that you’d want to characterize in a more complete experiment,” MacCready said. “I’d want to see that next.”

Top image: An image from a numerical simulation of the region, including Juan de Fuca Canyon. (Credit: Parker MacCready)