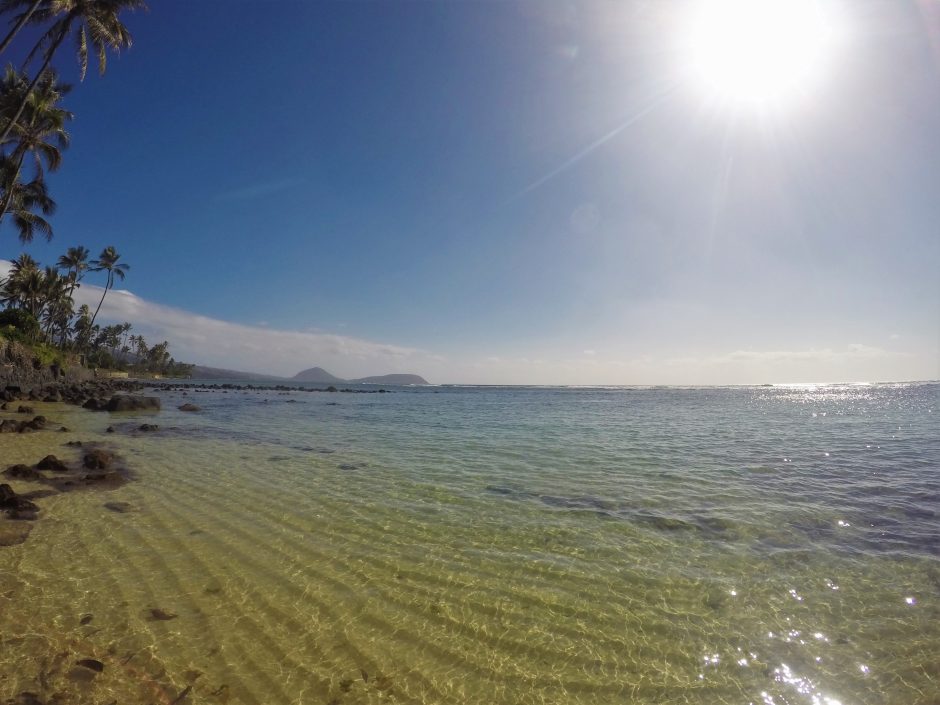 Coral reefs are among the world’s most diverse ecosystems, home to about one-third of all oceanic species of fish, and tens of thousands of marine species in total. Coral reefs are also valuable to humans, sheltering coastal areas from storms and offering billions in food and income all over the world. Unfortunately, many reefs have been permanently damaged or destroyed, and of those that remain, about 75 percent are threatened.

Those reefs that lie very close to shore, nearshore coral reefs, are in many ways the most important to humans—and the most imperiled. There are many factors that put these nearshore reefs in danger, but one that has been poorly understood until now is submarine groundwater discharge (SGD), groundwater that seeps beneath the surface of the ocean and into the coastal zone where nearshore reefs exist. New research led by a team from the University of Hawai’i at Mānoa‘s School of Ocean and Earth Science and Technology (SOEST) reveals some surprises about how this natural—and sometimes dangerous—source of freshwater and nutrients affects coral reefs.

Lead author Katie Lubarsky corresponded with EM about the research.

SGD is prevalent and of particular interest for nearshore coral reefs for many reasons.

“First, the shallow depth of the seawater in these areas allows for SGD to discharge; on deeper reefs the pressure created by the seawater can prevent groundwater from escaping the aquifer,” Lubarsky describes. “Additionally, SGD on nearshore reefs typically has a higher freshwater component, so SGD on these reefs will carry a higher signature of land-based nutrients and pollutants, as well as lowering the salinity on parts of that reef. If you have been swimming on a reef and have noticed an area of colder water and have seen the shimmering mixing of freshwater and seawater, then you have observed SGD.”

The team started with the knowledge that coral reef growth is shaped by two processes contribute to the overall growth of coral reefs: the actual growth of the coral itself, and bioerosion. The team measured both growth rates and bioerosion rates to explore how SGD affects these processes by outplanting small sections of both living lobe coral and dead coral skeleton on the reef. 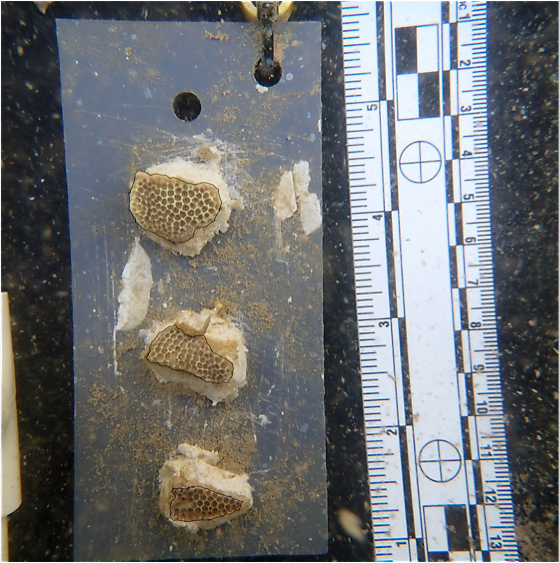 These are coral pieces before the six-month deployment on the reef. (Credit: Katie Lubarsky, HIMB/ UH SOEST) 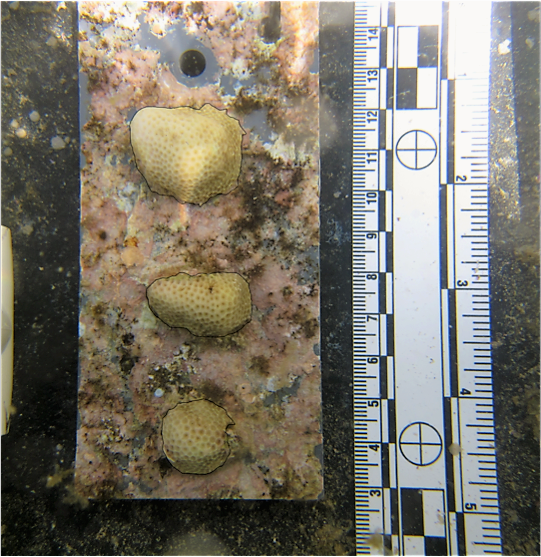 These are coral pieces showing growth after a 6-month deployment on the reef. (Credit: Katie Lubarsky, HIMB/ UH SOES)

“Because corals are colonial organisms made up of thousands of polyps, they can be fragmented into smaller pieces, which will survive as their own colony,” details Lubarsky. “So, for our experiment, we collected coral fragments from three donor colonies by breaking off small pieces from the larger corals. We brought these fragments back to the lab and allowed them to recover from fragmentation in running seawater.”

They selected places with different levels of SGD, and measured size changes in the living corals over a six-month period and measured bioerosion rates in the dead pieces of coral for one year using a micro-CT scanner, before and after, to scan in three dimensions.

“We outplanted corals and bioerosion blocks to 20 stations at each of two sites in Maunalua Bay,” remarks Lubarsky. “The stations at each site were set up on a grid around an SGD seep, so that stations would be exposed to different levels of SGD. We measured the amount of SGD delivered to each station by collecting water samples at each station four times over the course of a 24 hour period. Two of these samples were taken at low tide, when SGD is the highest, and two were taken at high tide, when SGD is the lowest, so we could see the range of SGD at each location. This process was repeated on two separate days during different seasons at each reef site.”

No live corals were CT scanned; rather, blocks of dead coral, which the team used as settlement substrate for bioeroding organisms, were CT scanned before and after deployment to measure the amount of coral skeleton removed by bioeroders.

In high SGD areas, coral reefs were hit hard. Corals that were proximal to SGD seeps survived poorly, probably because too much freshwater caused them stress.

“We hypothesize that high amounts of SGD stressed, or even killed, corals due to the low salinity of the SGD,” remarks Lubarksy. “Corals are marine organisms, so too much exposure to fresh water can stress them and inhibit metabolic functions such as growth. However, it appears that bioeroding organisms at these sites were more tolerant to freshwater exposure than the corals were. Because they could tolerate the low salinity caused by the SGD, bioeroding organisms likely utilized the nutrients in the SGD, leading to increased bioerosion where SGD was high.”

Many bioeroding organisms benefit from being in higher nutrient environments because they are filter feeders; this is a likely explanation for the higher rates of bioerosion. However, the team was surprised to learn that SGD actually improved coral growth when both the freshwater and the nutrient enrichment from the groundwater remained at low levels.

“We found that in areas where SGD was present in lower levels and had mixed with seawater, corals grew more than in areas where they were only exposed to seawater,” explains Lubarsky. “Corals in these areas were likely able to utilize the nutrients delivered by the SGD without being stressed by low salinity like corals in high SGD areas. It is important to note that the corals in our study were outplanted in a way that prevented competition between the outplanted corals and algae on the reef. This is important, because increased nutrients generally increases the growth of algae, which may lead to algal overgrowth of corals. Our study design focused on the direct impacts of SGD on coral growth and not on the potential negative effect of enhanced algal growth due to SGD-derived nutrients.”

What causes higher levels of nutrients in SGD? Human activity might, for example, reduce how much water recharges aquifers and instead becomes runoff reaching the ocean. Other human activities can also change the nature of SGD.

“For example, in our study, SGD originating in an aquifer where many homes use cesspools carried a higher nutrient signature than SGD from an aquifer where cesspools were less common,” details Lubarsky. “Any human activity that causes different chemicals to leach into the groundwater will have an effect on the chemical composition of SGD.”

However, the presence of a nearshore reef in an urbanized area doesn’t mean the reef can’t survive, SGD or not. Active management to limit fine sediments and reduce invasive algae assist greatly in coral recovery in these urban areas.

“Our study did find that, in the absence of competition from other organisms such as algae, corals can survive and grow on SGD-impacted reefs, even in highly urbanized areas,” adds Lubarsky.