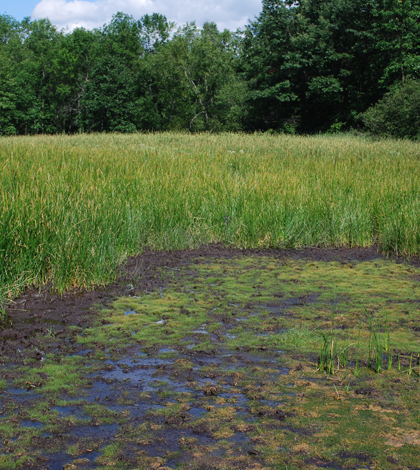 An inland salt marsh near Maple River, Michigan. The grass, S. americanus, is threatened in the state. (Credit: Tony Eallonardo)

Inland salt marshes are a globally rare ecosystem that are especially scarce in the Northeast United States, where they’re known to cover only 40 acres across four states.

These wetlands away from the coasts are characterized by saline water and soils and salt-tolerant plant species. They typically depend on evapotranspiration that concentrates salts in wetland basins, but the Northeast’s humid climate limits that process. The few inland salt marshes in the region occur around springs that bring naturally saline water to the surface.

Efforts to conserve or restore these rare habitats have been hampered by a lack of scientific information on what makes them tick. Scientists in central New York– a region where inland salt marshes were once relatively prevalent thanks to the famously saline groundwater resources there–recently published likely the most comprehensive look yet at the environmental drivers of these systems and their unique plant communities.

Though inland salt marshes are naturally rare in the Northeast, they’ve been cut back even more by human development, according to Tony Eallonardo, lead author on the analysis, recently published in the journal Wetlands.

“One inland salt marsh in New York, probably one of the historically larger ones, the salt spring was just capped by concrete by a municipal entity back in the 1980s,” said Eallonardo, a project scientist at Syracuse-based O’Brien & Gere, an engineering and environmental consulting firm. “They just didn’t want to deal with the salt spring.”

Another big one–about a thousand acres–is now the site of a minor league baseball stadium, said study co-author Donald Leopold, professor of environmental and forest biology at the State University of New York’s College of Environmental Science and Forestry. The water from this spring near Montezuma, N.Y. is three times saltier than seawater. The red color is the result of oxidized iron in the the water. (Credit: Tony Eallonardo)

By studying the plant species composition, hydrology and soil chemistry of inland salt marshes, scientists will be in a better position to conserve those that remain. It could be especially important for staving off invasions of non-native plants like Phragmites, a particularly aggressive aquatic species. The marshes could also give clues for how to manage salt-related human impacts like road salt runoff or briny wastes from industrial processes.

For their study, Eallonardo and Leopold analyzed four salt marsh sites in Michigan and New York. They surveyed plant species, water levels and the electrical conductivity, pH and nutrients of soils.

The plant surveys showed that as the soil became more saline, the species composition transitioned into relatively short grasses, sedges and rushes. Replacing the perennial species common in freshwater wetlands were annual, warm-season species atypical of the Northeast. Annual species favor open landscapes because they have to regrow from seed every year, and salt marshes provide spaces like mud flats more favorable to that strategy. Succulent plant species, such as salt sandspurry, tend to grow in the areas of the marshes where conditions are most stressful.

Eallonardo said their monitoring showed just how abrupt the transition between freshwater and saltwater marshes can be.

“We’re inland in these humid climates, and then suddenly we change soil environmental conditions where the salinity is two times greater than sea water,” he said. “And those changes can occur over a span of, in some cases, the scale of centimeters.” The suite of parameters they looked at over time made it clear that it takes more than just salty soil to support a sustainable salt marsh plant community. Their nutrient analysis showed the plants also depend on low-nutrient soils like marl. Periods of disturbance, like drought or flooding, were also important.

“It’s a combination of all these things that seem to support the highest quality inland salt marshes: the presence of high salinity, sterile soils and disturbance,” Eallondaro said. “As we look to conserve and restore these, it’s really that recipe that needs to come together.”

As is the case with many wetlands, salt marshes can be an unpleasant place to work. The salty water that springs from the ground also tends to be high in sulfur, adding a rotten egg smell to the standard bugs and muck. That’s opposed to fens, another type of wetland habitat where Leopold conducts additional wetland research.

“(The fens) are relatively bug free. They’re full of orchids. They are some of the nicest places in the Northeast United States to hang out in,” Leopold said. “Salt marshes aren’t in that category.”

On the other hand, Eallonoardo says he’s “perfectly fine with them.”

“I don’t  think I haven’t fully enjoyed even the worst days out in  an inland salt marsh, quite honestly,” he said.