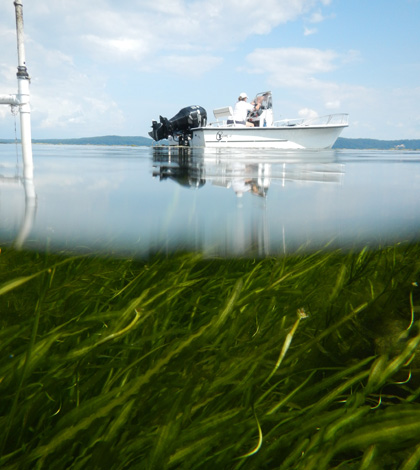 On the water over the seagrass of the Susquehanna Flats (Credit: Cassie Gurbisz)

Stretching nearly 20 square miles along the bottom of the Chesapeake Bay, the Susquehanna Flats are a prized spot among New England anglers. The thick grasses lining this underwater prairie provide shelter and sustenance for many aquatic species, and help filter water flowing into the Bay.

But the Flats haven’t always been the lively haven they are today. A tapering decline in the 1960s due to excessive nutrient loading led to a sudden death in 1972 at the hands of Tropical Storm (formerly Hurricane) Agnes. The innocuously named storm pummeled the Bay with 19 inches of rain and 30 million tons of displaced sediment. When the skies cleared, the Susquehanna Flats were no more.

Then, in the early 2000s, something odd happened. The barren Flats sprung back to life, miles of underwater grasses once again blanketing the Bay floor in a thicket of vibrant green. At the nearby University of Maryland Center for Environmental Science, researchers puzzled over the vegetative Lazarus act.

“We’re trying to figure out what made that grass come back,” said Cassie Gurbisz, a graduate student at UMCES and lead author of a study of the Flats published in Limnology and Oceanography. She structured her research around that question and another: “And now that it’s here, is it resilient?”

The study is actually the first in a trilogy that examines the effects of Tropical Storm Agnes and the rapid recolonization of the Susquehanna Flats. Using publicly available data sourced by the U.S. Geological Survey, the Chesapeake Bay Program and other monitoring efforts, the researchers picked out clues to the Flats’ recovery from decades of records.

There were plenty of figures to sift through. The Chesapeake Bay Program has sampled water quality every few weeks since 1984, Gurbisz said. And the USGS has kept daily records of Susquehanna River discharge since 1890. The researchers also pulled nutrient load data from earlier studies.

“It’s already been established: Nutrient loading into the Chesapeake Bay started to decline in the late ‘80s,” Gurbisz said. “We think that sort of set the stage, created favorable conditions for the plant bed to come back.”

A multi-year dry spell reduced the Bay’s nutrient inflow and left sediment undisturbed, offering the perfect period of respite for the struggling plants, Gurbisz noted. Once the grasses took root, a positive feedback process catapulted the Flats back to prominence at an unexpected rate.

“The grasses slow the water down and attenuate waves,” Gurbisz said, explaining the process. Dirt and substrate are then trapped in the grass bed, and fed on by the grasses themselves. The plants grow larger, making them more effective filters and continuing the feedback loop.

The grass beds also seem to absorb nitrogen from the water by means that aren’t totally understood, but are certainly beneficial to the overall health of the surrounding Bay.

“It could be that the plants are taking it up directly, or it could be there’s more time for nitrate to be processed by microbes in the sediment,” Gurbisz said. The processes that have brought the Susquehanna Flats back from the brink are the same that have made the grass bed so resilient today. Floodwaters from the Susquehanna River destroyed a portion of the Flats in fall of 2011, but already the grasses are flourishing once again.

That’s great news for anglers, because the Susquehanna Flats are renowned for their ability to produce trophy-quality catches. Juvenile fish of many species take refuge in the grass from big, hungry biters such as striped and largemouth bass. Chesapeake’s famous blue crab — a treat for stripers and anglers alike — also frequents the grass bed, particularly when it’s time to molt.

Gurbisz said there aren’t any plans to continue this research, but that could change in the future as finances permit. She did, however, seem pretty content with the money the team was able to obtain for the current series of studies.

“Funding is always a challenge, but we were lucky to have funding from the Maryland Sea Grant for this project,” Gurbisz said. “They usually do rounds of two years of funding, and they gave us three rounds — they also gave me a fellowship.”

For more information on the Susquehanna Flats and other Bay-area issues, check out the Chesapeake Bay Program online.

Top image: On the water over the seagrass of the Susquehanna Flats (Credit: Cassie Gurbisz)