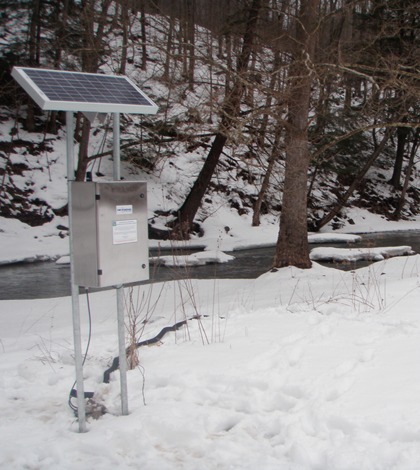 A solar panel and data logger connected to an in-stream sonde in the Susquehanna watershed (Credit: Susquehanna River Basin Commission)

While hydraulic fracturing for natural gas in the Marcellus Shale in Pennsylvania and southern New York has drummed up controversy, a shared appreciation for clean water quality in the region hasn’t been so divisive.

When environmental scientists from the Susquehanna River Basin Commission sought permission from private landowners to install monitoring stations on headwater streams that run through landscapes where drilling has been intense, the response was receptive regardless of their stance on fracking.

“They could be on one side or another,” said Dawn Hintz, an environmental scientist with the commission. “Some people were for the drilling, some were against it. It didn’t really seem to matter. They just wanted it monitored.”

As drilling operations grew in the upper basin throughout the 2000s–along with concerns about potential water quality effects–the commission in 2010 launched a remote water quality monitoring network. The network has grown to 58 stations that continuously monitor temperature, pH, specific conductance, dissolved oxygen and turbidity and broadcast the data online.

The monitoring stations are providing baseline data in small watersheds–some where drilling is intense others where it hasn’t even started, though permits have been issued that suggest operations could be on the way. The stations span public land and private, including some sites where the commission sought permission from landowners and others where landowners sought out the commission. They targeted streams with watersheds on the order of 30-60 square miles, which is small enough to capture local effects but large enough to carry the depth of water needed to keep instruments submerged. They also sought clean streams without prior degradation, making it easier to pinpoint causes of any new disruptions. Some of the little streams even support drinking water intakes for small municipalities.

“Anything that the public was concerned about, we tried to take into account when we were placing stations,” Hintz said. “We obviously cannot have a monitor in every stream, so we were attempting to hit as many as we possibly could that seemed to fit our criteria.”

The stations are typically installed in the winter, making for some chilly work days. That was especially the case while putting on one of their New York sites.

“You could see the ice freezing around us while we’re in the stream,” Hintz said. The stations collect measurements every five minutes, a frequency that Hintz said helps make sure the scientists don’t miss any events in these small streams, which can flush through quickly. The team receives email alerts when any parameter deviates too far from normal. Hintz said turbidity alerts are common, typically indicating a storm is fueling runoff in watershed. Alerts for pH or specific conductance will sometimes take a team member out to a site to collect samples fore more detailed analysis in a lab. It can also indicate that a malfunctioning probe needs to be replaced.

Though they were initially concerned about vandalism to the equipment in some well traveled areas, Hintz said the only incident so far has been a stolen solar panel. The biggest disruption so far has been Tropical Storm Lee, which in 2011 brought on the highest ever recorded flows in some of their streams and took out whole monitoring stations.

“Not just the in-stream part, but the data logger itself was completely taken down by high flows,” Hintz said.  “We had a couple months of just trying to clean up, trying to get stations back up and running, equipment fixed, equipment found.”