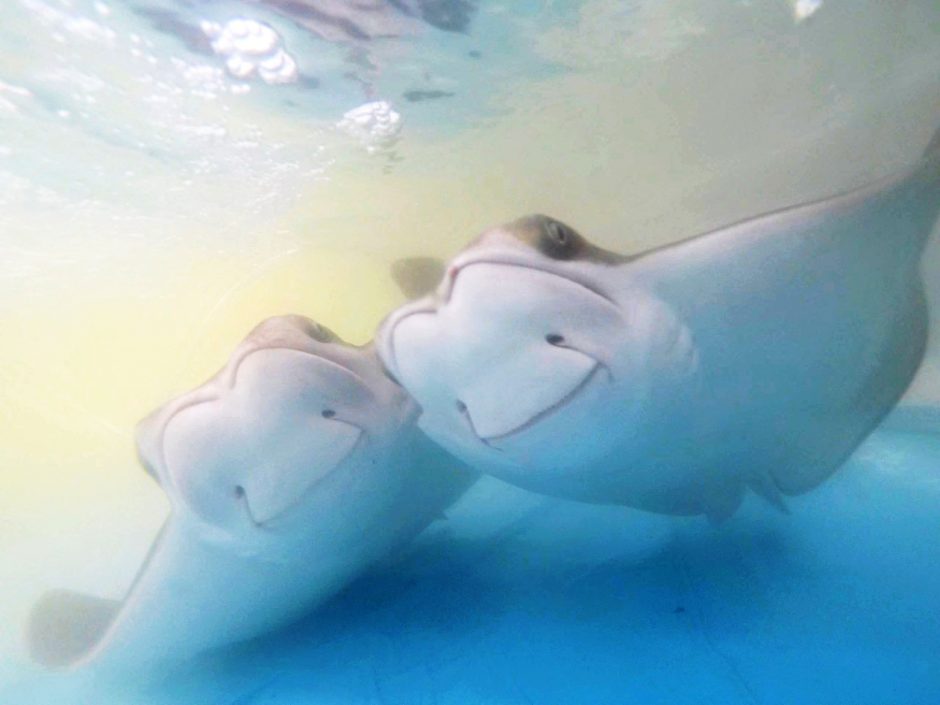 Underwater shot of cownose rays in a holding tank. Cownose rays migrate to Chesapeake Bay every summer to give birth to their pups and mate. (Credit: SERC)

For years, researchers have known that cownose rays mate and give birth in the Chesapeake Bay every summer. However, scientists have long wondered exactly where these rays go once the weather gets cooler, and why—and whether or not specific groups of rays return to the same bodies of water each year.

A tagging study led by a team from the Smithsonian Environmental Research Center (SERC) has finally begun to answer these questions. Study lead author and SERC marine biologist Matt Ogburn spoke to EM about this research.

This study represents three years of work, but it is, in some sense, just the beginning of what the team will learn from their tagging and tracking work.

“For this study, we had data from about 36 rays,” states Dr. Ogburn. “That was sort of our first two years or so worth of tagging. And then we have at least a year’s worth of data for each of those. Up to now, we’ve tagged about 85 rays, but they’re not all talked about in our study.”

The team used acoustic Vemco tags that are surgically implanted in the ray, typically in the body cavity.

“The tag transmits a series of clicks at 69 kHz every couple of minutes out into the water, and then they’re detected on an array of underwater microphones or hydrophones that are out there, listening for the tags,” explains Dr. Ogburn. “Those can decode the number of the tag that’s being sent out so you know which individual fish it is that’s near that receiver. Researchers around the world use compatible technology so that we can share that data back and forth and follow our fish.” 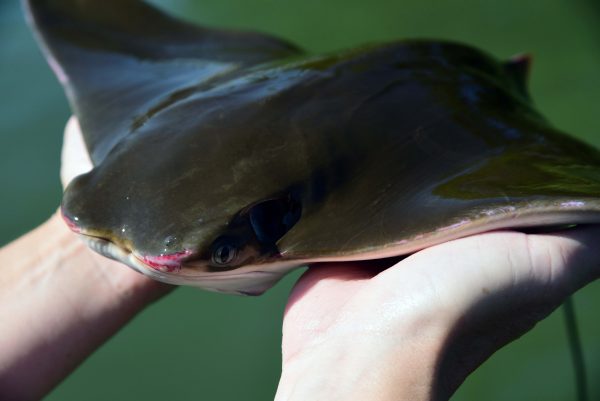 Cownose rays are migratory animals that come into the Chesapeake in summer and swim to Florida for the winter. (Credit: Jay Fleming/SERC)

“The nice thing about sharks and rays is that if you turn them upside down they sort of go under their own anesthesia; it’s called tonic immobility,” Dr. Ogburn describes. “Then we make a small incision into the body cavity, insert the tag, stitch it back up with a couple of stitches, and they heal quite well. We usually also put a small external tag on, so that if someone catches them, there’s a phone number they call, and a little message on it that says, ‘please release’ so people know that it’s an animal that’s being studied.”

Some of the first tags the team used were smaller and lasted for only two years. After working more closely with the species, the researchers were comfortable using a slightly larger tag, so they’re now using tags that last up to six years—and the data continues to trickle in.

Heading south for the winter

“We knew they left the Chesapeake Bay and went south in the fall,” comments Dr. Ogburn. “People know they go south past North Carolina in the fall and see them coming north in the spring.” 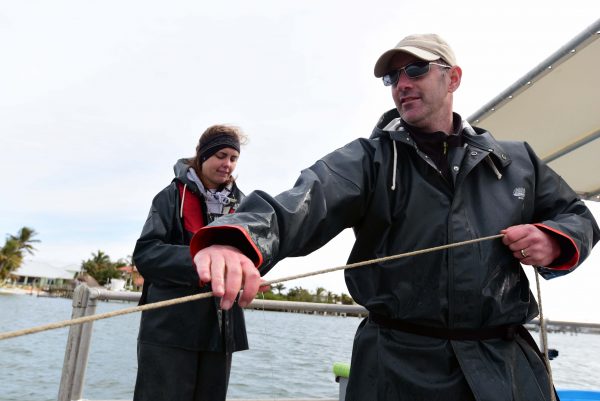 A single past research study tracked some of the rays heading south during the fall, and those specimens last pinged from Florida.

“The data that we have pretty strongly suggests for the first time that they’re hanging out there throughout the winter, going back and forth between the Chesapeake and Cape Canaveral,” confirms Dr. Ogburn. “Their nursery is up north, and that’s where they give birth and mate, and the young start their lives during the summer. They’re giving birth typically in June and maybe in a short time after. The early nursery zone is in places like the Chesapeake Bay, or North Carolina, or as far north as New Jersey we think. Then they migrate south for the winter because it gets too cold.”

Next, in this line of research, the team will be working to solve another mystery surrounding these elusive rays highlighted by the research of one of the paper’s coauthors, Bob Fisher of the Virginia Institute of Marine Science. Fisher has been studying and sampling rays in Virginia with the help of local fishermen for decades.

“From his sampling, he sees a lot of adult rays, and then he’ll see the just born, the young of year rays, but they’ve rarely ever caught one between ages one and three,” remarks Dr. Ogburn. “They usually start showing up in his collections again when they’re about age four. So one of his big questions has always been where are these juveniles going, where’s the juvenile habitat?”

The team tagged and released 20 rays last summer in the Potomac River to begin to answer that question; they’re now waiting to get their data from that group.

“One of the things about this technology is that you have to wait for other researchers to go out and download data from their receivers, and then go through it and send it out to you,” comments Dr. Ogburn. “You tag things and then wait for e-mails to come back with data.” 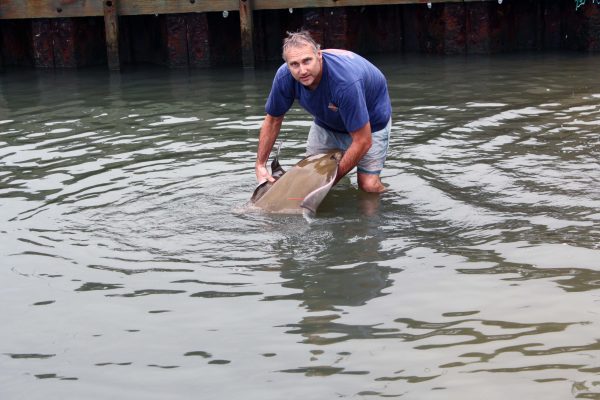 Bob Fisher, a biologist with the Virginia Institute of Marine Science, releases a tagged cownose ray into the water. (Credit: Stevens Institute of Technology, https://www.stevens.edu/news/robust-robotics-safer-world)

That’s not to say that the team hasn’t observed some strange movements by tagged specimens at times.

“There certainly are a few individuals that you release and you might not hear from them again, or you might hear from them for a little while, and then they seem to disappear,” states Dr. Ogburn. “They could be going into a place where nobody’s listening for them. Or if you never hear from it again, it’s possible that it could have died, or somehow the stitches worked loose, although that’s pretty unlikely.”

Tagged rays can also disappear if they’re eaten by predators; the team can usually tell by analyzing the data whether they’re tracking a ray or a predator, but it helps to have the full picture before making the call.

“One of the really interesting things that we saw is that most of the rays left the Chesapeake Bay in the fall and went south, but not all of them,” Dr. Ogburn offers. “There was one ray that left in late summer and then went north into Delaware Bay for a little while, and then went all the way to the south side of Long Island in late summer, and then beelined it all the way down to Florida in fall.”

It might have been easy to mistake that ray for a shark’s meal, especially based on the northward movement. However, one of the team’s colleagues had already observed males leaving the Chesapeake Bay soon after mating.

“That’s an example of your tag seeming to do something completely different; it left and went north instead of south for a while,” details Dr. Ogburn. “If we hadn’t known from his other research that males were doing that, we probably would have thought either that it was just a strange ray, or maybe that it got eaten by a shark that was going north; we wouldn’t have known what to make out of that.” 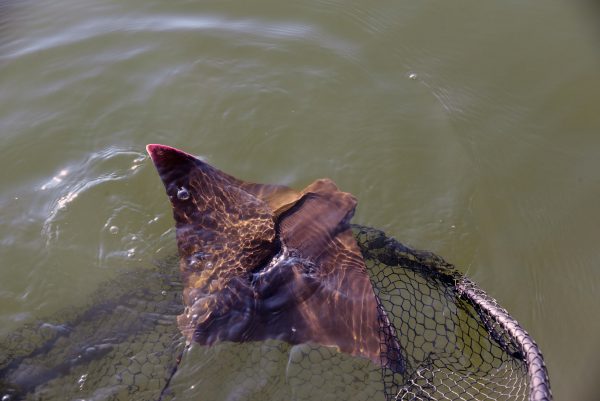 New developments may make tagging animals like these rays simpler in the near future.

“The tech manufacturer has developed a new kind of tag that may be available in sizes for larger animals soon,” comments Dr. Ogburn. “It transmits an encoded number so you can identify the tag. These new tags have a coating on the outside on one part of it that doesn’t degrade if it’s in seawater or in the body cavity, but if it’s eaten, and it goes into the stomach, the stomach environment will erode that part of the tag, and set off a switch that actually changes the code number. So if that new code number is picked up, the animal has been eaten.”

To tag the rays, scientists collaborated with fishermen, who sometimes catch cownose rays by accident. Although Bob Fisher at VIMS has been working with fishermen for decades, the SERC team is also accustomed to this kind of cooperative effort.

“We’ve had relationships with fishermen for a long time here at the Smithsonian,” explains Dr. Ogburn. “We’ve done a fair amount of work with fishermen in the past, mostly on other species like blue crab. These are relationships we try to build and maintain, because fishermen know a lot about what’s going on out there, and they’re on the water a lot more than we are. There are questions like this that we’re well positioned to answer, thanks to working with them. I’m always excited when there’s an opportunity to work directly with fishermen; you can learn a lot from that.”

Controversies about how to manage the species are at the heart of the team’s research.

“From the perspective of some fishermen, both commercial and recreational, there’s the sense that the rays have gotten too abundant and they’re having negative impacts on the environment,” clarifies Dr. Ogburn. “From the conservation community, there are concerns that it’s possible we might be fishing too many of them and we need to protect them more. And whichever perspective you take, you need to know at what scale to manage them.” 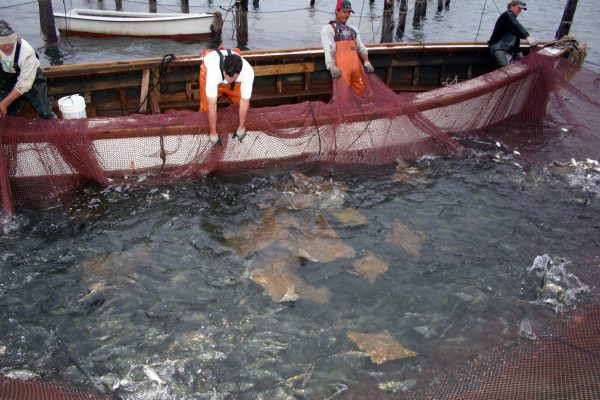 “Our data is pointing toward that second case, where you might have the same ones coming back to the same state or even the same bay or river each year,” remarks Dr. Ogburn. “If that’s true, you have smaller, local populations, and we need to manage the species on that scale rather than trying to deal with a coast-wide population.”

The difference matters, in part, because the birth rate of cownose rays is so slow—just one pup per year, with adulthood coming only after seven to eight years. Any management mistakes can be serious in this kind of population since overfishing in any given spot can eliminate an important source of biodiversity.

“We’re continuing to tag rays, and we’re also hoping to collect genetic samples to see if there are genetically distinct groups in different places; our migration data is suggesting that there might be,” comments Dr. Ogburn. “So we and several other groups of people are trying to collect rays, and bits of ray tissue, from different places. If there really is a separation between different places you should see it in their genetic data. So as a research community, we’re trying to put together both migration data and genetic data to try and answer the question of what scale they should be managed at.”

Top image: Underwater shot of cownose rays in a holding tank. Cownose rays migrate to Chesapeake Bay every summer to give birth to their pups and mate. Credit: SERC)