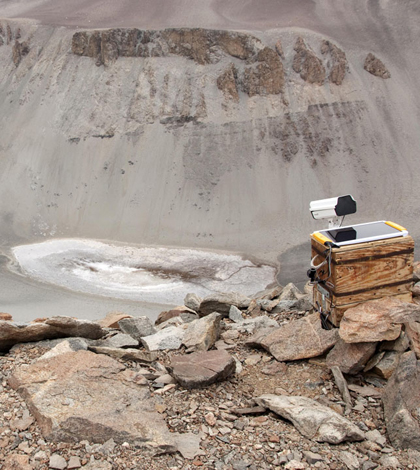 Experts long theorized that groundwater provided the salt necessary to keep Don Juan Pond in Antarctica from freezing. New research, however, finds they were mistaken and may give clues to how ponds formed on Mars.

The pond was named after the two helicopter pilots who discovered it – Don Roe and John Hickey – and has long been the center of scientific debate.

“Forty years of literature says groundwater is the cause,” said James Dickson, data analyst at Brown University. “But it never hurts to triple check.”

Dickson and a team of researchers used time-lapse photography to study the pond after initial observations pointed to a possible alternative cause to its saltiness.

“We weren’t studying Don Juan Pond in the first place,” said Dickson. “We saw water tracks around the pond and decided to take a look. We weren’t sure what to expect.”

So they set up digital cameras to take photos of the pond every five minutes and meteorological stations near the floor of Don Juan Pond that measured relative humidity.

“The cameras work really well. There’s 24 hours of sunlight down there, so the solar packs keep charging,” said Dickson.

Cameras at the site captured 290 images a day over two months for a total of 16,000 images. The images provided the necessary proof to confirm that Don Juan Pond gets its salt from precipitation, not groundwater.

“Moisture comes from the ocean and it moves inland as snow,” said Dickson. “The snow falls and it deposits salt on the surface.”

Dickson said that when humidity fronts move in, surface salt near the pond absorbs that humidity as part of a process called deliquescence. The same process is used advantageously by transportation managers who apply salt to icy roads. The salty water droplets that result make their way down sloping land into Don Juan Pond.

“The deliquescence model is much more appropriate for explaining the pond’s salt content,” said Dickson.

The approximate salt content of Don Juan Pond: 40 percent, which makes it 18 times saltier than seawater, Dickson said. That’s twice as salty as the Dead Sea.

In addition to disproving an aging hypothesis, the findings will aid the understanding of closed basin ponds on Mars.

Mars is a very different place than Earth. It’s very dry and its atmospheric density is much lower, Dickson said. Its average temperature is below the freezing point and its atmosphere is comprised of carbon dioxide. But the closed basins found there share an important feature with Don Juan Pond.

“What’s important is the mineralogy,” said Dickson. “We have some information on the basin bottoms showing that they have chlorides on their floors.”

Since the Martian ponds haven’t been active in more than four billion years, Dickson said it wasn’t possible to know exactly what types of ponds they were. The discovery that their floors contain chlorides is important, because 90 percent of Don Juan’s salinity is comprised of calcium chloride.

“It’s very close to what we’re seeing at Don Juan Pond. If we dried it up, that would be all that’s left,” said Dickson. “There are examples on Mars, and we think we have a lead on what caused those ponds.”

Dickson was joined by James Head at Brown, Joseph Levy at the University of Texas and David Marchant at Boston University in the research, which was funded by the National Science Foundation.