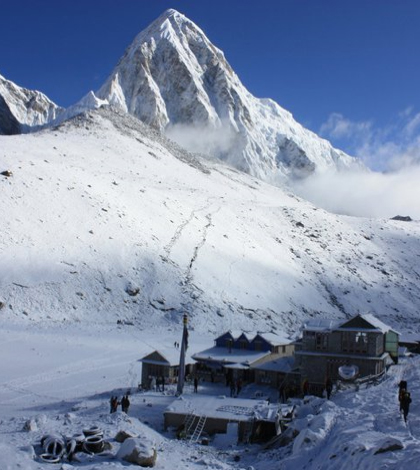 Nepal’s Mount Everest is a wonder to behold. Sitting at more than 29,000 feet, many attempt to summit it each year. And though some climbers don’t make it to the top, all of them have an effect on the mountain’s ecosystem.

What’s more, say scientists at Ball State University, the quantities of trash and human waste they leave behind are having disgusting effects on water quality downstream. At the bottom of Mount Everest, there are Sherpa communities too poor to afford water treatment plants and their members often drink untreated water straight off the mountain.

“You can find almost every kind of waste. Everything from water bottles, batteries, cans, toilet paper,” said Kirsten Nicholson, professor of geological sciences at Ball State. To ease the problem, she notes that the Nepalese government has built rubbish bins, facilities to hold waste and even sponsors trash pick-up drives.

But the efforts have yielded little for communities who have to drink the runoff. And the Sherpa’s response to poor water quality at one source does little, as they simply move higher up the mountain to find water. New water treatment plants could help, but so could limiting the number of visitors that the mountain gets each year. But that is unlikely because of the economic impact their tourism yields. A collected water sample, with its source in the background. (Credit: Kirsten Nicholson)

“The local people would be fine — there’s fewer than 3,000 people living in the whole region — using their existing system. And that’s to use human waste on their fields,” said Nicholson. “But we probably have 50,000 people visiting every year and there’s no proper waste disposal. For example, there’s one toilet where it drops within 10 meters of a stream.”

The water quality in that waterway isn’t good, says Nicholson, who is leading scientific efforts to chart the effects that visitors’ waste has on the health of other streams nearby. She is working with Klaus Neumann and Carolyn Dowling, both professors of geological sciences with Ball State, as well as collaborators in Nepal. These include Subodh Sharma, a professor of environmental science at Kathmandu University; Nurbu Sherpa, a community leader in Namche Bazaar village; Pemu Sherpa, a community leader in Khumjung; and a youth group from Namche whose members will help collect water samples and have found lab space for scientists to use.

The work involves collecting groundwater samples, taking them back to a lab and analyzing their E. Coli concentrations. Researchers would like to do more investigations using DNA research techniques, but this year Nicholson and others will zero in on bacteria, pH, temperature, total dissolved solids and conductivity. They will also analyze for arsenic and other chemicals to see if they meet World Health Organization standards. The goal is to figure out the extent of the impacts that waste from tourists has on water quality and then use those results to solve the dirty water problem, which is better or worse for some.

“Some communities have the capability to source clean, uncontaminated groundwater,” said Nicholson, referring to relatively cleaner waters found deep underground. But for those who don’t, getting the water they need is tough. “There are no roads, and they get their water by running hoses to springs.”

The management choice comes down to drilling wells or treating the water that runs off the mountain, and the local population can’t afford to do either. But the Ball State team hopes to change that, and is working to secure funding to bring in drilling equipment that would let them open up wells near the town of Kunde.

That will hopefully come after modeling work the group is looking to do that would span groundwater resources in the area. Drilling a few wells for potable drinking water could solve all of the town’s water problems, says Nicholson.

“We want people to have access to clean groundwater,” said Nicholson. “And the info we collect should be used as a base level to see if cleanup programs in the area are actually working. It will give the (Nepalese) government good baseline data to judge how effective its efforts are.”