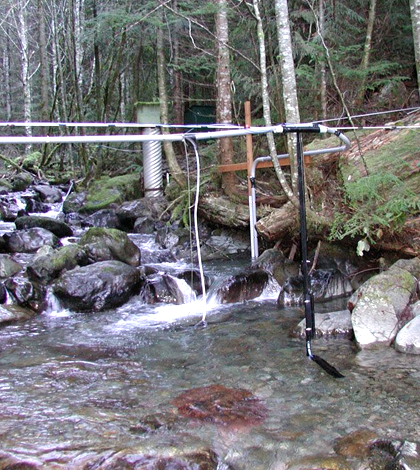 This station on Hard Creek supplied some of the study’s small stream data. (Credit: Weyerhaeuser)

Researchers also found that a warming climate is making that cooling effect trickier to detect.

The insights come from a 35-year study in forest lands managed by Weyerhaeuser Co. in the upper Deschutes River watershed. The timeframe overlapped with the rise of forestry regulations requiring timber companies to leave buffers of standing trees between streams and harvested areas. Leaving a riparian canopy shades the stream and keeps it cooler and more hospitable for vulnerable species like salmon and trout.

Weyerhaeuser set up permanent monitoring stations in the Deschutes watershed in the early 1970s to track stream stage, discharge and water temperature. The sites were on the Deschutes mainstem, as well as Thurston, Hard and Ware creeks.

The stations were initially part of a study to gauge the role of the company’s harvests on sediment accumulating in the Capitol Lake reservoir on the lower river. That turned out to be an issue of the area’s natural glacial sediments, according to Weyerhaeuser hydrologist and study author Maryanne Reiter. But the stations have since contributed to a unique and useful long-term record of water quality within an actively managed forest watershed.

Forested buffers weren’t a widespread requirement when the study began, Reiter said. They had just been introduced to Oregon and not yet present in Washington. The analysis found “clearly identifiable” effects from timber harvests on small stream water temperatures in the years prior to buffer regulations, according to the paper published in the Journal of the American Water Resources Association. The station on the Deschutes mainstem captured the buffer effects on a large channel. (Credit: Weyerhaeuser)

But as buffers came in, “We’ve watched as stream temperatures on some of the smaller streams recover through time,” Reiter said.

The researchers initially didn’t see any water temperature trends over time on the larger channel of the Deschutes River, Reiter said. But that analysis didn’t include the impacts of the region’s warming climate. When the researchers used the rise in summer air temperatures to account for a bundle of climate changes over the study period, the data revealed a decreasing trend in Deschutes River water temperatures as the streamside canopy in the required buffer area regrew.

“In this case, the change in climate has essentially negated any reductions in maximum water temperatures due to improved management practices,” the authors wrote in the study.

The case was similar for Thurston Creek, where no temperature trends were detected in any summer months until the researchers adjusted for the warming climate. That revealed decreasing trends in June, July and August.

Though this study suggests that a warming climate could be catching up to the cooling effects of buffers along some streams, preserving streamside canopies remains an important conservation strategy for forested streams in the Pacific Northwest. In Oregon, a state forestry board recently voted to widen their required buffers after stream temperature studies found some waters were warming up too much under the old regulations. Oregon’s new stricter standards will still fall short of the buffers required in Washington, according to a report from Oregon Public Broadcasting. The decades that the Weyerhaeuser study spans have brought not only buffer requirements but also major updates to the technology at the monitoring stations. The initial instruments logged data on paper charts and measured temperature using 25 feet of mercury tubing in the creek, “Which now makes our hair stand on end,” Reiter said.

The dramatic change in technology from analog to modern digital instruments required the researchers to figure out the margin of error between techniques and whether it would affect the analysis. It turned out not to be large enough to cause a problem.

“This is one of the longest running studies for actively managed forest and it’s ongoing,” Reiter said. “We hear a lot of stuff on unmanaged or minimally managed forests for stream temperature. So what does it look like in a managed forest?”