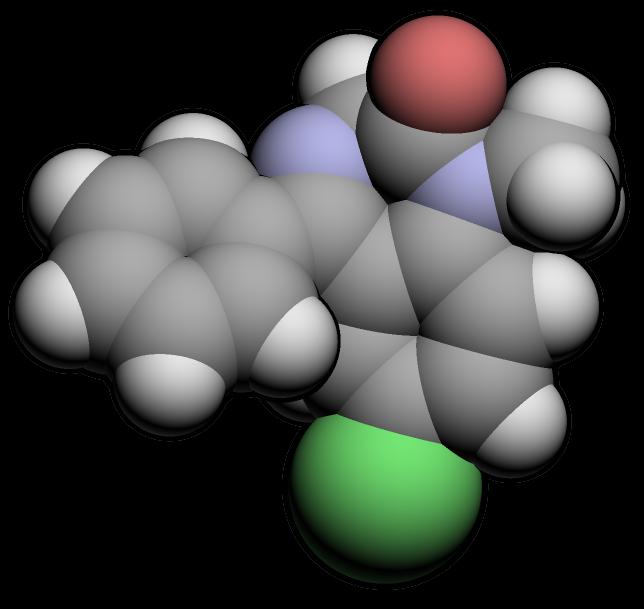 Feeling a little stressed? You’re not alone. In 2008, more than five percent of Americans filled a prescription for a benzodiazepine drug—the class of drugs that include Diazepam, also known as Valium. In wide use since the 1960s, Diazepam is commonly prescribed around the world, making it a frequently seen compound in wastewater, especially in urban areas.

Unfortunately, like the thousands of other pharmaceuticals that end up in our wastewater, treatment facilities are not generally equipped to remove Diazepam from wastewater. This is a serious problem, and it’s getting worse for a variety of reasons. As populations grow, more people take the drug for legitimate reasons; more people also abuse the drug, and both groups of users excrete the drug into wastewater, as manufacturers produce more of the drug to meet higher demands, generating more contaminated wastewater.

Why does it matter? According to the World Health Organization (WHO), Benzodiazepine drugs are psychoactive drugs placed on the essential medicines list. This means the drugs are in wide use, necessary to health management for the patients who use them, and affect the way users feel and think. Researchers at New York State University have found that Diazepam and several other benzodiapezines are present in both unfiltered wastewater and freshwater that has already been treated at about the same concentrations. They also found that psychoactive drugs in surface water “caused measurable toxic effects.”

This is especially troubling given the growing need to recycle wastewater. Safe, effective, and low-cost water treatment techniques that can remove drugs like Diazepam are now on the radar for researchers—who are starting to come through with some exciting developments.

Now, a team led by Professor Vinod Kumar Gupta at the University of Johannesburg (UJ) has developed an efficient, cost-effective technique for removing Diazepam from recycled wastewater and water in a single step. The method makes use of titanium dioxide nanofibers. Professor Gupta’s colleague, Associate Professor Kriveshini Pillay, who is the deputy Head of Department of the UJ Department of Applied Chemistry, conducts similar research and corresponded with EM about the research.

It’s no coincidence that this kind of breakthrough is happening in Johannesburg now. The city has been working hard to prevent “Day Zero,” the day when water runs out and stops flowing from taps in homes and businesses, from arriving. And although the city has managed to push that day off for now, it’s not clear how long Day Zero can be postponed without technological fixes for wastewater recycling.

The team’s titanium dioxide nanofibers target Diazepam and drugs like it by targeting them as part of a photocatalytic decomposition process. It is easy to implement the nanofibers into wastewater treatment plants as part of filters that can treat for not only benzodiazepine drugs, but also other pharmaceuticals, and other organic and inorganic impurities such as pollutants and dyes.

Using advanced nanomaterials makes the removal of a compound like Diazepam easier, because although the Diazepam molecule is minuscule, the nanomaterials are also very small, and well-matched for the task.

“Basically they interact very easily with organic pollutants like Diazepam via hydrophobic interactions due to their chemical similarities,” details Professor Pillay. This means the nanofibers can also be engineered to interact with other kinds of drugs such as antibiotics lingering in wastewater, causing resistance in microbial communities. “Generally antibiotics are hydrophobic in nature. So are carbon-based nanomaterials. So they can act due to their chemical similarities. It is a simple matter of like interacts with like.”

Applied chemistry in a time of industry—and scarce water

Professor Pillay is one of a number of specialists at UJ, working to develop ways to remove all kinds of problematic substances from water.

“My research focuses on the removal of toxic organic and inorganic pollutants, mostly heavy metals, from wastewater using adsorption technology where we develop different adsorbents and test their ability to remove a specific pollutant from water,” describes Professor Pillay. “We also focus on modifying the adsorbents so that they can achieve better selectivity for a specific target pollutant. This is because the composition of wastewater is so complex that if you want to remove a specific pollutant the adsorbent has to be adapted for that purpose.”

The UJ team is also working to ensure that their solutions don’t create new problems once they’re in use: “Recently, the trend in our research has shifted more towards removing the pollutants from wastewater onto an adsorbent and finding a reuse application for the pollutant loaded adsorbent so as to avoid secondary environmental pollution by disposal of the spent adsorbent,” adds Pillay.

Although most of the team in Pillay’s department focuses their research on nanomaterials, that isn’t the sole focus there.

“Some of the students in my research group have also worked on using low cost materials such as pine cone powder, tea factory waste, and orange peels as adsorbents,” comments Professor Pillay. “Recently our focus has also been on conducting polymers and blending these with inorganic materials to form hybrid nanocomposites and nanostructured forms of these conducting polymers.”

The UJ Applied Chemistry researchers focus on all priority pollutants in South Africa, in part because local industries generate different kinds of wastewater ranging from electroplating waste to acid mine drainage. These varieties of runoff are very rich in toxic heavy metals such as chromium (VI), lead and mercury.

“We also have textile industries which have a problem with organic dyes in their wastewater, hence we have worked on the removal of dyes, although there are some other emerging organic pollutants such as pharmaceutical waste which are also becoming a problem in South Africa,” states Professor Pillay. “So the key inspiration is to solve South Africa’s water contamination problems and to ensure the delivery of clean drinking water to all South Africans especially those living rural communities.”