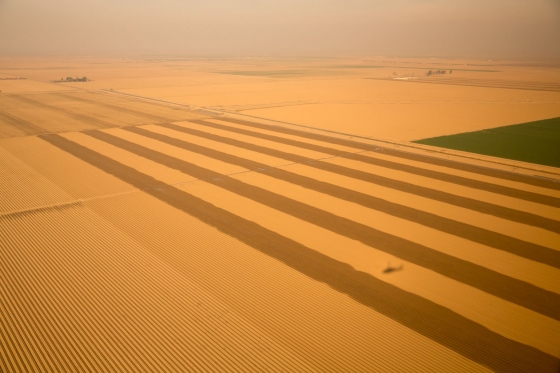 View of California drought in 2014 from Marine One. (Credit: Pete Souza [Public domain])

In drought-stressed areas like California where every drop in the aquifer counts, seismic noise may be the key to monitoring water. Harvard University PhD student and principal investigator Tim Clements spoke to EM about this recent work, and how it might be a game changer for water watchers across the country.

“The inspiration for this research was the historic drought in California from 2011 to 2017,” explains Clements. “This was the driest period in recorded history in the state. We started this research after California had implemented the first mandatory water restrictions in state history in 2015.”

According to Clements, the team focused their study on the San Gabriel Valley in Los Angeles County for several reasons. First, it is home to more than two million people; residents of the San Gabriel Valley (SGV) depend on groundwater for 40 percent of their water needs during times of drought. Second, from 2012 to 2017, water levels dropped more than 20 meters in the SGV aquifer. Finally, the San Gabriel Valley has an existing seismic network—the Southern California Seismic Network—with seismic data archived back to the late 1990s. 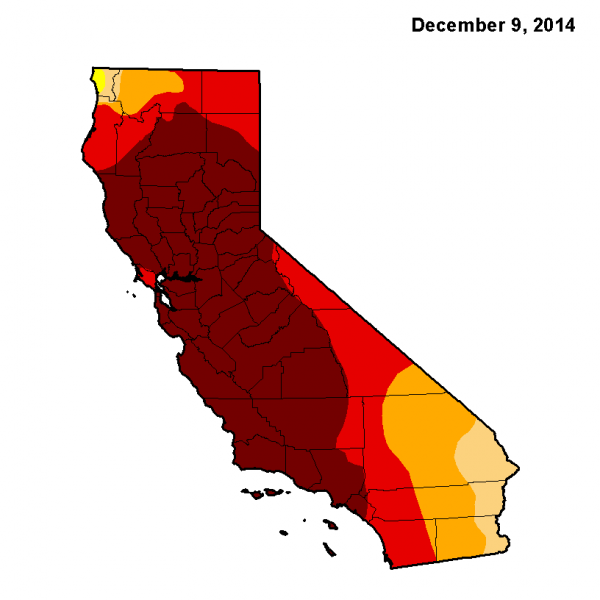 Ear to the ground

Seismic noise is simply noise, or vibrations, caused by anything taking place on or under the ground. Seismologists study it, hoping to identify signs of trouble—such as earthquakes—more readily. Clements believes that seismic noise has a lot to tell us about water, too.

The team then calculates the change in seismic velocity by comparing passive waves—generated by anything from wind to automobiles—measured by a network of seismometers.

“The ‘comparison’ we do is technically called ambient noise cross-correlation, which extracts the wave propagation between two seismometers,” clarifies Clements. “We then apply coda-wave interferometry to the cross-correlation of seismic noise. Coda-wave interferometry extracts the change of velocity through time (in the SGV basin), which in our case is due to changing groundwater levels).”

The method might even be used to track geological changes to aquifers over time as humans pump water out of them, whether aquifers rebound after precipitation, and if they do, how they do it.

“Over the past 15 years there were 3 droughts in Southern California: from 2002 to 2003; from 2007 to 2009; and from 2012 to 2017,” states Clements. “In each subsequent drought, groundwater levels in the SGV dropped below previous all-time low levels. Groundwater levels rebounded quickly in 2005, while the recovery from 2009 to 2010 was more drawn out. We were able to confirm this using the change in seismic velocity.”

The ability for water managers to see these kinds of patterns over time could mean a huge difference in how we decide to shape water policy.

“Having access to this information is important for water management,” asserts Clements. “California is a great example of this, where they implemented water restrictions during the drought. Water managers and politicians implement policies based on their best knowledge of current aquifer conditions. Hopefully, in the future, our method will give policymakers a near real-time look at aquifer conditions.”

Right now, without this technique, researchers can measure water levels at groundwater wells, and then create models to predict the health of the aquifer that connects them based on the measurements and various hydrological parameters. However, that involves not only a great deal of legwork but also a substantial amount of guesswork. The team is now working to establish that the method works for tracking aquifer water—making water depth measurements accurate to within about a centimeter, instead of a kilometer or so, which is the current standard. 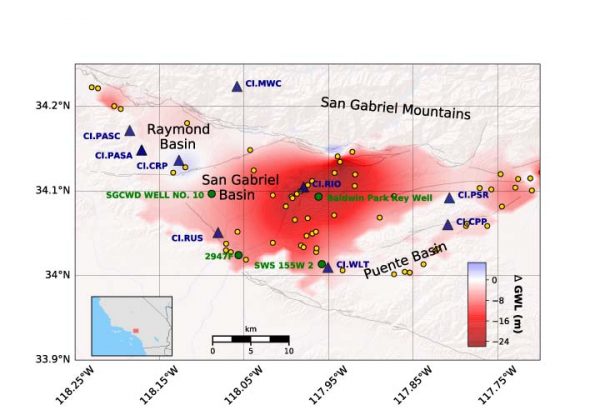 “We installed an array of 5 seismometers at Tufts University during the summer of 2017,” remarks Clements. “We installed the seismometers next a network of groundwater pumping wells. My current research is to monitor groundwater levels and hydrological parameters daily on a local scale—less than 1 km horizontally—using the change in seismic velocity. The goal of this project is to explore the feasibility of the method on a local scale.”

So far, the results look very promising and indicate that experts may soon have a new tool for assessing aquifer health—and achieving other important goals—at their disposal.

“The technique of measuring the change in seismic velocity of the subsurface is relatively new, with the first work coming out about a decade ago,” adds Clements. “Researchers are using the change in seismic velocity to study a number of different natural and human processes and structures, such as volcanic eruptions, melting glaciers and permafrost, responses of the crust to earthquakes, structural monitoring of bridges and buildings and extraction of oil/gas.”

For right now, though, we’ll keep watching—and listening—to its application in the San Gabriel Valley.