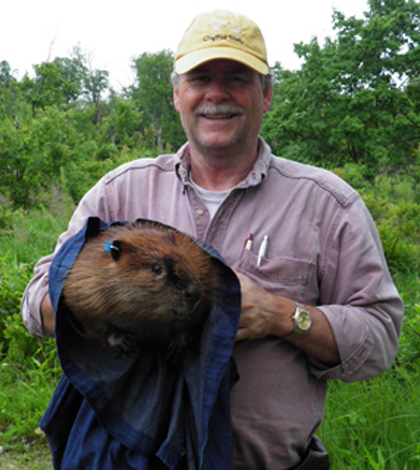 Peter Busher at Boston University uses wire mesh traps to catch beavers; he then transfers them to a denim bag like this one to obtain hair samples for DNA analysis. (Credit: Macauley Mathieu-Busher)

Coinciding with new laws promoting more humane trapping practices, beaver trapping has become a less common activity in the U.S. today. This is starkly obvious when compared to just a few centuries ago, when beaver pelts were often used as a type of currency in what was then known as the New World.

No longer are there such checks on beaver populations and increases in their numbers are a concern for some communities. This is because of their propensity to chew on fences, decks and trees. For those working to protect local waterways, a beaver dam isn’t always a welcome site either.

But as with most animals, there are also ecological upsides to having beavers around. The construction of new dams helps to expand wetlands, which naturally filter toxins out of water, promote biodiversity and reduce the impacts of flooding.

And so there is a good question out there that scientists are still working to answer: Are beavers more of a boon or a nuisance for the areas they inhabit?

Researchers at Boston University are working to answer that question, as well as many others on beavers. They have seen a rise in the animal’s populations in their state, thanks to a 1996 trapping regulation that has helped beaver numbers balloon from 24,000 to 70,000.

A Boston University scientist was the first to track beavers using radio transmitters, helping to build a dataset that now spans 40 years. Thanks to the tags and intricate trapping procedures, researchers at the university have gained knowledge on the animal’s mating habits, group structures, birthrates and migration habits. Over the years, the scientists have seen that beavers are territorial creatures and usually live in family groups. The creatures can also be highly selective when it comes to choosing sites to inhabit over the long term. These characteristics, researchers say, typically yield beaver population spikes when moving into new areas. After a while, though, the numbers most often drop and stabilize.

One key dynamic that Boston University scientists are diving into now is how truly stable the populations are. And it all centers on just how monogamous beavers really are.

The idea is that monogamous beaver populations, those that tend to only mate with one partner for life, increase more slowly and don’t migrate as much. These populations could be easily removed, the results of which would be a long-term gap for beaver habitation. But if beavers are more promiscuous than has been typically thought, control methods used to remove them from areas would prove to be ineffective because new beavers would just move in and create offspring.

To investigate this issue, the Boston University scientists are relying on ear-tagged radio transmitters that show them where the beavers in Boston’s Quabbin Reservoir go from day to day. From these beavers, of which there are about 200 to 300 living on the Prescott Peninsula, the researchers also gather hair samples for genetic analysis.

Getting these samples requires setting wire-mesh clamshell-shaped traps half-submerged in waters that beavers inhabit. In the evening, scientists transfer each caught beaver into a denim bag and then take measurements and hair samples, check the animal’s gender, and tag it before release. The hair samples are ultimately analyzed back in a lab.

The Boston University researchers are expecting that the beavers living on the peninsula are genetically monogamous, but work is still underway to confirm that. Other results of the work, they say, could prove useful to humans in learning how to get along better with beavers. The findings may also improve management strategies so that beavers and humans benefit mutually in areas across the United States that they share.

Top image: Peter Busher at Boston University uses wire mesh traps to catch beavers; he then transfers them to a denim bag like this one to obtain hair samples for DNA analysis. (Credit: Macauley Mathieu-Busher)