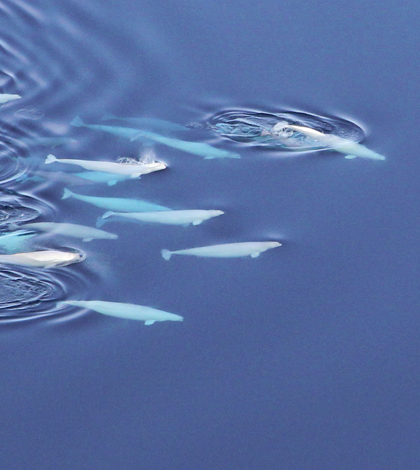 Relative to other marine mammals like dolphins, little is known about elusive beluga whales. Part of this is probably because they live in some of the world’s most frigid and remote oceans.

But researchers at the University of Washington have recently uncovered more insights into the behaviors of these rarely seen creatures. Their work relied on analysis of a long-term beluga data set and actually tagging the whales with tracking devices equipped with satellite telemetry that linked up and beamed their locations to researchers upon surfacing.

The tags are designed to turn on when the whale comes up to breathe and then transmit locations and dive depths to a satellite that relays data back to researchers electronically. Tag technology has improved over time, with researchers noting that they had one tag that stuck on a whale and kept transmitting data for more than 18 months.

The work to tag the whales began in 1993 when researchers collaborated with indigenous communities in Northwest Alaska and aboriginal tribes in Canada to tag beluga whales. Since the whales often swim close to shore during early summer in these regions, it’s possible to capture a whale and attach a satellite transmitter to the dorsal ridge along its back.

Using the tags helped immensely, scientists say, because they provided high-resolution information for the animals even though they spend most of their time underwater and offshore in some of the most remote areas of the Arctic. The scientists focused on two distinct populations of beluga whales that spend winters in the Bering Sea then move north as sea ice melts and open water allows them to pass into the Beaufort and Chukchi Seas. In those regions, they depend on populations of Arctic cod to survive, frequently diving to depths of 200 to 300 meters to find food.

It was for that reason that researchers also kept tabs on distributions of Arctic cod throughout the study. They compared the distributions to the locations and depths where the whales dived. This revealed that beluga whales tend to dive to depths where the cod congregate, and continued to depend on the fish as a major source of food.

Other than the relationship between whale dives and the locations of Arctic cod, researchers noticed that the diving behaviors of belugas are pretty hard to pinpoint. Both beluga populations frequently dived to the bottom of the sea to feed on bottom-dwelling organisms in the northern Bering Sea and Chukchi Sea, but then dived in more mid-depth ranges along areas that sloped from shallow to deep. Scientists think the whales might have been looking for opportunities to eat based on where prey was concentrated by oceanographic features.

As the Arctic continues to change due to rising temperatures, melting sea ice and human interest in developing oil and shipping routes, researchers argue that it will become more important to understand the behaviors of beluga whales. And they think that the results of their study will give future scientists a nice baseline from which to build on that understanding.

Results of the work may help beluga whale management efforts, scientists say, which would protect a valuable resource for native Arctic communities. They also shed light on the animals’ yearly migrations that take place in a fast-changing area over thousands of miles.