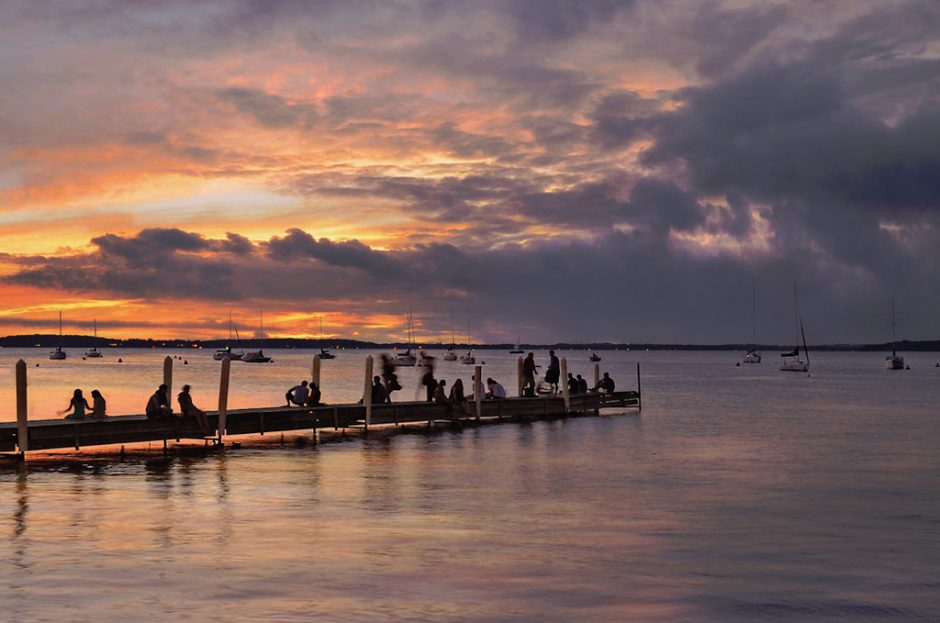 Lake Mendota is known as one of the most heavily studied lakes in the world. And there is no doubt that the lake, which sits by the University of Wisconsin’s Center for Limnology, has seen its share of sampling. But the atmospheric conditions around the lake haven’t been researched quite as much.

Learning more about those conditions is important, as they impact greenhouse gases surrounding Lake Mendota. On a broader scale, the lake’s emissions also chip in their own contributions to global warming.

“While the scientific community has studied the role of various organisms on land and in oceans for some time, we know less about lakes and rivers. And even among lakes, urban lake settings have been less studied,” said Ankur Desai, professor of atmospheric and oceanic sciences at University of Wisconsin — Madison. “Lake Mendota, which has had world-class research on it for decades, seemed like an ideal place to contribute improved understanding of where lakes fit in the global climate system.”

To dissect the gas flux surrounding the lake, he and other investigators at the university have deployed a few sensors on a tower overlooking the lake. The idea is to capture gusts and eddies of wind as they carry greenhouse gases like carbon dioxide in and out of the lake’s surface as well as the organisms that call it home. The approach is commonly known as eddy covariance.

“If we can measure how strong each gust is and how much carbon dioxide or other gases are in that gust, we can back out the net amount of greenhouse gas emission or uptake by the organisms at the surface,” said Desai. Two instruments make measuring those things possible. Wind gusts get tracked by a sonic anemometer, a device that precisely measures vertical wind speed at nearly 60 times a second from variations in the relative speed of sound. Gas concentrations are measured at a similar frequency using fast-response infrared spectroscopy.

Desai says that the tower and sensors are situated on a peninsula in Lake Mendota that provides the station a prime spot for observing gases coming off the lake. It was a result of some luck: The pole had been recently installed as a landmark so boaters could avoid hitting the peninsula, so researchers took advantage by seeking permission to place the sensors there.

The high location helps scientists to sample a larger area of the lake, adding a little more precision to their findings. Those, as well as some expectations, are partly informed by the long-term set of data available on Lake Mendota.

“We have a similar system set up on campus and from that, we know that this particular lake can take up or release carbon dioxide on net over a year. This amount seems to vary with how long the growing seasons is, which is set by when ice breaks up and when fall storms set in to mix the lake up,” said Desai. “With multiple years of data, and coordinated measurements of lake organisms, nutrients and ice thickness, we can estimate how future changes in climate or land use will affect the lake carbon balance.” An anemometer and other sensors on a tower overlooking Lake Mendota help to measure its greenhouse gas flux. (Credit: Jonathan Thom / University of Wisconsin)

A larger goal of the work is to add the data gathered at Lake Mendota to a database on the cycling of carbon in lakes and rivers around the world, Desai says.

“With that, we can provide a more definitive estimate of how much lakes emit or take up. Currently, all ecosystems globally on land and ocean take up nearly half as much carbon as we emit in fossil fuels each year,” said Desai. “This tremendous service keeps the rate of ongoing climate change slower than it would be otherwise. Should this rate of carbon uptake in the future change, it has large implications for the future rate of climate change even for the same amount of fossil fuel emissions.”

All the data, he says, will be shared openly and hopes are that they will help inform important decisions on carbon emissions both locally and globally.

Desai credits the University of Wisconsin campus community and the Long Term Ecological Research program led by the National Science Foundation for making the work possible.