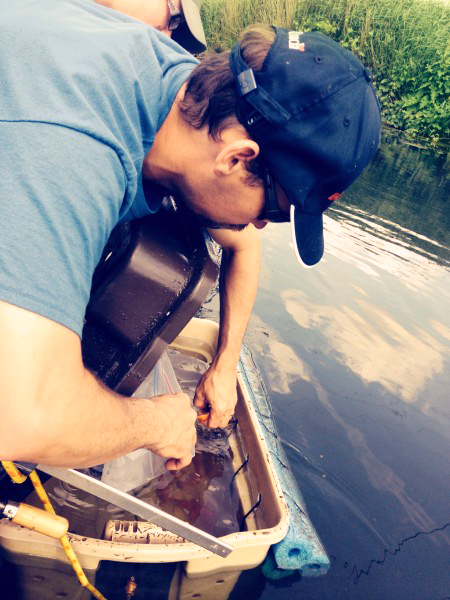 As the apex predator on the block, it’s not always easy for humans to imagine the heightened awareness and sensitivity to surroundings that allow prey animals to survive. But the feelings of relaxation and reduced anxiety that elevated levels of serotonin in the brain, and many prescription antidepressants, bring humans, aren’t productive in other animals. New research reveals that compounds in treated wastewater—antidepressants in particular—affect behavior in fish enough to render them more vulnerable to predators.

Environment Canada research scientist Jim Sherry, along with researchers Derek Muir and Sigal Balshine, authored the study. The team of researchers view fish living downstream from plants that treat wastewater as “water sentinels” that can warn us of the chemicals present in the water that they’re absorbing.

“Fish have been widely used as early warning ‘canaries’ of problems in aquatic ecosystems,” the researchers explain. “For example, feminization effects in aquatic environments were first observed by roach fishers in England who observed mixed sex organs in fish that they caught. The anglers brought the problem to the attention of scientists who pursued the topic.”

Teasing out the effects of antidepressants on fish

For experimental subjects, the researchers caged goldfish from multiple locations within the Cootes Paradise watershed. The watershed has been designated by an international environmental commission as a Great Lakes Area of Concern and is within the plume of a treatment plant. For the control samples, the researchers chose a site in Jordan Harbor on the shore of Lake Ontario.

“We chose goldfish because they are a feral fish species in Cootes Paradise,” the researchers detail. “They are also closely related to wild carp, a problem invasive species in the watershed. Unlike carp, goldfish do not grow large quickly, so they are a good choice for caging studies. We chose male goldfish because we were initially interested in getting a better understanding of estrogenic effects due to exposure to the wastewater. We also wanted to explore whether the caged goldfish could be used as a surrogate for the wild fish as we or others monitor the marsh in future years/decades.” One of the most confounding problems with parsing out the effects of various chemical compounds on fish is that there are so many different compounds now in water—particularly in urban areas—from pharmaceuticals and personal care products (PPCPs), industrial waste, and various other sources. This means the team in this case was challenged with sorting out the various molecules in the water. In this case, the researchers focused their chemical analyses on a suite of 127 PPCPs using targeted LC-MS/MS, a process which is highly selective.

“Of course there were likely many other contaminants present in the water, and possibly also in the fish,” the researchers clarify. “The caged fish were exposed to the full complexity of the discharged wastewater and the recipient water including chemicals that might re-suspend from the sediment.”

Next, the team needed to consider those PPCPs that they detected in the fish plasma together with the observed effects on metabolites and proteins in the blood plasma for the attribution of cause. They analyzed 217-targeted metabolites in fish plasma. Next, they considered whether the observed changes in metabolites, particularly in neurotransmitters, were correlated with the any of the accumulated PPCPs. The team detected several commonly prescribed antidepressants in the blood plasma of caged fish from Cootes Paradise; specifically, they found serotonin uptake/reuptake inhibitors.

“The results of that analysis implicated the SSRIs,” stated the researchers. “Moreover, those exposures and the postulated mechanism were consistent with the observed effects on fish behavior. Of, course, other components of the complex mixture might also play roles. There might also be additional effects that we have not considered. The scientific method, however, requires that relationships be established rather than assumed.”

These SSRIs increased the levels of serotonin in the fish, changing their swimming patterns. The fish were less anxious, took risks exploring more readily, and were bolder overall than were the control fish. These changes meant the fish were more vulnerable to predators, less vigilant and sensitive to avoiding risks.

“We can hypothesize that fish that have become less cautious and might be more vulnerable to predation by predators such as pike,” described the researchers. “The exposed fish were more risk tolerant, when scared by a simulated predator attack they froze but then began moving again more quickly than fish caged in less affected areas. The exposed fish also spent more time higher up in the tank. In the real world, fish that spend more time in the water column are more vulnerable to aerial predator attacks and are further away from structure and shelter on the bottom.”

There is no doubt that these kind of changes can destabilize entire ecosystems.

“Predation is a natural process that contributes to the food chain and the stability of the ecosystem,” add the researchers. “Problems would arise if those systems were to become unbalanced due to externally introduced stressors.”

This research prompts as many questions as it answers. It is as yet unknown whether fish can recover after they accumulate PPCPs at levels sufficient to alter neurotransmitter concentrations and impair ecologically-relevant behaviors. It is possible that their reproductive window is too short and/or sensitive to allow such recovery. The team expresses a certain level of frustration about a general lack of appreciation of the need for safe water reuse and treatment among the public. This lack of seriousness is, the researchers explain, particularly acute in Canada, where streams, lakes, rivers, and coastal areas are so plentiful. Still, they see hope and feel optimistic for the future.

“Education and enhanced efforts to increase awareness will pay off in the long run,” the team members assert. “Most parts of Canada have an abundance of freshwater; nevertheless, the population is increasing and urban centers are becoming more densely populated. So governments, the media, and educators need to increase their efforts to improve public understanding of our dependence on water and on recycled water.”

Water treatment and PPCPs are another topic. The technology now exists to treat waste water so that PPCPs are removed, but it is not widely deployed. The challenge is to deploy those technologies so they are cost effective and reliable. This research and that of others will no doubt help prove the need for more advanced wastewater treatment—and the risks that accompany going without that kind of treatment.

“For this study we used broad and open ended strategies that enabled us to detect exposures, molecular responses, and effects that we did not necessarily expect at the outset,” the researchers point out. “There is much left to learn. Follow-up research can become more focused on the many questions and hypotheses that emerged from this work.”

[The researchers would like to acknowledge that they are indebted to their many collaborators in the study, particularly Drs. D. Simmons, E. McCallum, and B. Chandramouli, and to the Royal Botanical Gardens who facilitated the study.]