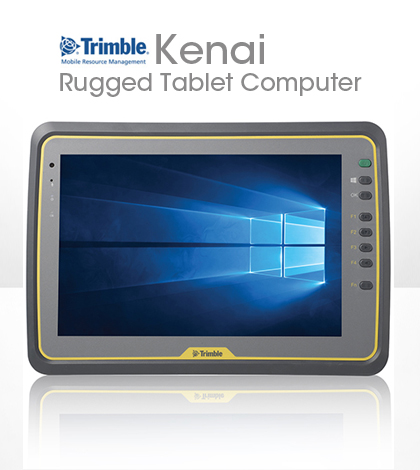 Environmental pros who work in mapping have for some time been limited to handheld computers with small screens that don’t provide a lot of utility. But that doesn’t have to be an issue anymore thanks to the Trimble Kenai Rugged Tablet Computer, which boasts a 10.1-inch screen.

“Customers were loud in their requests for a larger-screen rugged tablet. We already offered the 7-inch display in the Yuma 2 tablet, but they wanted a 10-inch, specifically for mapping applications,” said Craig Newby, product manager.

He says that a lot of prospective tablet customers wanted to make the jump from recording their data with pen and paper but were hesitant to do so because the screens available out there just weren’t large enough.

“It adds a lot of value to their records and to their customers. In particular, the sharp, color-saturated, high-resolution-capable large screen was a clear customer requirement,” said Newby. “Both maps and technical drawings are much more useful in the field with good color and visibility in sunlight.”

The Gorilla Glass screen is also viewable from any angle, which is one feature that separates the Kenai from the rest. In an in-depth review of the Kenai, the folks at RuggedPCReview found that the screen even performed better than Apple’s iPad in terms of screen reflections and its ability to display clearly viewable images without color or contrast shifts. One more key thing to note about the screen is that its size enables the Kenai to robustly support the Microsoft Windows 10 Operating System. It’s a fully capable OS designed more for mobile workers, with cloud-based applications and good security built in.

There are lots of Windows 10 tablets out there, but the Kenai has some key advantages over them. Competing tablets are typically just sealed for moisture, and not ruggedized to the extent that the Kenai is.

“We’ve been having people switch over to Kenai because the tablets they’ve been picking have been lasting only nine months,” said Victoria Gagnon, business development manager at Trimble. “A lot of devices claim to be rugged, but only inside four walls. There’s a difference between rugged for warehouse use and rugged for field use.”

By comparison, the Kenai is fully ruggedized and ready to pitch in during fieldwork. This is underscored by its IP65 and MIL-STD-810 ratings. Hand straps and carrying cases are available as accessories with the Trimble Kenai. (Credit: Trimble)

Along these lines, the Kenai features hot-swappable batteries, allowing for continued performance through even the longest work days. The rugged computer does this by holding enough residual charge to permit a battery change without turning the device off and taking the time to restart. In these cases, extra standard and extended batteries are available for more hours of use. Hand straps and carrying cases are likewise available accessories for those working in the field.

The Kenai is also flexible for use through the many other things that it can connect to, including through USB and Ethernet ports. And for those legacy devices out there, the computer also features an RS-232 port (9-pin serial port), something that other tablets often don’t have.

Trimble has also made it easy in case customers want to use it in the office environment. The office dock sets the tablet to stand like a monitor while it’s connected to a keypad, mouse or other peripherals as it charges.

“We also have a vehicle mounting kit for easy accessibility in a big rig, boat or truck, for instance,” said Newby. “Our vehicle docking station has features which include HDMI, RS-232, Ethernet, GPS / GNSS antenna pass through and more.”

As for maintenance concerns, there really aren’t any. The Kenai is a very reliable device and should provide solid performance like other Trimble handhelds.

“When we build products, we build products that will last for years,” said Gagnon. Trimble customers, she says, expect a good return on investment and some have reported using the Yuma 2 for up to six years. “We really believe in the phrase ‘No downtime.’”

But just in case there are issues, the Kenai comes with a full two-year warranty with the option of an extended two-year, for a total of four years of full coverage. The company also offers global tech support that workers can call from the field if they need to.

Newby summed it up: “This is a no-nonsense tablet designed for professionals in the field.”