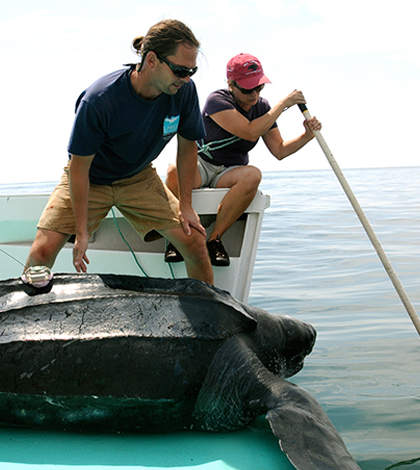 In 2012 and 2013, researchers at the Woods Hole Oceanographic Institution (WHOI) successfully used an autonomous vehicle equipped with an underwater camera, in conjunction with transponders mounted to sharks, to monitor the creatures’ behaviors in deep water. The effort had great success, even capturing never-before-seen ambush tactics.

Following up on that and other achievements of the work, scientists at the institution were interested in using the same approach to study leatherback turtles. In New England’s coastal waters, as in others around the country, the life patterns of these turtles are still largely understudied.

That is in part because the turtles spend most of their time underwater. There are opportunities to study females, as they come up onto beaches to lay eggs. But for male leatherbacks, who never leave the ocean, it’s common for scientists to never see them. And finding them in open water can be tough, though investigators can find some swimming near swarms of jellyfish.

After a successful crowdfunding campaign, scientists have been using what they’re calling a TurtleCam to study leatherbacks. The name hearkens back to the previous work wherein a Remote Environmental Monitoring UnitS (REMUS) vehicle equipped with an underwater camera, nicknamed SharkCam, captured the behaviors of sharks with incredible detail. A leatherback turtle that has had a transponder suction-cupped to its back. (Credit: Woods Hole Oceanographic Institution)

The approach for the TurtleCam project is the same as the previous work. There is simply a REMUS autonomous underwater vehicle that floats around until it picks up a ping from a nearby tracker mounted on a leatherback. These are placed with suction cups and are completely unobtrusive to the animals, as the devices sit on their backs.

Once a ping is received, the underwater glider moves toward it and eventually catches up. From there, the glider follows the tagged leatherback and records its behaviors. Transponders on the turtles also appear to be equipped with cameras.

“It works like an advanced version of the game ‘Marco Polo.’ REMUS sends out a ping (‘Marco’), and the transponder attached to the turtle replies (‘Polo’),” scientists write on the TurtleCam website. “REMUS then follows the turtle, capturing its movements on video and measuring the salinity, temperature, depth and current speed in the water around it.” Videos captured by TurtleCams and the glider are giving investigators unique information about leatherback life patterns and choices. They are also helping researchers to better interpret other sets of satellite tracking data related to the turtles.

The underwater cameras are helping to answer questions related to leatherback turtles’ diets, feeding strategies and dive behaviors. Insights on those dynamics will help in better assessing the threats that the turtles face, from things like fishing gear, passing boats or plastics that they mistake as food. Scientists are also confident that their findings from using TurtleCams will be useful for better educating the public about the endangered leatherbacks and the need for conservation and recovery efforts.

In an updates page on the WHOI website, investigators are sharing some of the things they’re working on with TurtleCam. Notes there share a timeline of the crowdfunding process, as well as more current updates on research. As recent as July 25, 2016, scientists were gearing up for opportunities to tag leatherbacks around Cape Cod and nearby islands.

A nice video of the TurtleCam and REMUS vehicle in action is posted to WHOI’s Vimeo account.