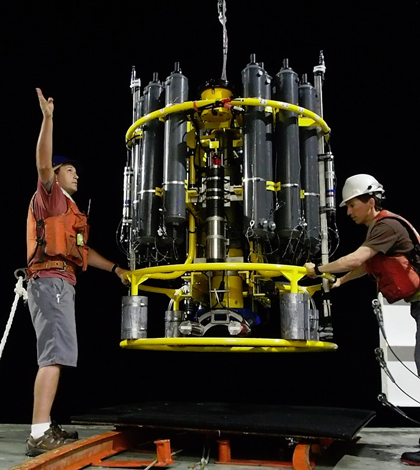 Carbon pathways in the ocean aren’t easy to study. Massive research vessels are needed, first of all, just to get to where samples are to be taken. The cost to rent ship time is nothing to smirk at either. But then you encounter the methods — studying sediments and all the living creatures nearby like phytoplankton and zooplankton — which can be time-consuming.

Scientists at University of Alaska, Fairbanks, have recently tried to make things easier using underwater cameras. They have used the approach during deployments in the equatorial Pacific Ocean.

The specially made cameras researchers employed are far beyond typical, precise enough to show all sorts of particles floating in the ocean water in real time. They call the cameras “underwater vision profilers,” and each one features an onboard computer that can analyze images as well as tabulate data on the number, sizes and shapes of particles photographed. Each camera can sift through six images per second.

With such sophisticated gear, one of their goals is to figure out the relative abundance of each particle in a bid to learn more about carbon movement in the ocean. Measuring the abundances of tiny creatures in the ocean’s water, as well as floating plant and waste particulates, can help researchers evaluate how much carbon they’re contributing to the ocean floor or the atmosphere.

Large particles tend to contain more carbon than small particles. Additionally, their larger size generally makes them sink to the deep ocean more quickly. But researchers don’t yet know how fast carbon makes it to the deep.

Zooplankton can also eat and digest particles, which can alter their size and density. Using the cameras, investigators are looking to see if zooplankton are building up or breaking down certain particles in greater quantities than others, and if these trends vary by zooplankton species. “The camera gives a real-time snapshot of what particles look like undisturbed in the water column,” said Jessica Pretty, graduate student in the School of Fisheries and Ocean Sciences at the university. “The photos we take allow us to see events and features in the ocean that might not be possible to see in the material collected by a sediment trap or other methods.”

Pretty wants to discover whether the cameras can detect differences in the zooplankton communities in two different ocean environments. Her first set of images was taken in the Gulf of Alaska in July 2015. The second set was taken the same summer on a 5,000-mile straight transect between Tahiti, a French Polynesian island in the Pacific Ocean, and Kodiak, Alaska.

Researchers are still working to fully process data from the trip. Their expectations are that there will be different kinds of zooplankton in each of the samples, because the Tahiti to Alaska cruise crossed through habitats that can have varying kinds of zooplankton communities.

Understanding the different paths carbon can take — and the different forms it may travel in — will enhance the ability to determine the carbon-absorbing capacity of the ocean.

“We’ve discovered some interesting and surprising oceanographic features with these cameras,” said Andrew McDonnell, professor in the same school at U. of Alaska, Fairbanks. “They are teaching us a lot about how the ocean’s carbon cycle works.”