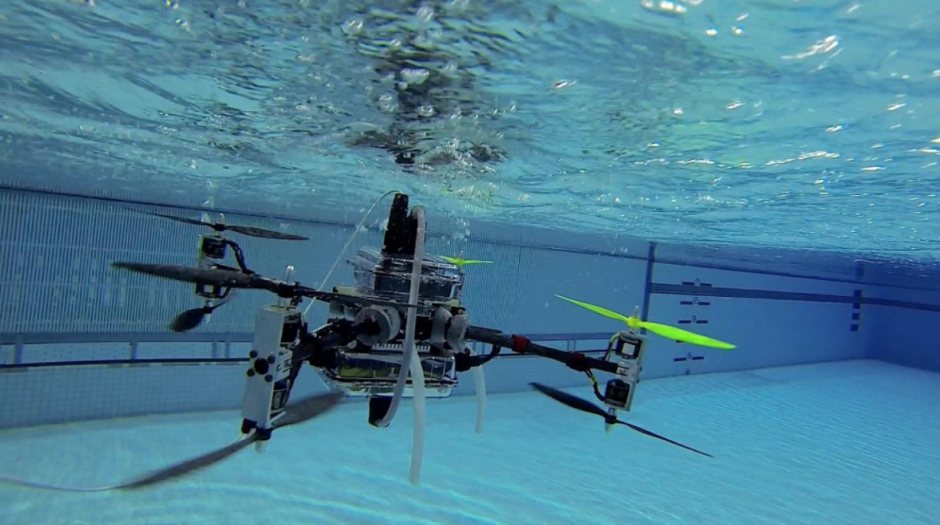 This is what the safety data sheets for some chemicals read like—including, as reported by The Washington Post, the 2014 sheet for crude MCHM, the compound that leaked into the Elk River that year compromising the drinking water supply of most of the state. (The current sheet has been updated since that time, in large part thanks to the 2014 incident.) That incident highlighted just how little we know about the risks associated with many chemicals in use today, and the need to monitor water quality in real-time.

To that end, a recent project undertaken by the Rutgers University departments of Mechanical and Aerospace Engineering and Electrical and Computer Engineering is developing drones and underwater robots that will monitor water quality in reservoirs, lakes, and rivers in real-time. The project will eventually help engineers deploy water quality fixes immediately, and keep contaminated water away from the public.

Dario Pompili, an associate professor of Electrical and Computer Engineering, serves as principal investigator on the project and corresponded with EM about the project.

“Near-real-time water quality monitoring in rivers, lakes, and artificial or natural water reservoirs of different physical variables such as dissolved oxygen, pH, turbidity, chlorophyll, temperature, dissolved metals, and algae concentration is critical in order to prevent contaminated water from reaching the civilian population and to deploy appropriate and timely solutions, e.g., to withdraw water from a treatment plant in the case of an emergency (caused by an accident or a terrorist attack) or at least to issue early warnings so to save damage to human and aquatic life,” describes Dr. Pompili.

For a variety of reasons, standard water quality protocols are often inadequate to the challenges presented by contamination incidents.

“As an example, current practice for water quality management employs static sensors at multiple inlets of a water treatment plant,” explains Dr. Pompili. “A water treatment facility consists of a sequence of physical and chemical treatments such as debris/sediments and minerals primary filtering, as well as taste/odor removal, pH control, secondary filtration via the addition of sodium hypochlorite to inactivate pathogenic microorganism, and disinfection. The chemical dosages of various disinfectants such as chlorine, ozone, and ultraviolet treatment need to be ‘optimally’ adjusted based on the level of pathogens in the untreated water; this is paramount as numerous epidemiological studies have supported the notion that chronic consumption of by-products of chlorination are associated with increased cancer risks.”

Furthermore, basic water treatment methods are not enough to treat some of chemicals such as ammonia; these require additional biological treatments. For all of these structural reasons, if contamination or toxicity levels in the water are too high for effective treatment with standard techniques, temporary shutdown of the entire plant becomes the safest solution. However, to make that kind of decision and justify the tremendous economic and practical impact of the closure, it’s critical to have all the information available at hand.

“In order to make optimal decisions and ‘close the loop’ promptly, it is necessary to collect, aggregate, and process water data in real time,” details Dr. Pompili. “Hence, the goal of this NSF-sponsored research project is to design a Cyber Physical System (CPS) where drones such as the Rutgers multi-medium Naviator, a Hybrid Unmanned Air/Underwater Vehicle (HUA/UV), and autonomous underwater robots (e.g., modified BlueROVs) can (i) first identify Regions of Interest (RoIs) and take measurements as well as, if needed, collect biosamples from them; (ii) and then, through collaborative information fusion and integration, perform in-situ transformation of these measurements/raw data into valuable information and, finally, into knowledge.” CPSs cut costs, deploying quickly and integrating with existing systems. They can also operate autonomous vehicles in both water and air with ease. Ultimately, the team hopes that their unique sensing approach will be easily generalizable beyond the specific domain considered in this project.

According to Dr. Pompili, the vision of the project is to design a novel CPS sensing architecture—consisting of heterogeneous entities with different degrees of abilities in terms of accuracy, fastness, range of sensing capabilities, and temporal and spatial sensing resolution—that extracts the strengths (and hides the weaknesses) of these constituent entities. The final product then will collect raw data, assign semantic meaning to it, and transform it in real-time into valuable knowledge.

The Rutgers team is ideally situated near a natural case study: the Raritan River. This important New Jersey waterway provides a unique monitoring laboratory for developing and testing the project’s technologies.

The biggest corridor of contiguous wildlife in the state, the river is the core of an important habitat for a number of endangered and threatened species. Adding to the intrigue of the area is the ongoing problem of pollution, primarily in the form of leakage from sewage treatment facilities and contaminated industrial areas along with the toxic dumping from industrial sites that has taken place for decades. The environmental woes caused by these problems include more than 16 noxious solids and chemicals infecting the river, including three that threaten the area’s supply of drinking water: heptachlor epoxide, benzopyrene, and arsenic.

Regular monitoring of the watersheds is essential for producing the usable water quality data experts need for decision making and management. “The Raritan Headwaters Association holds a specific stream monitoring program; based on visual assessment and on manual collection of water samples at each site, they can classify coarsely the sites as ‘excellent’, ‘good’, ‘fair’, or ‘poor’,” notes Dr. Pompili.

The project is also consequential for Rutgers, which has a fully-equipped research boat featuring a mobile lab for water sampling and monitoring specifically for use on the Raritan river. The vessel is part of the University-wide strategic plan.

“This 36 ft mono-hull aluminum landing craft, equipped with two Yamaha 250 hp outboard engines was built by Munson Boats in Burlington (WA), and is rated for 20 passengers and 2 crew members,” Dr. Pompili explains. “The boat is equipped with a Universal Sonar Mount (USM) for use with Rio Grande Acoustic Doppler Current Profiler, a 5 KW generator, and a Garmin 1040xs radar/plotter/sounder. The vessel can handle several educational and scientific needs such as trawling, grab sampling, diving, water profiling, coring, AUV/ROV operations, not only for Rutgers but also for the State of New Jersey and other federal agencies.”

The research boat is designed to work with the CPS program, and to enrich the student experience at Rutgers and in the surrounding area as well.

“In terms of outreach, this project will develop a pipeline of diverse and computer literate engineers who will be able to solve self-management CPS problems,” states Dr. Pompili. “The PIs will 1) create a course on real-time in-situ distributed computing (for graduate computer engineering and undergraduate non-engineering majors); 2) develop teaching modules for incorporation into key high-school activities; 3) leverage existing minority student outreach programs and networks at Rutgers; 4) incorporate exchange programs and team-teaching approaches; and 5) utilize distributed education technologies with application to robotics and networking. Our electrical/computer and mechanical engineering team has the theoretical and system-level skills, cross-disciplinary expertise, as well as a verifiable history of fruitful collaboration to exploit fully this project’s research and educational potential.”

The project today and tomorrow

This three-year research project began in September of 2017. As of today, the team has identified several research tasks that will be necessary to achieving their goals.

“[I]n-situ processing of data from sensors in any CPS is, in fact, susceptible to three types of uncertainties arising from multiple sources, i.e., resource, model, and data,” Dr. Pompili remarks. “This project, which will pursue four integrated research tasks, will provide greater autonomy and cooperation in CPSs and, at the same time, will ensure greater scalability, reliability, and timeliness in comparison to traditional sensing systems. The challenges to achieve dynamic collaboration between local and cloud resources will be handled in the first research task, in which novel adaptive-sampling solutions that minimize the sampling cost of a RoI (in terms of time or energy expenditure) will also be developed.”

The team will design novel solutions as their second task to handle model uncertainties in local resources.

“In the third task, we will develop a biosampler, i.e., a ‘lab-on-robot’, that uses in-situ measurements and communicates with the cloud resources to give results in real time on the water quality; also, new solutions to optimize the Naviator’s current hybrid air/water multirotor platform/propulsion system will be designed in order for it to be able to carry and perform testing with the biosampler while also increasing its endurance,” adds Dr. Pompili.

The fourth task will consist of performing integrated field testing on the Raritan with the aim of validating the project algorithms and analyzing their scalability.

“Specifically, the Naviators will identify the RoIs via multimodal operations, i.e., in water and air; and then the BlueROVs (which, during the course of the project, will be made autonomous and will be modified to carry on-board water quality sensors) will perform underwater adaptive sampling in each of those RoIs using the algorithms designed in the first task,” Dr. Pompili remarks.

Ultimately, these robots will function as part of a novel three-layer CPS sensing architecture for near-real-time monitoring of water bodies that is both energy and time-efficient.

“Here the slow-moving manned Lab-on-Boat (Layer 3) is complemented with autonomous vehicles (Layer 1 and 2),” Dr. Pompili explains, referring to Figure 1. “These vehicles, unlike the boat, have less accuracy and narrow spectrum of sensing capabilities (as they rely on on-board compact and energy-efficient passive sensors), but are fast moving, autonomous, and have good spatial and temporal sensing resolution. Furthermore, they are considered fast responders as they can be rapidly deployed from base on a daily basis and are low cost, which allows integration with other more expensive systems already in place such as lab-on-boat.”

This process allows the quicker autonomous responders to investigate and identify problems solo and call for backup from the boat when they discover RoIs that require attention. To streamline the operation and improve efficiency even more, the team also divides the autonomous vehicles into two categories. Layer 1 vehicles can operate in both air and water—the multi-medium drones or Naviators, and Layer 2 vehicles only operate in water—the UnderWater (UW) robots.

“[The Layer 1 drone is] a fast moving multi-medium hybrid drone with cameras and other sensing equipment attached to it. It can therefore identify RoIs both from air—such as polluted areas, areas with algae bloom, oil spills, as well as underwater, such as regions with anomalous pH values—using its on-board sensors,” Dr. Pompili describes. “Although the Naviator has limited spectrum of sensing capabilities and is not as accurate as the boat, it has higher temporal and spatial sensing resolution. Once the Naviator identifies a RoI, it can either summon underwater robots or the boat itself to further process the region based on severity and sensor needs.”

The end result will be a network for smart water monitoring in real-time that will empower decision makers and protect the public. Keep your eyes on the Raritan River to see the Naviators and UnderWater robots in action. Figure 1: Three-layer Cyber Physical System (CPS) sensing architecture for near-real-time water monitoring using heterogeneous and autonomous sensing entities/vehicles. A few multi-medium drones, Naviators, which are autonomous aerial underwater vehicles at Layer 1 with narrow-spectrum sensing capabilities but with fast moving and quick triage abilities; several autonomous UnderWater (UW) Robots at Layer 2 with narrow spectrum sensing but with high temporal and spatial resolution capabilities; and very few Lab-on-Boats at Layer 3 with broad and accurate spectrum sensing capability but slow moving and low spatial- and temporal-sensing resolution. Naviators in Layer 1–which can operate in both air and underwater–quickly identify Regions of Interests (RoIs), triage them, and assign them to a team of UW robots or to a Lab-on-Boat to enhance sensing resolution or accuracy, respectively. UW robots in Layer 2 can coordinate and scan each RoI by performing adaptive sampling. (Credit: authors)