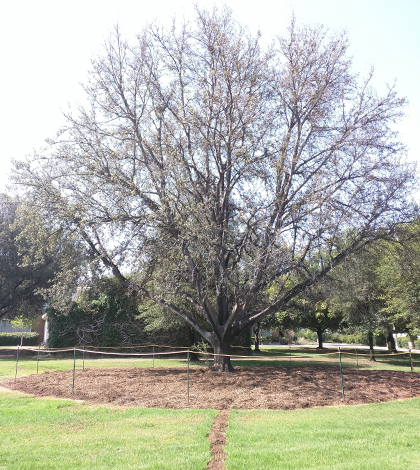 Grounds managers believe the large lawn that the tree is sitting on could be contributing to its problems, as trees and lawns absorb water differently. (Credit: University of California, Riverside)

When you walk through the center of the University of California Riverside’s campus, you will see two large oak trees, often referred to as sister trees. They were planted around the same time that the campus was being developed, some 60 years ago, and have grown into large, shady trees.

But one of them has been experiencing some difficulty and was showing signs of sickness. So with the help of an arborist, Toshio Ishida, assistant director of Landscape and Refuse Services at UCR, took on the challenge of helping the tree before it was too late.

They began by looking at many possible causes of the tree’s decline, including a soil test to see if nematodes might have been a factor, but came up short. The biggest indicator of the tree’s sickness was the north side of the tree. It started to wither around five years ago, and it looked split right down the center up until recently when the other side began to decline as well.

One of the biggest factors in the tree’s decline was construction happening on campus. With all of the traffic and a change in the draining system, the tree had been through a lot. After further testing, Ishida and others found that the soil around the roots was extremely compacted; they had no room to grow. Toshio Ishida and Mark Jones discuss the placement of a soil sensor beneath the oak tree. (Credit: University of California, Riverside)

“We dug holes and did compaction tests and found that from all the traffic and stuff, the soil was very compacted under the root zone of the tree,” said Ishida. “That’s when we started to realize that was part of the problem.”

To fix this, they dug eight trenches from the center of the tree out with an air spade system, a technique that doesn’t damage the roots. The trenches were 2 feet deep and 12 to 18 inches wide. They then filled them with a fertilizer and mulch mix to give the roots nice, airy space to grow.

They also removed all grass growing under the tree so that the roots don’t have to compete for nutrients and water. And now that there is a layer of mulch surrounding it, people tend to avoid stepping on it.

Ishida said he won’t know for at least two growing seasons if the measures they took will help the tree. “Oak trees are very slow, they take a long time to show stress and to show healing,” he said.

But, Ishida said they are hopeful that the tree will return to its former glory.

“Students and faculty have said they are happy to see us try to save it because it is the center of campus,” Ishida said. “It’s a good thing for us to do.”

Top image: Grounds managers believe the large lawn that the tree is sitting on could be contributing to its problems, as trees and lawns absorb water differently. (Credit: University of California, Riverside)