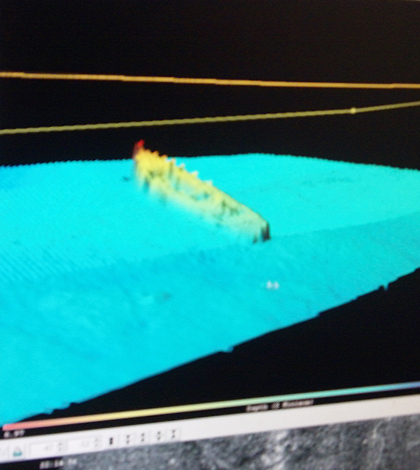 Seattle’s Lake Union is located near the University of Washington’s campus and provides teachers there a good setting for all types of educational activities. For Miles Logsdon, a professor of oceanography at the school, it’s the perfect spot for his class on sonar.

Entering its third year, the class aims to teach young oceanographers how to make scientific observations of what’s going on along the seafloor, as well as show them how to set up sensors and configure multibeam sonar on their own.

“Today’s multibeam sonar data offer much more insight into the ecological processes which shape the seafloor. In the past, we were happy to simply map the depth of the seafloor,” said Logsdon. “Now we’re interested in the sediment type, what is suspended in the water column and how water temperature and density affect properties like the speed and propagation of sound.”

In the process of measuring the depth of the seafloor, Logsdon says, his students are also learning to map acoustic backscatter, which helps researchers measure seafloor composition. They’re likewise learning to measure acoustic waves as they travel through the water column. All that goes into forming a relatively clear image of some of the processes that are in play to shape the ocean environment.

Learning to carry out such scientific investigations helps students learn, but it also gets them used to what they’ll see in the field as professional oceanographers. Tony Dahlheim and students look at the sonar scans. (Credit: University of Washington)

“Too often, new scientists lack the experience and confidence to go beyond the default settings of a sensor and therefore fail to acquire data at the optimum resolution for the process they’re investigating,” said Logsdon. “My main goal for the student experience is build confidence in conducting real research with current technology.”

For the class, that includes a Kongsberg EM302 echosounder and 2040C sonar. Data collected are typically post-processed using ESRI and CARIS software. Using that sort of equipment is important because it’s used in the professional arena every day. They’re also accurate enough to uncover some neat finds.

“It is always great when you see a student discover something that wasn’t already on a chart, or something that hasn’t been reported,” said Logsdon. “So far, we’ve found everything from a pickup truck that somehow found its way to the middle of a lake, a few bicycles and two sunken hot tubs.”

Among some of the more scientific discoveries in Lake Union have been sand waves, landslides, earthquake faults, as well as mud slumps, says Logsdon. “It has had a history of industrial, commercial and military use, all of which has left their imprints on the seafloor,” said Logsdon. “You couldn’t ask for a better classroom to learn seafloor mapping.”

Top image: Sonar scan of the Gypsy Queen, which sank in the 1960s. (Credit: University of Washington)