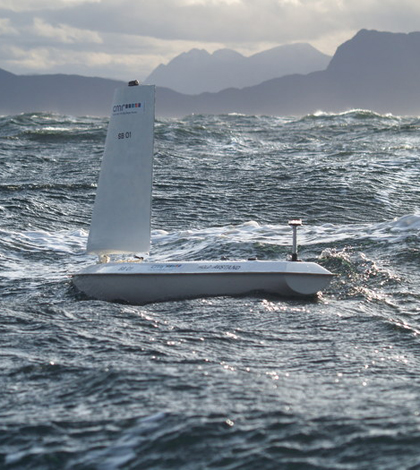 The SailBuoy on the water in another deployment (Credit: CMR Instrumentation)

From two months in 2013, an unmanned ocean vessel developed among the fjords and sounds of Norway sailed among the oil rigs and open water of the Gulf of Mexico. A recently published study details the SailBuoy’s 2,400-kilometer journey.

Bergen, Norway-based CMR Instrumentation’s SailBuoy is a wind-propelled sensor platform designed to handle extended ocean deployments. The vessel, which looks something like a surfboard with a sail the size of an open pizza box, uses satellite communications to relay data from its sensor load and accept navigational commands from on shore.

That made it an ideal tool for the Deep-C Consortium, an interdisciplinary group studying the fate of oil released in the Deepwater Horizon spill to better prepare for similar events in the future.

The consortium includes the Norwegian Meteorological Institute for its experience with oil spill modeling. Lars Hole, a senior scientist with the institute, says he’s interested in “small, remotely controlled devices that can carry out measurements with very low environmental impact and low costs.”

There’s a growing field of such devices, including the wave-powered Wave Glider from Liquid Robotics. But the SailBuoy has its advantages.

“One advantage with the SailBuoy is that it can ‘heave to’ and carry out semi-stationary measurements like an anchored buoy if wanted,” Hole wrote in an email. “The SailBouy can also operate near the coasts in fjords and sounds were you may not have any waves to drive the Wave Glider.”

The Deep-C group, led by Hole and Nico Wienders of Florida State University, launched their SailBouy in the northeastern Gulf of Mexico on March 15 equipped with sensors to measure near surface temperature, salinity and dissolved oxygen. They first directed the vessel to the northern end of the De Soto Canyon, an underwater valley cutting through the continental shelf that was the site of the Deepwater Horizon spill. The canyon is a particularly interesting site for modeling ocean circulation in the Gulf, but in-situ data from the area are sparse. The team paused the SailBuoy’s progress at the head of the canyon in an attempt to capture data upwelling events. They also charted a path through the Mississippi River plume, though they didn’t see what they expected.

“The river plume was interesting because it is a challenge in Gulf of Mexico modeling, and we expected to find strong salinity gradients there,” Hole said. “But we didn’t.”

Instead of lower salinity levels driven down by the influx of freshwater, salinity remained high because flows from the river were lower than usual, Hole said.

Overall, the mission proved to the Deep-C group that the SailBuoy is a useful tool for collecting high-quality measurements across the Gulf. Data from models and moorings along the vessel’s path indicate that the SailBuoy’s sensors didn’t suffer from drift or biofouling. It was more agile and less expensive than ship-based mission, while covering more ground and offering more control than traditional moorings, buoys and drifters.

With the SailBuoy’s ability to collect surface temperature, salinity and dissolved oxygen data established, the group plans to move on to other parameters.

“We hope in the future to put more sensors on the SailBuoy, like wave sensors and acoustical currents profilers (ADCPs) and chemical and optical sensors for tracking oil,” Hole said.

The study describing the mission is published online ahead of print in the journal Methods in Oceanography.

Top image: The SailBuoy on the water in another deployment (Credit: CMR Instrumentation)